Statewide property taxes will drop from 2013 to 2014, according to new information from non-partisan Minnesota House staff, heralding the first year-to-year property tax decline in over a decade. Credit for this goes squarely to progressive state policymakers who enacted major property tax relief legislation in 2013, including a new homestead credit refund and significant increases in school aid and other state aid to local governments.

The collective levies of all local governments plus the state general property tax levy and tax increment financing levies* are projected to increase by $124 million from 2013 to 2014. This represents a 1.5 percent increase relative to 2013, but is a full one percent less than the combined rate of projected inflation and population growth over the same period (2.5 percent). The property tax levies of each level of local government increased less rapidly than the rate of inflation over this period.

While local and state government levies did increase from 2013 to 2014, total property taxes paid in the state declined. This outcome was primarily the result of the new homestead credit refund enacted by the legislature in 2013. The homestead credit refund is essentially a massive expansion of the existing homeowners’ property tax refund (a.k.a. circuit breaker). In 2013 progressive state policymakers increased refund amounts and extended the refund to homeowners making up to $105,500. By virtue of these changes, refunds paid to Minnesota homeowners are expected to increase by $110 million (37 percent) from tax payable year 2013 to 2014.

This increase in homeowner refunds—combined with a $22 million (12 percent) hike in the renters’ property tax refund (PTR) and other minor refund changes—is sufficient to wipe out the entire $124 million levy increase, resulting in a slight $10 million (0.1 percent) decline in statewide property taxes from 2013 to 2014.

Even taxes on rental properties (including apartments and 1 to 3 unit non-homestead residential properties) is expected to decline—albeit slightly (0.1 percent)—from 2013 to 2014 after factoring in increases to the renters’ PTR. This is the first time since 2002 that property taxes for both homestead and rental properties declined in the same year.

The state aid and refund increases in the 2013 tax act not only produced the first reduction in total statewide property taxes in twelve years, but they also allowed local governments to recapture a portion of the steep decline in real (i.e., inflation-adjusted) per capita revenues since 2002. The following is based on information for the most recent “Price of Government” report converted to per capita amounts and expressed in constant 2014 dollars to adjust for the effects of inflation. The amounts presented below do not include the effects of the homestead credit refund and the renters’ PTR increases. 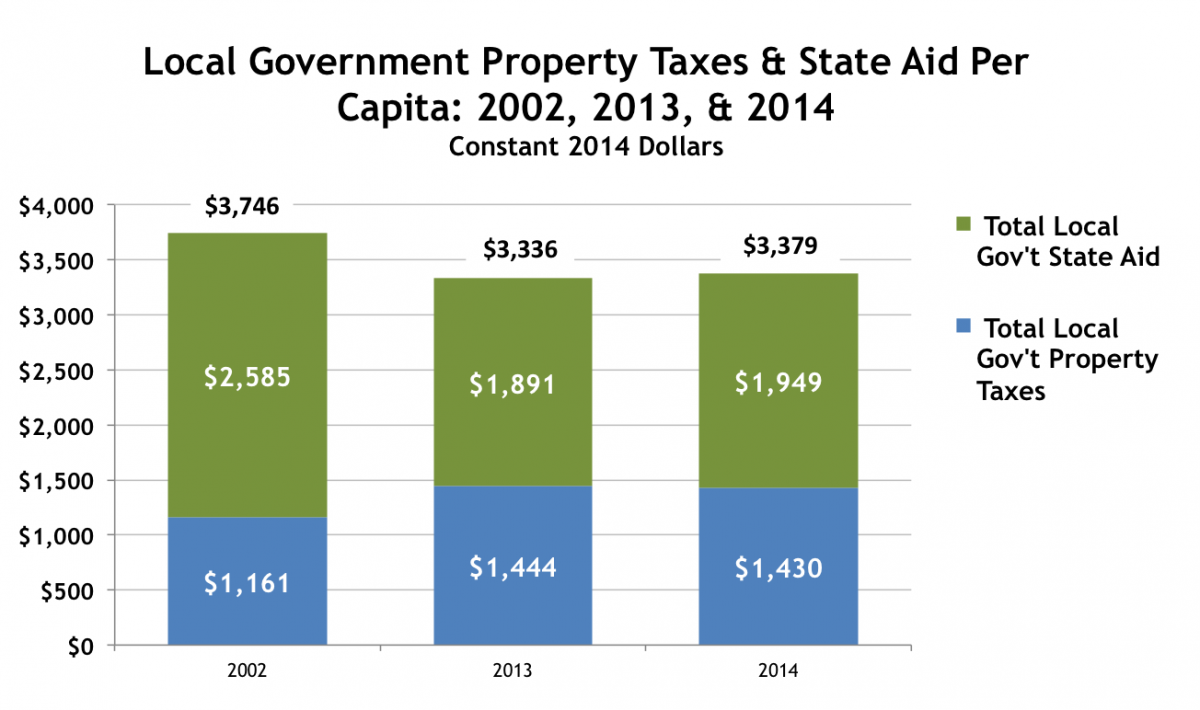 The increases in aid to schools, counties, cities, and towns enacted last year will allow the dollars that local governments receive from both property taxes and state aid to increase from $3,336 in 2013 to about $3,379 in 2014, a 1.3 percent increase above what was needed to keep pace with inflation and population growth. However, even with this increase, per capita local government revenue from state aid and property taxes will remain $367 or nearly ten percent less than it was a decade ago.

Conservative legislators have complained that the increases in state aid to local governments contained in the 2013 tax act were used to pay for increased public spending. While some of the new aid dollars undoubtedly translated into property tax relief, it is certainly true that some of the aid increase did pay for increased county, city, township, and school district expenditures.

However, the increase in state aid and levies from 2013 to 2014 was sufficient to replace only about one-tenth of the real per capita loss in these revenues that local governments absorbed since 2002, as conservative policymakers choose to shift the burden of state budget problems on to local governments (and local property taxpayers) through repeated state aid cuts rather than enact a progressive state tax increase. Neither local elected officials nor progressive state policymakers need to apologize for the fact that a portion of the 2014 aid increase was used to pay for reducing class sizes, restoring funding for infrastructure and public safety, or partially undoing the other harmful effects of conservative decisions to slash state aid to local governments over the preceding decade.

The new homestead credit refund and increases to other aid and refund programs enacted last year reduced tax regressivity in Minnesota through the first reduction in statewide property taxes in a dozen years while simultaneously allowing local governments to restore a small portion of cuts to public investments that had occurred over the preceding decade. By any reasonable standard, the property tax relief measures in the 2013 tax act were a huge success.