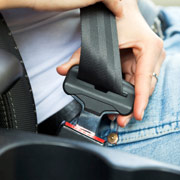 Libertarians screamed when Minnesota finally got serious about enforcing its seat belt law in 2009, allowing police to stop and ticket scofflaw drivers without observing any other infraction. But some of those critics might be alive and healthy today thanks to this common-sense measure.

A new University of Minnesota study found that over the first two years of the new law an estimated 68 lives were saved in crashes, while 320 severe injury collisions and 432 causing moderate injuries were averted. Minor injuries increased by 442, likely taking the place of more serious maiming of the beltless.

In addition, something to warm libertarian hearts also occurred. Negative economic impacts of crashes were reduced by $45 million, including nearly $10 million in taxpayer-supported health programs. So it’s no surprise that surveys show 70 percent of Minnesotans were pleased with the primary seat belt law two years after enactment, compared with 62 percent beforehand. Even better, seat belt compliance in Minnesota is up to 93 percent from 87 percent in 2008.

Meanwhile, Minnesota traffic deaths have been on a long, steep decline to an estimated 366 last year, barely half of the toll in 2002. Sadly, this year is running more deadly, with 19 more traffic fatalities recorded than at this point in 2011. The mild winter may have contributed to that.

But some Minnesotans, especially in rural areas, still need persuading to buckle up. Extra seat belt patrols are on the roads this week in the top 10 counties for unbelted deaths and serious injuries, all outside the Twin Cities: Cass, Itasca, Mille Lacs, Morrison, Olmsted, Renville, Rice, St. Louis, Stearns and Winona. The law enforcement blitz is accompanied by a media outreach warning folks to “Click It or Ticket.”

Public safety is government’s primary responsibility, and that includes making sure every driver and passenger has the life-saving protection of a seat belt on the roads we share.