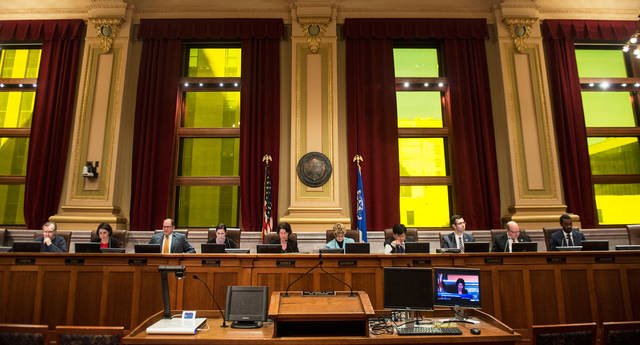 The Minneapolis City Council gathered at City Hall on Friday morning. Ward 2 Councilman Cam Gordon introduced a proposal that would require rental property owners to disclose the results of environmental contamination tests to tenants in designated areas, in response to the trichloroethylene (TCE) contamination of the Southeast Como neighborhood. (Photo by Chelsea Gortmaker)

A current city ordinance already requires property owners to inform tenants of contamination testing results, but most chemicals aren’t included in the reporting. The City Council is considering a proposal to expand the code’s reach — a change many say is long overdue.

At a council meeting Friday, Ward 2 City Councilman Cam Gordon, who represents some University-area neighborhoods, introduced a proposal that would require property owners to disclose the results of environmental contamination tests on properties in designated areas.

Current city code only requires reporting on arsenic testing at a site in south Minneapolis.

“We’re going back and filling in some gaps that previously should have been filled in,” said Ward 3 Councilman Jacob Frey.

If passed, Gordon’s proposal would require rental property owners to complete environmental contamination tests if the Minnesota Pollution Control Agency requests them. The city could revoke the owners’ rental licenses if they do not comply.

He drafted the proposal after the Minnesota Pollution Control Agency and the Minnesota Department of Health notified Southeast Como residents in November that authorities would need to test properties for potentially dangerous levels of trichloroethylene vapor, a chemical linked to liver and kidney cancers.

Since then, Gordon has worked with Southeast Como residents and rental property owners to address the TCE issue, said Ricardo McCurley, neighborhood coordinator for the Southeast Como Improvement Association.

“We support it,” he said. “It’s just a matter of extra information.”

McCurley said Gordon thinks the existing ordinance has adequately strict requirements and consequences, but he would like to see it become more encompassing.

“For some reason, we were specific about arsenic as the environmental contamination, so now we are going back to make the requirement broader than just arsenic,” Heidi Ritchie, policy aide to Frey, said in an email.

General Mills dumped TCE on its former Hennepin Avenue property between 1947 and 1962.

The chemical seeped into the surrounding groundwater and vapors remain in the soil, said Hans Neve, a supervisor with the Minnesota Pollution Control Agency Superfund program. The state’s pollution control group had to get approval from landowners to test properties for TCE, he said.

After testing for TCE in Southeast Como, officials determined that some homes would need ventilation systems to keep the chemical from building up indoors.

He said some residents have tried to sell their homes since the TCE issue came to light in the fall, but very few buyers are interested.

Frey, who represents some University-area neighborhoods, is vice chair of the committee that will review the measure. He said he supports the change and believes it will pass without serious opposition from City Council members.

Gordon described the issue as “a right to know for the tenants.”

“We just need to get this information out in the open,” McCurley said.

‘Why are we hearing about it now?’ Southeast Como residents urged to test for toxic vapors under their homes, by Bill Huntzicker (TC Daily Planet, November 2013)