As organic as the plants and the soil they’re planted in, Project Sweetie Pie is growing. “It’s about the kids, they are our future,” said Bunmi Odumuye of Renewables Research and Policy Institute, one of a growing number of organizations and individuals participating. He’s interested in passive irrigation systems and teaching kids to do research.

“Project Sweetie Pie is an initiative to build healthy neighborhoods by controlling the food distribution system. Project Sweetie Pie is a small part of a worldwide movement to build sustainable and resilient communities. Simply put, we build urban areas into safe productive places to live where neighborhood residents have active opportunities to assist in the feeding of their families,”said promoter Michael Chaney.

Various individuals have offered land to garden on. Neda Kellogg stopped by one of the plots, 1422 Oliver, on June 25 as a bunch of teens were busting up compacted soil barely dry enough from the recent rains. 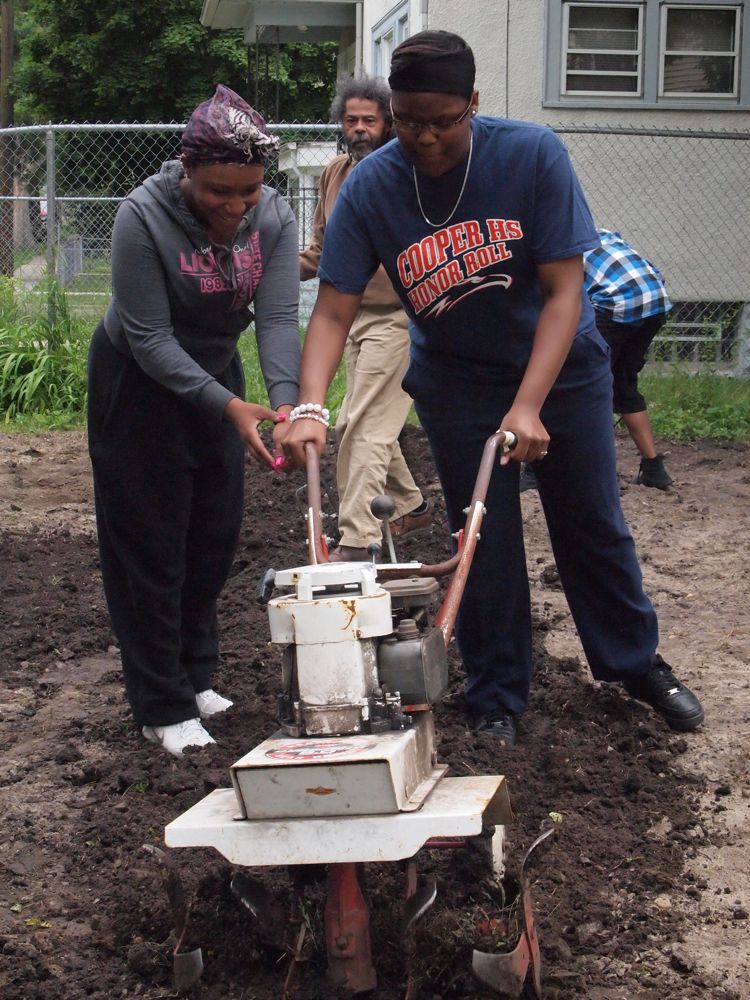 Youth learn to manage a tiller, readying the soil for planting at 1422 Oliver Ave. N. Others used shovels and between them, made quick work of it.

Her program, Project Diva, meets October through June, “so I’ll be pulling the new girls in to help out. I want to show them how to do for themselves, and about healthy eating. It would be great to hook up with a local coop” instead of going to pizza places, Kellogg said.

Immanuel Jones is one of several youth hired to mentor others. At 16, he formed Eco City Minnesota through the JEM Junior Entrepreneurs of Minnesota based at UROC, the University of Minnesota’s Urban Research Outreach/Engagement Center. He said he would like to add Americana chickens from Brazil to the project. He has kept chickens at home.

Nancy Ward, a Master Gardener, requested more compost, the crumbly brown-black organic matter they’ll incorporate with the soil as they plant each tiny vegetable. Not to be confused with mulch, which keeps the weeds down and slows down water evaporation. She put me on to Ian McNamara, a landlord in Phillips, who started some gardens to make his property more attractive and encourage residents to get to know each other. “They’re psyched about it. It has helped greatly,” he said.

There’s enough space for kids, and they raise a fair amount of fresh produce. The tenants are “almost entirely low income,” and its helped slow down turnover.

Sweetie Pie is about making these random connections. There will be a place for anyone interested in food, gardening, health, youth, or community, whether it’s working the soil or funding supplies and mentors. To connect, page Michael Chaney at 612-534-6403 or email  mvchane@netscape.net.

Note: “Sweetie Pie” refers to sweet potato pies. Minneapolis Mayor RT Rybak has used the example of Rose McGee (who has a day job), unable to buy locally grown sweet potatoes for the pies she bakes in her part-time catering business. That’s because the growing season in Minnesota isn’t long enough. Project Sweetie Pie was born when it was envisioned that sweet potatoes could get started early enough in the hot house at North High School. McGee confirmed that if the sweet potatoes were of decent quality, she would indeed buy them from the students.