Photo by Justin Elston. Photo below by Jay Gabler.

“The whole idea was just to welcome—welcome all these people. If they’ve never been felt welcome before, we are welcoming you now, and we want you to feel that.” said Gina Rios, a junior at the Minneapolis College of Art and Design (MCAD), talking about her ongoing work in Project M—a two-week-long initiative of 14 people seeking to use their knowledge and skills in art and design to help their community.

The products of their work quickly became public, though in an unlikely gallery space: the sidewalks along the Whittier neighborhood. Welcome mats, almost 350 of them, each screen printed on donated carpet fragments with a simple “welcome” emblazoned across their face like the one above, were placed on the sidewalks all around the neighborhood during the early morning hours of Saturday, July 10th. That night the Project M team split up into three vans filled with the mats they had just produced during the Blitz—a 48 hour design-and-produce mini-project that led to the mats—and dropped them off in the sidewalks in front of homes, churches, and businesses throughout the area. Their hope was that they would add something positive to the community, a community they live in as well. “Minnesota is your home, and we want you to feel safe and we want people to interact with each other,” said Rios.

MCAD’s Project M group is only the most recent incarnation of a much larger, national initiative, started by John Bielenberg in 2003. The concept of Project M came from Bielenberg’s introduction to the work of Samuel Mockbee, who won the MacArthur Foundation Genius Grant for his work in socially-inspired architecture projects. Starting from this template, Project M groups have come up with a wide variety of community design initiatives, including opening a “Pie Lab” in Greensboro, Alabama, where local residents were encouraged to come in to a restaurant and design studio to enjoy coffee and pie while having a conversation with designers about community problems, and how designers could help. That project had built on the foundation of relationships from an earlier Project M initiative, one that focused awareness on the struggles of impoverished residents who did not have indoor plumbing in their homes. Other projects have converted an ambulance into a mobile art studio and then driven it to post-Katrina New Orleans to assist displaced artists, and designing and building a community park and art project in Baltimore, converting one of the more blighted parts of town into a symbol of hope and strength for a community.

While many previous Project M initiatives have highlighted areas that have been run down, and where suffering and economic decline have set in for many years, in the Whittier neighborhood members of the Project M instead found a vibrant community that needed simply to feel comfortable with what it is, and embrace its own diversity as a strength. “One thing we wanted to do is more celebrate the area of Minneapolis and the Whittier neighborhood—instead of finding a problem and fixing it, it was more of a celebration of what’s already here,” said Emily Reile, a senior at MCAD. “We’ve been spending a lot of time in the Whittier neighborhood, and it’s very diverse…and we were thinking of this idea of home, and what it means that this neighborhood is your home.” 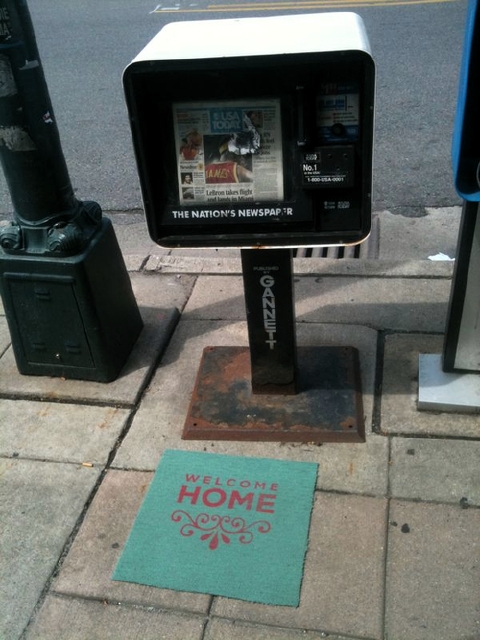 Reile explained that the idea underpinning Project M is that people are very good at thinking in patterns, because those patterns help us enormously with getting through everyday life. However, for problems that continue to plague communities—poverty, injustice, crime—normal thinking has failed to come up with an effective answer. What we are left with is to “think wrong,” to approach old problems in new ways.

And what did neighborhood residents think of the community art project after it was described to them? “That’s a nice idea!” said Lori, a longtime resident of the Whittier neighborhood. “It’s cool!” said her friend Millie, who manages a business in the Nicollet area. Several residents initially expressed confusion about what the floor mats meant, or where they came from, though overall reaction seemed to be positive once the meaning was explained.

“It’s nice to reinforce the idea that, whether you’ve been here 30 years or 30 months, you’re home,” explained Marian Biehn, executive director of the Whittier Alliance, the local neighborhood coalition that encompasses the Whittier Neighborhood.

The final phase of the program has yet to be determined. One of the rules for Project M groups is that they depend on the individual members to decide what the projects end up becoming, how they are completed, and when the project ultimately ends. The spontaneity of such a process can be a challenge for individuals used to a set way of thinking or completing a task, which ultimately the most important lessons of Project M: making a difference sometimes requires us to “think wrong” in order to make something right.