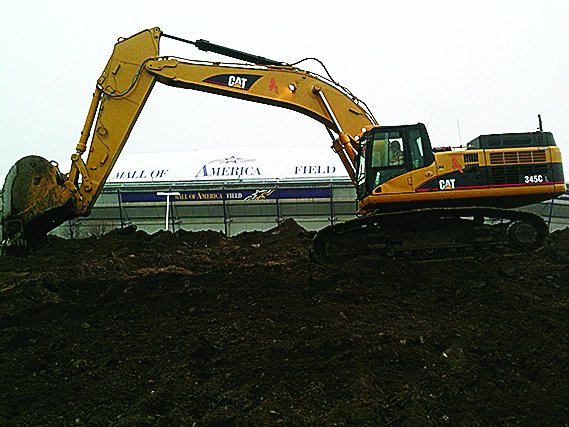 An excavator went to work right after the ceremonial December 3 groundbreaking for the new Minnesota Vikings football stadium.

Work on the new $763 million Minnesota Vikings stadium — officially the “Minnesota Multi-Purpose Stadium” — will be an all-union job.

Construction will involve an estimated four million work hours. At construction peak, some 1,300-1,400 workers will be on-site.

The public authority which will own the stadium, the Minnesota Sports Facilities Authority, required project contractor M.A. Mortenson Company to negotiate a “Project Labor Agreement” with the Minneapolis Building and Construction Trades Council.

A Project Labor Agreement serve a public purpose by ensuring that the work on the project continues on schedule without any labor disputes.

The 14-page agreement, signed November 22, 2013 commits the unions to no strikes or slow-downs and commits the contractor no lock-outs during the construction of the stadium.

The agreement also makes the job an all-union job by recognizing the jurisdiction of the two dozen Building Trades unions named in the PLA.

Both parties to the agreement also commit to a grievance and arbitration process to resolve any issues or disagreements that may arise.

“It’s the largest Project Labor Agreement in the history of the state,” said Dan McConnell, business manager of the Minneapolis Building and Construction Trades Council.

He noted that the Council has entered into many PLA agreements with Mortenson in the past, including for the construction of Target Field.

The PLA commits both parties to use good faith efforts to meet the diversity goals for the project workforce established by the MSFA: 32 percent minority and six percent female.

The PLA is a win-win-win for the Building Trades, Mortenson, and the MSFA, McConnell said. “It’s going to mean the project will be done by good quality contractors and hard-working union men and women.”

Ironically, McConnell noted, “the first PLA we ever did was with the Metrodome,” which will be torn down to make way for the new stadium.