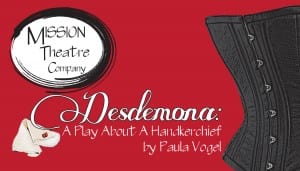 I know, I know, I should probably limit myself to talking Fringe, but sometimes there’s just too many other great projects going on. So here’s something to actually *go out and see* in the upcoming weeks, as opposed to reflexively reloading the Fringe site 69,105 times.

SHOW TITLE: Desdemona: A Play About A Handkerchief
PRODUCER: Mission Theatre Company
HAILING FROM: Minnesota
SHOW DESCRIPTION: As the wrongly accused and suffering wife of Shakespeare’s tragic Moor, Othello, Desdemona has long been viewed as the “victim of circumstance.” But as Pulitzer Prize-winner Paula Vogel demonstrates in her comic deconstruction of Shakespeare’s play—aligning tongue-in-cheek humor while raising serious questions as to the role of women through the ages—Desdemona was far from the quivering naïf we’ve all come to know.
WHAT CAUGHT MY INTEREST: I had the pleasure of working with the founder/producer, Andrea Rose Tonsfeldt, when I directed her in my romantic comedy Penner vs. the Hydra back in February 2011. She was a standout, by which I mean my directing process was basically me saying “By the way, I forgot to mention that you’re manipulating a giant puppet, here’s a pair of ski poles and some goddamn duct tape, let me know if you need anything” and walking away, which she took in admirable stride. So, yes, I’m keenly interested in seeing anything she puts together.

We are Mission Theatre Company – the Twin Cities newest performance practitioners. I am Founding/Artistic Director Andrea Tonsfeldt; actor, costumer, producer, etc! MTC was created as an expressive outlet for me when living in Iowa (what else is there to do!) When I moved to Minneapolis in 2009 I brought MTC with me. The company has been dormant for a while and in February I decided it was time to shake off the dust to that is why we are doing Desdemona: A Play About A Handkerchief July 12-20, 2012!  MTC strives to create theatre that is entertaining as well as engaging and thoughtful. Our first productions have been female centric but that is not the focus.  We will continue to solicit work that enriches audiences and participants alike. That is who we are today…

The big idea is Desdemona: A Play About A Handkerchief! In this feminist retelling of Shakespearee’s tragedy Othello, written by Pulitzer Prize-winning plyawright Paula Vogel (How I Learned to Drive), the Moor’s wife Desdemona (Abby DeSanto), Iago’s wife Emilia (Andrea Rose Tonsfeldt) and the prostitue Bianca (Anneliese Stuht) emerge from teh background to drive the action. This daring deconstruction of Shakespeare’s tragedy gives audiences a glimpse into “real” life on the island of Cyprus and a peek into what goes on behind closed doors while the devious Iago goads Othello into a jealous rage. As it turns out, there’s far more to Desdemona than the original Othello reveals. Perhaps Vogel’s Desdemona is not as innocent as the original seems, but she is much more real.

We are doing this show because it was time for Andrea to perform again…And it is a fun and exciting story of friendship, fighting, stereotypes and preconceived notions.