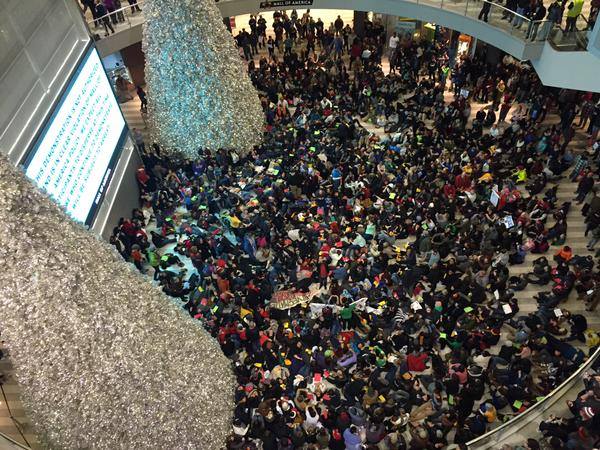 The #blacklivesmatter protest at the MOA.

University professors and researchers are joining the call for City of Bloomington prosecutor Sandra Johnson to drop charges against organizers of a “black lives matter” protest at the Mall of America in December. The protest was in response to highly publicized police violence against blacks in Ferguson, Missouri and New York City as well as some cases in Minnesota.

117 university professors and researchers based mostly in the Twin Cities metro, but some from greater Minnesota signed an open letter calling the plan to charge the organizers “political persecution.”

“We are deeply disappointed in the City of Bloomington’s decision to use its considerable power to actually add to the obstacles that are blocking the movement toward a better, more peaceful, and more just society. We urge the City of Bloomington to drop all charges against those who participated in the recent peaceful protest at the Mall of America.” (Full text of the letter is below)

The letter comes a day after more than 100 faith leaders signed a similar open letter.

Eleven people will appear in court on March 10th for their arraignment on charges ranging from trespassing to disorderly conduct for their attendance at the peaceful demonstration which included nearly 3,000 individuals on December 20, 2014 at the Mall of America.

Bloomington City Attorney Johnson issued her own open letter on Tuesday responding to the faith leaders. In it she said “the criminal justice system must look at the conduct not the content of the messages behind the illegal conduct. To approach protest or demonstration cases any other way would result in viewpoint discrimination based upon the popularity of the message with the prosecutor and with the community. Think about the context of the 1960s in the deep south of this country. If the standard was that- when the content of the message was socially popular the otherwise applicable laws did not apply – many social injustice would have been perpetuated. Justice must focus on the law- as it is written;and the conduct- as it can be proven.”

The open letter that was sent to Bloomington City Attorney Sandra Johnson from the group of researchers and college professors:

The recent activities and aspirations of the Black Lives Matter movement have shown the country and the world how we can truly honor the legacy of Dr. Martin Luther King, Jr. and his non-violent work toward a just and equitable society. As educators and researchers, we understand the hard work that is currently needed to overcome the many challenges and obstacles that prevent every community and every person from being treated with dignity and respect, from having racial justice, and from living in safe and peaceful conditions. We the undersigned therefore strongly support the aims and actions of the Black Lives Matter movement. We support their courageous work toward a world where all people live securely, with freedom and justice.

At the same time, those who are privileged enough to have resources and power in our society should put them to use to move our country in the direction of achieving the goals that Dr. King and countless other activists have struggled towards. This is the work that the Black Lives Matter movement carries on today. It is for this reason that we are deeply disappointed in the City of Bloomington’s decision to use its considerable power to actually add to the obstacles that are blocking the movement toward a better, more peaceful, and more just society. We urge the City of Bloomington to drop all charges against those who participated in the recent peaceful protest at the Mall of America.

We stand united with University of St. Thomas Law Professor Nekima Levy Pounds, one of the protesters charged by the City of Bloomington, when she writes in the Star Tribune (1/16/15):

“#BlackLivesMpls organized a nonviolent, peaceful demonstration at the Mall of America (MOA) in Bloomington, one of the most visible locations in the country. On December 20, 2014, 3,000 people from all walks of life descended upon MOA to sing, chant, and to remind the world that #BlackLivesMatter. Rather than welcome the demonstrators into MOA, we were met by police in riot gear. In spite of the demonstration being peaceful, roughly two dozen people were arrested, stores were shut down by mall security and police, and exits were sealed. What started as a demonstration of Dr. King’s vision of the ‘beloved community,’ became a reminder of what Dr. King warned could destroy our nation: The triple giants of racism, militarism, and extreme materialism. All three of those giants were present that day at MOA and they set out to crush the spirits of ‘the little guy.’”

And we fully agree with Prof. Levy-Pound’s conclusion about the City of Bloomington’s charges:

“This amounts to political persecution and is a gross misuse of prosecutorial discretion and a waste of taxpayer dollars. Thankfully, these intimidation tactics will not be effective in shutting down our movement. Our voices will only grow stronger in the process.”

We urge each and every person who supports the goal of creating a peaceful and just society to raise their voice in support of the protesters.