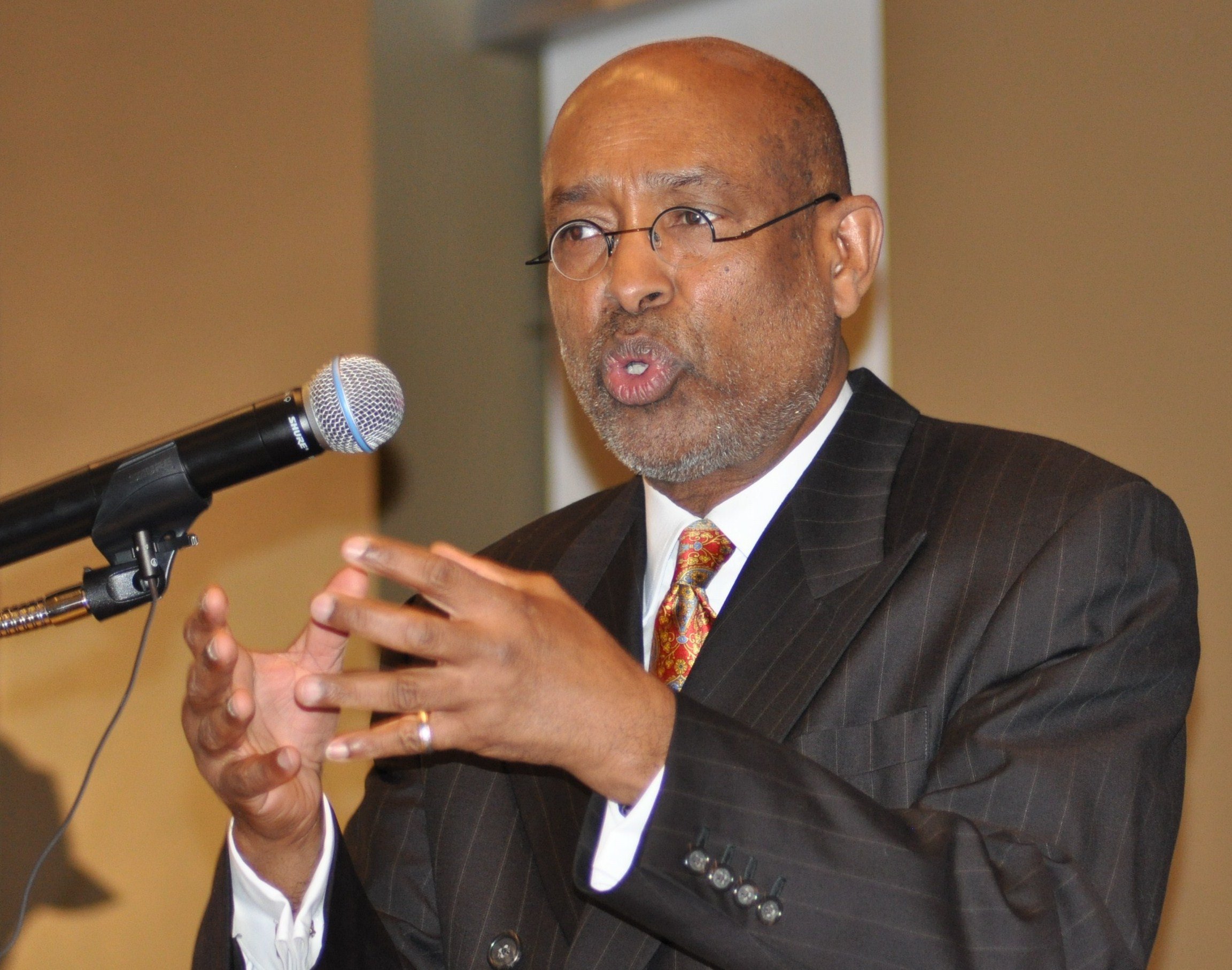 Professor Ahmed Samatar has been a leading advocate for a united Somalia and a strong critic of the country’s clan-based political system that continues to divide Somalis. Demonstrating his views through academic writings, interviews and speeches, Samatar once described the current Somali politics as “sewage.” In a recent speech, Samatar described a shift in his opinion, from advocacy for a completely unified Somalia to advocacy for independence for Somaliland.

In recent years, Samatar has shifted his role from being a mere political commentator to being an active participant in the process of redefining the politics he’s disparaged for decades: He recently served as a member of the Somali parliament and ran for the presidency last summer, although he lost the election.

On August 10, Samatar spoke to nearly 300 people at Brooklyn Park Community Center about his recent visit to Somaliland, a self-proclaimed independent state, which has been struggling to gain recognition from the international community for the last two decades.

“I’ve seen peace, security and a trace of law and order everywhere I visited in Somaliland,” Samatar said, addressing his audience in Somali. “I’ve seen people paying tax willingly because they are satisfied with what the government is doing. There is sense of democracy. Freedom of expression. They understood that if you don’t let people speak from their mind, the government would fall.”

Earlier this summer, Samatar visited Somaliland for the first time in about 18 years. Even though he’s never held a public office in Somaliland and has opposed its separation from Somalia for many years, hundreds of thousands of spectators assembled on streets with photos of Samatar in an expression of profound love and respect for the international studies professor at Macalester College.

“No words can describe the reception I received,” he told the crowd, speaking behind a podium placed in between two flags — that of the United States’ and the green, white and red striped flag of Somaliland. “I can’t wait to go back.”

Samatar endorsed a separate Somaliland state, though he cited obstacles that will present tough challenges in that quest.

“The world’s attention is on Somalia right now,” Samatar said. He reminded the crowd, mostly Minnesota-Somalilanders, of the official recognition the United States granted last January to the Somalia government in Mogadishu.

He added that the world is busy in the reconstruction and development of Somalia, suggesting that no one is considering sovereign statehood for Somaliland at the moment.

In case option one — an independent Somaliland — doesn’t work out, he urged the people of Somaliland to have a second option: negotiation with Somalia.

When an audience member confronted his suggestion of having a Plan B, Samatar said, “You won’t go anywhere if you don’t have Plan B.” But he reassured the crowd: “I want Somaliland to win. I mean it.”

Before 1960, Somalia was in the hands of British, Italy, France and other colonial countries that divided the country into pieces. For instance, the southern part of Somalia, including Mogadishu, was colonized by Italy. Its northern part, now called Somaliland, was a British-occupied land.

Having shared a common struggle for independence, Somalia and Somaliland decided to join forces and become one strong Somali nation.

While many Somalis say it was a milestone that Somaliland joined Somalia, some people from Somaliland — not all of them — argue that the merger was a mistake. They say Somaliland hasn’t benefited from the 31-year-old marriage to Somalia.

For the past 50 years, Samatar said, there were only two clans that took turns to fill the presidency. The clans Samatar was referring to are Hawiye and Darod, two of the largest clans in Somalia.

For the Somalia government, on the contrary, Somaliland is just another region of Somalia.

Samatar’s presentation on Somaliland wasn’t all about praise — he also pointed out many low points that the autonomous Somaliland state can improve upon.

Somaliland isn’t that different than Somalia in terms of power sharing, Samatar said. Somaliland feels like a village with one man in power, he said, referring to the major clan, Isaq, which has held the presidency for many years. He called for diversity in the Somaliland leadership.

“The government should reflect on the people it services,” said Samatar.

He also urged the government to work on energy development. “You can’t run a country without electricity.”

Samatar also said that he met people, who don’t have access to clean water. He added that people go on foot four miles, fetching water.

Samatar’s assessment on the issues in Somaliland seemed more like those of an academic than a politician. After Samatar’s presentation, the audience was given a chance to comment and ask questions.

Asked if he would run for Somaliland presidency, Samatar said: “It’s not about me wanting or not wanting to become a president. It’s about the desire of the people. Is Somaliland asking someone who can change? Someone who can lead? I don’t see those questions asked. I see corruption. I see romanticization of clan, which I’m not into.”

“It was a fair discussion,” said Said Ahmed, who identifies himself as a Somalilander. “It was very informative.”

Aisha Hassan, who hasn’t been to Somaliland for the past 15 years said she’s glad that Samatar visited “my country” to see the realities there.

“The professor is a genuine man,” Hassan said. “He says it like he sees it. I respect his conclusion.”

The event was made possible by the Northwest Hennepin Human Services Council, Africa Institute for International Reporting, Horn Development Center and the City of Brooklyn Park.