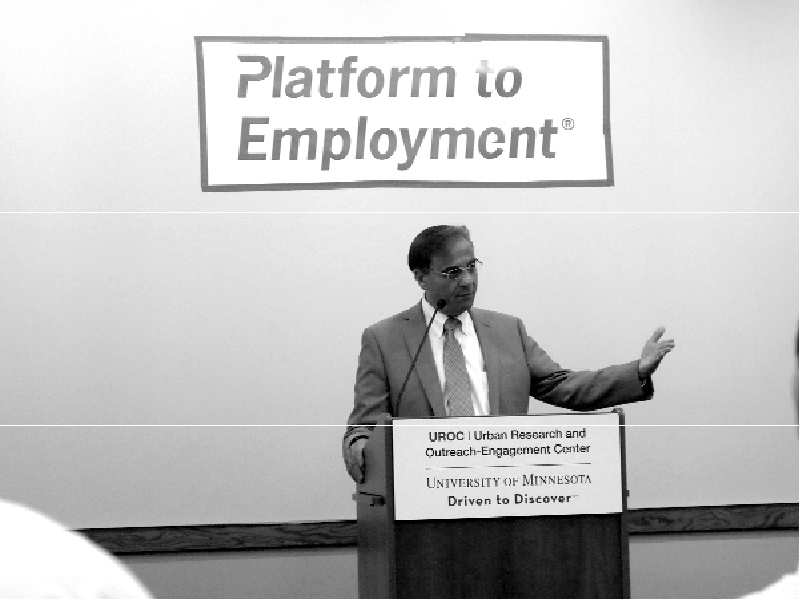 Joseph Carbone of The WorkPlace (Photo by Margo Ashmore)

“These days, to get a job, you have to have a job,” is a phrase I started hearing about two years ago, coincidentally, about the time the recession was “over.” The hiring community was and is suspicious of the long-term unemployed, especially those over age 50, especially when there are tech-savvy young people out there eager to work as well.

Platform to Employment (or P2E), which launched on Sept. 23 with 24 participants including people from Northeast and North Minneapolis, aims to give groups of workers their first eight weeks on jobs in subsidized opportunities risk-free to the employers. But first they have to get their minds right and their skills brushed up.

I’d have loved to work alongside Deloris Hamilton, an outgoing, engaging insurance verifier with a long work history in various jobs. “I’m used to working,” she said. Her uncomfortable edge comes out as she starts to admit her elderly mom paid the light bill for her last month, her savings are gone and she’s just this far away from going to the shelters, but qualified for only $16 in food support and no medical insurance.

Joseph Carbone, President and CEO of The WorkPlace, the company implementing the private-foundation-funded program, says “if we do not readily respond, they will end up in the safety net of public assistance programs that are already over-stressed.”

Long-term unemployed is defined as having had significant employment, but with unemployment benefits exhausted or about to run out. People who have already found part-time jobs not in their field, consultants, or who have started businesses are not eligible. An estimated 4.3 million Americans have been unemployed for 27 weeks or longer as of August 2013.

According to a news release, “The program is a proven model that demonstrates that the right job readiness programming, combined with personal and family support services and financial counseling, can return the long-term unemployed to the workforce. Tested in multiple cohorts, including participants from urban and suburban communities, P2E has placed 80 percent of program participants into work experience programs, with nearly 90 percent of these individuals moving on to full-time employment.”

Workers I talked to said they’d found out too late, the rules of the unemployment system, Joe Stokes, for example, living on severance thinking that unemployment would kick in at the end. It did, but only for three checks. Some have understanding and patient spouses, John Gasper’s brother and his wife moved in to share living expenses.

Femi Olowu had a business for many years, then went into banking for two years. Recently he went back to college to complete a degree in business and now has aggressively started to look for work again. He said he’s very confident.

NorthPoint Health and Wellness will be providing the platform for helping with emotional readiness, confidence for the job search and to be working again. City of Minneapolis Employment and Training job developers will be identifying real job openings for graduates; for the employer the incentive is they will get pre-screened applicants and be paid four weeks of wages and another four subsidized before needing to decide on hiring. Only after week 8 is the employee transferred to the company’s payroll.

Carbone said that in his program in Bridgeport, Connecticut, many employers did not take the wage subsidy because they were satisfied with the candidate at the time of the interview. Minneapolis is the sixth in the nation of cities replicating a Connecticut model, behind San Diego, Chicago, Cincinnati, Dallas and Connecticut (based in Bridgeport). The cost is about $6,000 per person.

So who’s paying for all this? Some of the funds come from Walmart, on behalf of veterans (who don’t need to be over 50). Funds come from the AARP Foundation, and Citi Community Development.

Congressman Keith Ellison addressed the launch luncheon Sept. 23, saying he sat on the financial services committee “so I know exactly what happened in 2007 and 2008, I’m glad to see they are giving some.”

Participants got down to work after lunch. Before and during lunch, representatives of businesses and foundations networked. Heard at our table: The foundation head of the Builders Association of the Twin Cities remarked that in the building industry, younger people with management skills found other fields when building projects dried up during the recent recession. That left people over 50 who’d known no other field, scrambling to start their own construction businesses to survive.

The first round of participants mostly responded to a news segment promoting the program on WCCO TV; there had been a 60 Minutes feature on Carbone’s program earlier.

Business participants received an email stating: “If you are interested in learning more about Platform to Employment: