Europe has come to understand that what is at stake right now is not just the economies of a few member nations, but the future of European Union itself.  The cornerstone of that union is the Euro, the single currency that has made close cooperation even tighter.  But in order to save that currency, there is little that can be done short of the member nations drawing much closer together.  That, and risk killing off the Euro in order to save it.

The growing realization is that they will have to print a lot more Euros to get out of this. 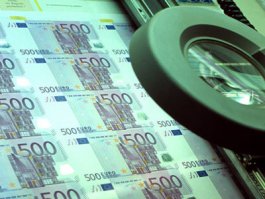 As discussed earlier, the European Central Bank (ECB)  does not really have the power to simply print money, which is more or less what our Federal Reserve did with two rounds of Quantitative Easing.  They were set up to make a single, strong currency that the world can rely on.  They did that well and are loathe to destroy the faith built up by simply printing cash to cover the pending default of sovereign (national) debt.

But once you accept that default is inevitable, there is little choice.  The problem comes in the reserves held by banks who were investing in the European economy.  Under the rules, leverage of up to 450:1 (!!) was allowed when the reserves were sovereign debt.  This was done because default on national debt was unthinkable – it simply could not happen.  So those assets were deemed completely secure.

Here in the USofA, we’ve been dealing with “Too big to fail” and, at times “Too big to understand”.  In Europe the entire system was set up on “Failure is impossible”.

The deal with Greece supposedly allows 50% of their debt to be defaulted on, although that does not include the debt with the ECB and other institutions, meaning it’s closer to 30% overall.  At least one independent analyst (Sean Egan) has said that he believes the default will have to be closer to 90% in the end.  The problem is that in order to cover debt payments you have to tax the people of Greece at a level that will almost certainly wreck the economy and plunge them into a Depression by any measure.  That makes covering the debt even harder, meaning more default.

As tempting as it is to make the banks pay for all of this, many do not have the reserves outside of sovereign debt to keep operating.  Asking banks to take the hit will almost certainly result in bank failures across the Eurozone.

As we all know, the problem is much bigger than Greece.  There is an estimated €3 Trillion in default looming out there right now, and that will have to be made up somehow in order to keep the Eurozone from falling into Depression.  If you estimate at least half of this can be raised by simply printing it, you’re looking at a situation very similar to the Quantitative Easing done by the Fed.

Why are they so slow to do this?  The ECB is chartered to prevent inflation and preserve the value of the Euro, and printing more of it would render the existing money supply of around €10 Trillion much less valuable.  However, inflation would spread the pain around very evenly through the whole system – essentially a tax on everyone for the benefits of maintaining one currency.

This has the additional benefit of lowering the value of the Euro around the world, making exports cheaper and likely providing jobs in the distressed economies.  But this could deepen the Currency War which is always on the verge of becoming more of a Trade War.

No matter what, the motto for the Euro is going to become “Print or Die”.  Exactly how much is an open question, as is how it will be authorized.  We do know that the result will have implications for international trade and will hurt our own efforts to boost manufacturing and create jobs here in the USofA.  But it is still much more desirable than chaos throughout Europe and a general Depression that could well bring the whole world under.