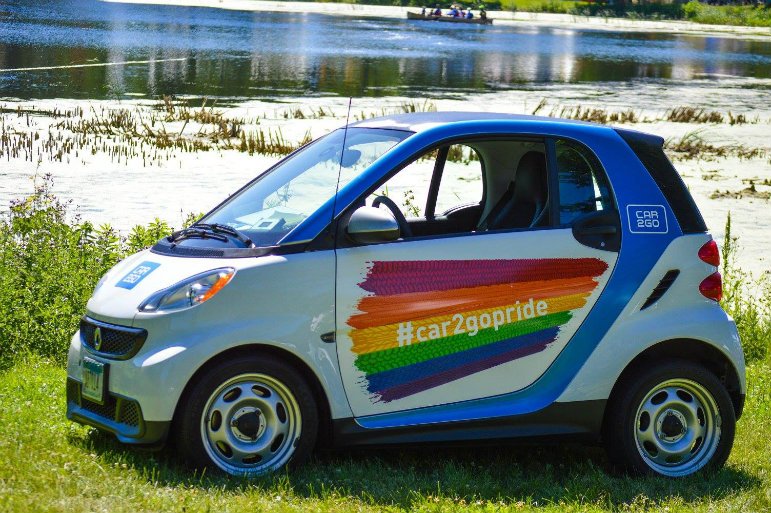 What does Car2Go have to do with queer liberation? Photo credit Nicole Kendricks via Twin Cities Pride's Facebook page.

When queer communities complain about the “corporatizing of Pride,” they often mean they don’t want to see businesses like Target and Car2Go having large displays at the festival and floats in the parade, when department stores and car sharing have nothing to do with queer pride or resilience within heteronormative patriarchy.

It’s a familiar narrative of the past couple of years. But ultimately, Target isn’t leaving Twin Cities Pride. The way the weekend is set up, Pride relies on sponsorships and big business pushing money through and making it all happen. The festival’s purpose is to have attendees invest in new products, services and ideas. There’s no getting around it. Want less Target? We would need an entirely new structure and purpose for the event to happen.

I will not be able to cover all the issues any queer person has ever had with Pride, but this year, I noticed something I’ve previously dutifully ignored: queers will spend a lot of money all of Pride weekend just because something has a rainbow on it.

I recognize we do not all love corporate presence at a celebration that was once a radical riot. But do we notice the manipulation? Forget Target. What about the Gay 90s and First Ave and and their $20 covers just to get in the door? What about $7 lemonades in Loring Park on the hottest day of the summer?

Queer communities face manipulation, and thus the accessibility of pride, self-love and revolution is being diminished.

There is an expectation for people from LGBTQIA communities to spend way more money than they do on a regular weekend. It’s the Hallmark Holiday of queer life. There is a compulsion to celebrate as much as possible all weekend, at whatever cost–literally.

I heard dozens of (white) queer Pride attendees hear the price of a drink, bar cover, t-shirt or bottle of water, and then shrug their shoulders and say “Oh well, it’s Pride!”

Being allowed entry into a bar shouldn’t cost $20 (when it normally costs $5 or less) just because it’s June 25. We are being exploited, and not many people seem to be too mad about it. It’s accepted and expected.

We have to remember our queer elders who fought hard for this weekend every year. Yeah yeah, Target. How about the bars and sanctuaries that supposedly make us feel welcome, just to triple or quadruple the charge on us the weekend we need it most? Where is the outrage?

Queer liberation should have nothing to do with the market.

This account probably sounds disenchanted with Pride in general. Here’s the thing. There are plenty of people who don’t want us queers to gather, and I’m not saying we shouldn’t. But we can be queer out loud without this commodity package of what it means to be queer.

Of course, not all Pride stuff is bad and manipulative. An example of a Pride-related event that rocks is Queertopia. This queer performing artists’ event is run by queer people at a venue that serves the community. The cabaret features mostly (if not entirely) queer artists. You attend the show and you don’t feel exploited. You feel like you’re a part of something. And, if you can’t foot the full price, there are sliding scale ticket options. It’s one of the last accessible Pride events in the Twin Cities. Plus, you know where the money is going: to Intermedia Arts and the pockets of the artists.

In general, however, establishments don’t really have our best interests at heart. If they did, wouldn’t they be working to make their community spaces more accessible? Lemonade should never be $7. Not every booth at Pride should be trusted, just because they coughed up a couple hundred bucks to set up a table and hand out some stickers.

I wonder about how easy it is for us to believe businesses support us, especially if they are run by white, cisgender, heterosexual people. I wonder how low this bar is. It’s not really radical to support gay marriage anymore. It’s legal, for one, and it’s not really a risk for anyone to say #LoveIsLove. What assets is Target risking when they use that hashtag? Truly nothing. The only thing they can do is gain our business.

This is why I’m skeptical. When the National Guard has a booth at Pride, and they were the ones who quelled the queer protests of the 1960s and 1970s, does this mean they’ve come around? That we’ve forgiven their violence? That everything’s okay again?

I am concerned that we are too easily impressed. Queer and trans people, especially queer and trans people of color, are still being killed. The Orlando shooting was just one of many killings of queer people. Queer people get killed and kill themselves far too often. I have said this before and I will say it forever: there is no such thing as liberation foundation until not a single queer and/or trans person dies, by their hands or someone else’s, because of their identity. I don’t think that’s asking too much.

I just worry about how a sacred weekend has turned into exploitation in the name of something for which our queer elders actively struggled.

Know that people with more resources than us have consciously thought this through. The inaccessibility of celebration and the mining of our own resources at Pride was organized against us.