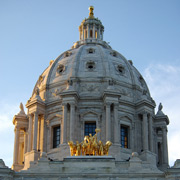 Despite all of the right wing groups’ handwringing about tax increases under Governor Dayton’s budget proposal, Minnesota’s “price of government” under the Dayton plan will actually be less over the next four years than during the previous four.

The “price of government” (or POG) measures total Minnesota state and local government taxes, fees, and charges as a percentage of statewide personal income. According to the most recent POG report from Minnesota Management & Budget (MMB):

In broad terms, the “Price of Government” is a measure of the cost of all general government services statewide. It answers the question: How much do Minnesotans pay to state and local governments in total? It is comprehensive and includes nearly all revenues generated by state and local units of government as well as public school districts. All state taxes, property taxes, special assessments, fees and charges are included. Federal taxes are not included. The measure serves as a financial index for the cost of public services in Minnesota.

The POG was the brainchild of the Minnesota Chamber of Commerce; in the early 1990s, the Chamber successfully lobbied for “price of government” legislation that would require MMB to periodically calculate and publish the POG percentage. The Coalition of Minnesota Businesses (COMB) has described the POG as “an index of what taxpayers can afford.”

The POG concept has not only been embraced by conservative groups such as the Minnesota Chamber and COMB, but by progressive groups such as Growth & Justice, the Joint Religious Legislative Coalition, and Minnesota 2020. The logic behind POG is sound: the size of state and local government should be measured relative to statewide personal income, not only because personal income is a measure of the statewide ability to pay taxes, but also because growth in personal income is indicative of growth in economic activity, which typically increases the demand for public investment in transportation, education, and other types of public infrastructure and services. MMB, the Minnesota Department of Revenue, the U.S. Census Bureau, and even the conservative Tax Foundation typically measure tax revenue as a percentage of personal income.

MMB has calculated the POG for every year going back to fiscal year (FY) 1991.* The November budget forecast contains projections of the POG through FY 2017. This data provides a long-term track record of the past, current, and projected future size of government in Minnesota.

Minnesota’s POG during this entire 27 year span is shown below. The dotted line that commences in FY 2014 shows what the POG would be under Governor Dayton’s proposed budget. All amounts are calculated by MMB. 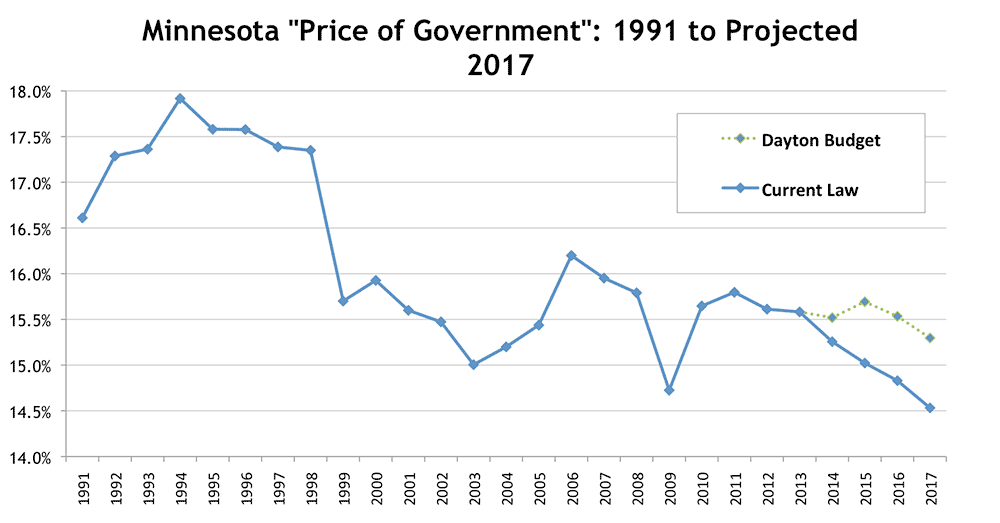 Under current law, Minnesota’s POG is expected to take a sharp nose dive over the next four years, dropping below even the Great Recession low point in 2009 to a new historic low of 14.5 percent by 2017. Given the decline in funding for K-12 education, higher education, and infrastructure over the last decade, we can not allow public resources to plummet at this pace. By increasing state tax revenue, the Dayton budget prevents the current law POG plunge and allows the state to restore funding for critical public investments and balance the state’s budget responsibly without shifts or gimmicks.

Minnesota’s POG falls because the tax increases proposed under the Dayton budget are less than the projected growth in statewide personal income. Thus, the Dayton budget is clearly not increasing taxes beyond the ability of the Minnesota economy to bear, based on the best projections of personal income growth currently available. This is something to keep in mind the next time you hear anti-tax legislators complain that the sky is falling.

*The POG report from MMB groups fiscal year revenue data for the state and school districts with calendar year data for non-school local governments. Thus, the first year of data under the POG report is actually a combination of calendar year 1990 data and fiscal year 1991 data. For ease of presentation, this article will reference the year of the POG data by the fiscal year date.