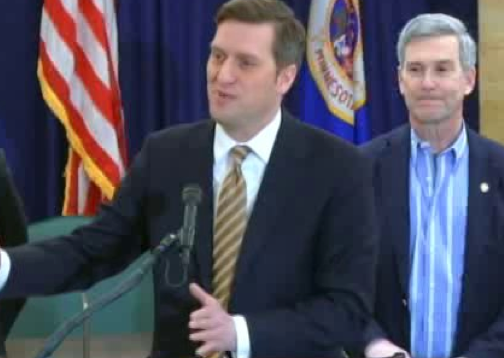 “Part of this economic confidence is there is balance restored in state government,” Daudt told reporters.

Pioneer Press reporter Rachel Stassen-Berger almost immediately pressed Daudt if he “could reiterate that theory… the theory that this forecast is good because Republicans now have the House and there is balance restored to the Capitol? Tell me more about that.”

Daudt said the increase in this latest forecast is mostly because gas prices are low “But I think Minnesota’s economy also understands that we don’t have a runaway government that when we didn’t need to raise any taxes put in place one of the largest increases in state history.”

Governor Mark Dayton with Democratic majority in both the House and Senate raised the taxes on the top 2 percent of earners in Minnesota. Dayton was re-elected by a large majority.

“I think that people have confidence in that balance has been restored in state government,” said Daudt.

More reporter questions and video of the exchange

Another reporter asks if Republicans are claiming credit for the portion of the surplus that happened after they took office. Daudt appears to walk back his comments and says he’s not responsible for the surplus “Minnesotans deserve the credit.”

Click here for more on the budget surplus and all of the news conference video about it.