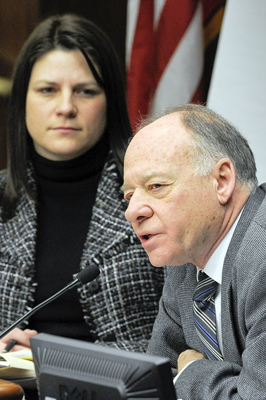 Repealing a 17-year ban on constructing nuclear power plants blew through its first House committee faster than wind blows across a prairie dotted with turbines.

Largely along party lines, the House Environment, Energy and Natural Resources Policy and Finance Committee approved lifting the moratorium Jan. 11 on a 10-6 roll call vote. Rep. David Dill (DFL-Crane Lake) was the lone DFLer to vote in favor of the repeal.

Sponsored by Rep. Joyce Peppin (R-Rogers) and Senate Majority Leader Amy Koch (R-Buffalo), HF9/ SF4 would allow the Public Utilities Commission to issue a certificate of need for the construction or expansion of a nuclear power reactor if an applicant comes forward.

“If we fail to plan and provide the infrastructure we need in the future, we risk not being able to provide the energy needs we’ve become accustomed to, like lights and warm homes,” Peppin said. “Renewables alone will not get us where we need to be.”

The debate is more than a philosophical difference between baseload power and renewable energy sources.

“This is not symbolic. This is trying to do what’s right for Minnesota. We want to have that discussion,” said Committee Chairman Denny McNamara (R-Hastings) during the 90 minutes of testimony.

No one claims to be waiting in the wings with an application in hand. Rather, advocates say lifting the moratorium would allow utilities to explore all their options to meet energy demands that are projected to outgrow production capabilities by the year 2030.

“The only way you really have those conversations is if a company is interested in building a reactor in Minnesota,” said Marshall Cohen, senior director of state and local government affairs for the Nuclear Energy Institute. “No company will waste its time or effort to discuss a new reactor when there is a law prohibiting construction.”

That’s OK with opponents, who say lifting the ban could lead to ratepayers being charged for the multi-billion dollar cost of planning and constructing a facility – if it’s built at all.

“Lifting the moratorium on nuclear power in Minnesota would saddle ratepayers with unnecessary risk for one of the most expensive sources of energy,” said Rep. Kate Knuth (DFL-New Brighton).

If the PUC were allowed to issue a certificate of need, the regulatory process could begin and would likely take years to complete. There would be a cost analysis and hearings; and if a case were contested it would be heard by an administrative law judge, according to Brad Eknes, a PUC state planner.

From there, a certificate of need could be approved, modified or denied. If approved or modified, the next step would be to acquire a site permit which would involve an environmental impact analysis.

Since there haven’t been any nuclear plants built for decades in the United States, legislators are looking at the projected cost of two reactors under construction in Georgia. The federal government granted an $8.3 billion loan guarantee to help build the twin reactors, and the overall cost is projected to be $14 billion.

Rep. Jean Wagenius (DFL-Mpls) said the cost of nuclear power produced by Constellation Energy Nuclear Group on the east coast was so expensive that no one would buy the electricity.

The price tag is not the only argument used by nuclear power opponents. Fear of a plant incident resulting in the release of radioactive materials and the on-site storage of nuclear waste concern those living closest to existing nuclear power plants in Monticello and at Prairie Island near Red Wing.

When the plant was built in the 1970’s, storage of nuclear waste was meant to be temporary until a deep geological repository for spent nuclear fuel opened under Yucca Mountain in Nevada. “It has become painfully clear that Yucca Mountain will never open,” Winfrey said.

Red Wing City Councilman Dan Bender said the lack of a federal repository is precisely why nuclear power construction has stalled in the U.S. and he blames the federal government for abandoning the Yucca Mountain site. Speaking on behalf of the city council, Bender said the Legislature should direct the state attorney general to sue the federal government to open the Nevada repository. He said the council supports the proposed legislation because the Prairie Island plant has provided high-paying jobs in Red Wing.

Contractors and trade unions are hopeful that lifting the moratorium will result in more of those high-paying jobs.

More than 50,000 workers from the Minnesota Building and Construction Trades Council are out of work, said Harry Melander, council president. Although nuclear construction jobs may not materialize for 10 to 15 years, it’s “still a ray of hope for those individuals where there’s no hope at all,” Melander said.

There are 104 power plants operating at 90 percent capacity, according to Cohen. “They are tremendous baseload electricity.”

Nuclear power is viewed as a constant source of electricity; whereas energy derived from wind is not. Still, those philosophical differences exist.

“We have, over the past several years now, worked very hard to develop a reputation in Minnesota as the place where renewable energy is promoted and embraced,” said Rep. Bill Hilty (DFL-Finlayson). Renewable energy also creates jobs, he said. He views nuclear energy as a detriment to attracting new businesses to the state.

The bill’s next stop is in the House Commerce and Regulatory Reform Committee, which has not yet scheduled a hearing. Should it make it to the House and Senate floors, a Republican majority would be expected to pass the bill. The question then becomes whether the legislation would be signed by Gov. Mark Dayton, who, during the gubernatorial campaign, said he opposes lifting the moratorium.

McNamara said the bill is not meant to be a “shot across the bow.”

“We need to work together with the administration and move this thing forward and move jobs forward,” he said.