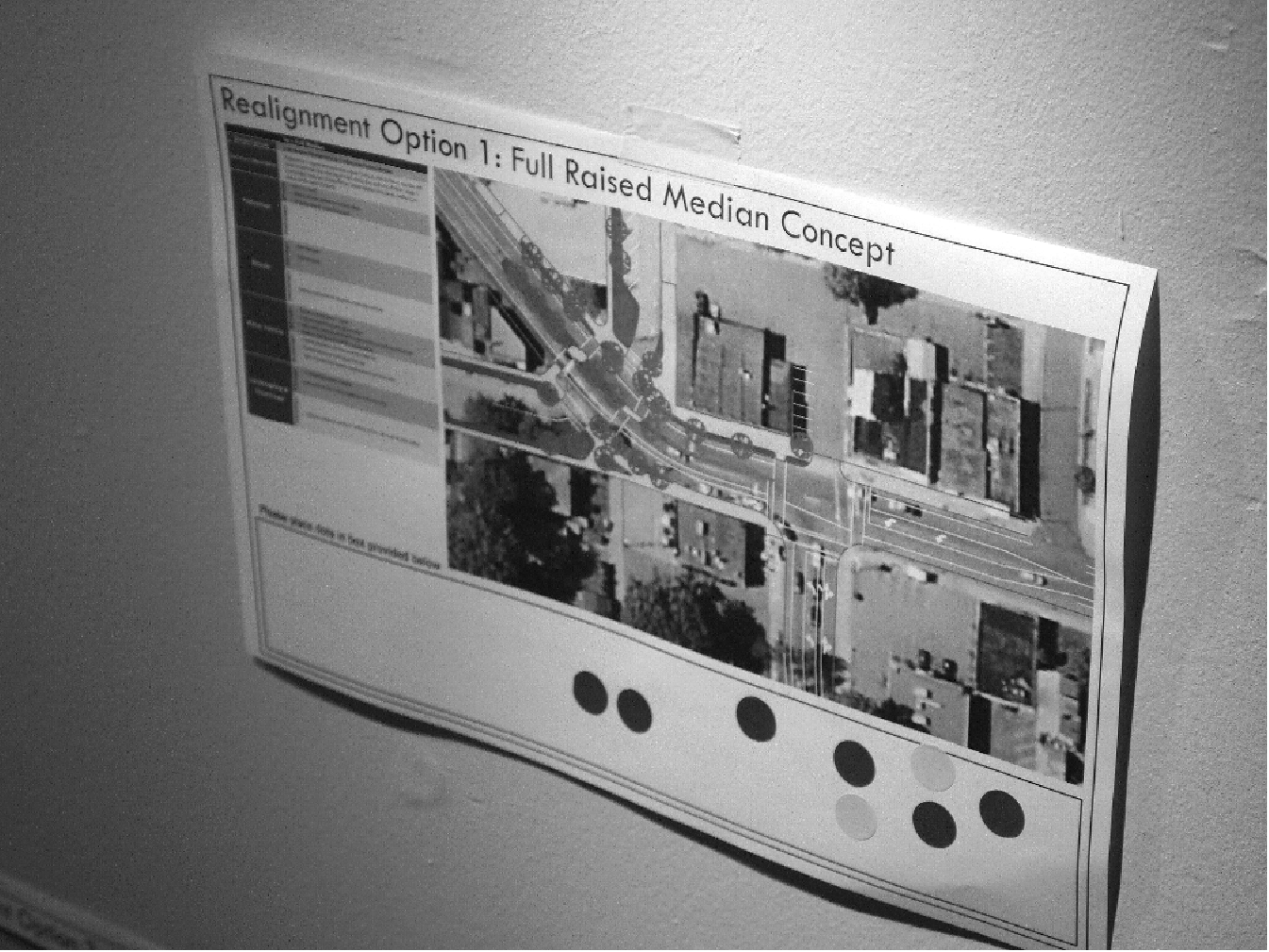 A lot of life is spent getting ready to get ready, or planning to plan. When you’re dealing in other people’s money and public opinion, that’s how it has to go. Here’s what’s happening on two fronts:

At the double intersection that is Penn, Osseo Road and 44th, near Victory 44 and The Warren: An Artist Habitat where an all chairs filled meeting was held Oct. 15, “cars fly through” especially from the higher-speed Osseo Road, and pedestrians hop like bunnies looking in all directions to avoid them.

Bike Walk Twin Cities got a grant to help a total of 12 projects get to the stage where they can get in line for funds to refine and implement designs. Consultant Michael Moule explained that at the end of this process the intersection revision would be 30 percent designed, the threshold for making applications. He explained that they don’t even guess at comparative project costs at the beginning, since refined engineering and market conditions at the time of bidding can change those costs significantly.

Also, grants can be found to meet various goals like storm water management, which might make a seemingly more expensive solution come out less expensive than a more conservative approach.

Bikers are interested in the intersection because the Grand Rounds regional bike connection, Victory Memorial Parkway, is nearby.

After explaining several options, including one that a Victory neighborhood group worked on several years ago, those attending voted with dots. While there will be other discussion opportunities, this first pass favored the following features:

Called the “full raised median” plan, similar to the neighborhood’s plan from 2009, it would eliminate the first signal that cars now encounter coming into the intersection from the north along Osseo Road. Some turning options, such as westbound on 44th, would be eliminated as a median would guide traffic toward the intersection that would remain, 44th and Penn. Penn, now a one-way north of 44th, would remain so, and be striped for angle parking. Trees would be added and pedestrian crossing areas made obvious. There were 34 votes cast for this option, 14 for the next most popular.

That next most popular option, the “revised multiple signal concept” the neighborhood had developed, involves making the last block of Penn (north of 44th) a two-way only accessible from the north, cul-de-sac’d at 44th.

Moule used the term “road diet” to describe making traffic move more smoothly and with fewer accidents by decreasing the number of available lanes. Adding trees, sidewalks, bike lanes and features that promote pedestrian safety also reduce speeds and wait times while letting the same number of cars pass. “Feds say road diets are among the top five ‘do this’ things,” he said.

Some residents agreed. One who lives on Osseo Road said, “There’s no sidewalks because we’re already too close” to the fast-moving street. “Buses and semis run on the seam [between road and shoulder] and our houses shake. So start it [lane reduction] way back at 49th.”

How quickly could this get done? Council Member Barb Johnson said assembling the funding could take five years, and Moule said it could be built in one construction season. In conversation afterward, someone mentioned that while developing the Victory plan, there had been talk of putting in temporary traffic control measures to see how drivers could adjust.

Oct. 16, the City of Minneapolis held an open house at Folwell Park to get input on changing some of the north-south streets to be more bike-friendly and possibly link the larger parks. The choices were a full greenway, a half-and-half (both of which would involve major changes), or an option of no infrastructure changes but striping and lane changes to designate routes for biking sharing the roads with cars. 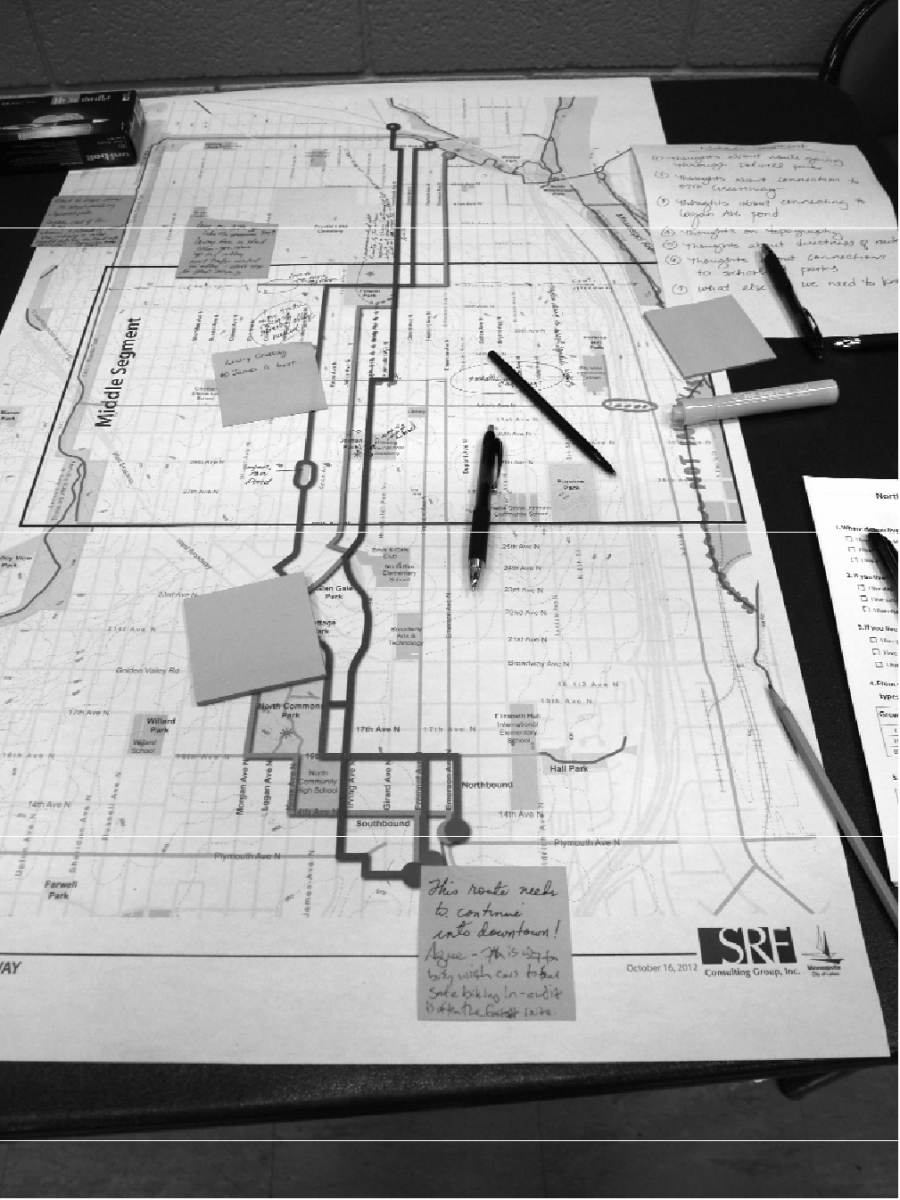 At right, options for north-south bike routes through North. The easternmost street is Emerson, the westernmost is Logan. See the map more clearly online, linked through MyNorthNews.com.

City staff and consultants from SRF split the north-south map into northern, middle, and southern segments of the three route options for ease in recording public comments. “The feedback mixed,” said Sarah Stewart, Healthy Living Minneapolis Project Specialist. She told NorthNews, “Many attendees didn’t indicate a preference between routes, and some indicated preferences for combining different segments of the proposed routes. Some indicated that they preferred Route A because of its directness; others preferred Routes B or C because they provide more access to parks and are more recreational in nature.”

The survey is open on line through Oct. 30 at www.surveymonkey.com/s/NMpls Greenway.

Overheard at a conversation table, “They don’t plow the streets, they’re sure not going to plow the bike lanes.” Staff at the meeting said various discussions had taken place between residents, and those skeptical of the attention paid to bikes seemed to leave with more to think about.

Stewart said, “Through our community engagement efforts, including the open house, the online surveys, and various other events that I have attended (a community barbecue for Minneapolis Public Schools, the Lowry Open Streets event, JACC annual meeting and housing subcommittee meeting), I have heard a small number of people who are concerned that we are building something specifically for bicyclists. This small group of people has the perception that very few people are bicyclists. Some people do change their mind after hearing more about the project; some do not.”

The Hennepin County’s SHAPE survey— linked through www.MyNorthNews.com— shows 18.3 percent of North Minneapolis adults report biking to a destination at least one day a week when the weather allows. Stewart said a big plus for separate biking “facilities” is potential riders feel more safe and comfortable, therefore are more likely to ride. And drivers appreciate having fewer bikers on the remaining streets.

Stewart said a greenway, if designed well, will also be a nice space for other forms of non-motorized transportation and recreation, including walkers and joggers. A linear park greenway would also allow green space for things like community gardens and barbecues. A greenway could provide better safety for youth and seniors getting to parks, schools, and recreation centers.

Through surveys taken at the open house and online, about 500 people had registered their preferences or made comments as of Oct. 25. Most who attended the open house said they live within four blocks of a proposed route (54.1 percent) or directly on a route (29.4 percent). Online, about half the respondents live on or near a proposed greenway.

If the proof is in the use, the survey also asked how likely respondents were to use each of the design options, from “not at all likely” to “completely likely”. Stewart said both the online survey participants and the open house participants reported being most likely to use the linear park greenway type, followed in popularity by the “half and half.” Both online and in-person respondents were much less likely (only about a quarter) to use a bike boulevard.

Fourth Ward Council Member Barb Johnson commented that the people whose homes were affected by the new 37th Avenue Greenway all received personal visits to discuss how they would access their properties, where parking would be allowed, etc. She said the only thing she’s heard since the work was completed was that people drove on the pavement even though the signs said not to.

This project is funded by the City of Minneapolis through its Statewide Health Improvement Program grant from the Minnesota Department of Health, there was a $50,000 grant to conduct the public comment process. “The preferred route will be selected based on community preferences and based upon some additional analysis of traffic impacts, utility impacts, storm water impacts, etc.,” Stewart said. “The North Minneapolis Greenway Steering Committee (a group consisting of north Minneapolis residents and technical experts from the City, Hennepin County, and other agencies) will review the results of the community engagement efforts and the additional analyses and will recommend a preferred route. This preferred route will be used in the greenway planning efforts, with the acknowledgement that the route may change as we learn more and continue our community engagement efforts.”

It’s not known how long it may take to put funding together or how to estimate what the North-South route would require. The 37th Avenue Greenway cost $2.6 million, mostly for flood control. There were water quality improvements for Crystal Lake as well. Two grants paid for part, one was from the state’s Clean Water Fund for $1.4 million and the other was from the Shingle Creek Watershed Organization, according to Matt Lindstrom in the City of Minneapolis Communications Department.