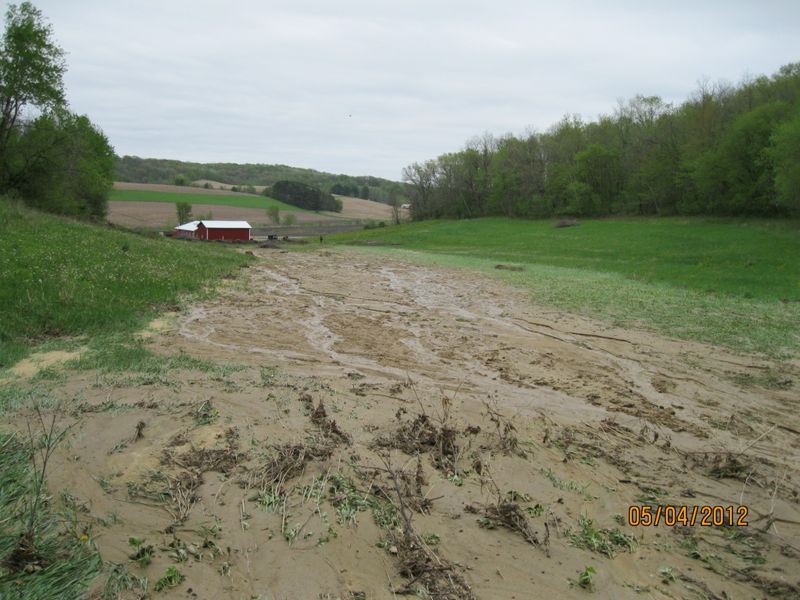 The chief refrain repeated by the sorrowful violins of the lobbyists for Minnesota’s sand mining industry and its allies is that if the state legislator puts additional safeguards in place for our water and communities, the industry will fail to thrive in Minnesota as it has in Wisconsin.

We’ll miss out on the new energy revolution.

A story broadcast Monday by Wisconsin Public Radio about a Preferred Sands mine in Trempealeau County near Blair suggests that there may be worse fates than starting the revolution without us–or dead trout.

.. . Last May, however, a heavy rainstorm liquefied one of the site’s waste piles, sending it crashing through an Amish home. DNR Enforcement Specialist Deb Dix says their suggestions were ignored.

“With this particular instance it was apparent that there were no best management practices around this sand pile to attempt to hold it back if rain was to occur.”

Dix says the DNR referred Preferred Sands to the Department of Justice for prosecution. Even then, she says the company continued to allow runoff to leave the property. Trempealeau County conservationist Kevin Lien says frac sand companies can afford to ignore the rules.

“So, we’ve learned that citations are pretty much ineffective for this industry. This industry has very deep pockets and a wealth of resources.”

“At this point in time we’re again having some runoff issues due to open areas [and] unvegetated open soils, where the soils are being carried offsite from the frequent rains and the snowmelt.”

Preferred Sands didn’t agree to an interview for this story. They emailed a statement saying they’ve resolved some of the issues, but remaining problems are exacerbated by the spring thaw.

On Preferred Sands of Minnesota’s web page on the Pennsylvania-based company’s site, there’s no mention of the Trempealeau County mine, only one in Bloomer and Chippewa County. It’s the same company, though. Here’s the page for the Blair location, Preferred Sands of Wisconsin, which touts a “state of the art” facility.

Here’s what people who visit Preferred Sands of Minnesota’s web page read (and it’s easy to understand why the less-than-curious members of the Minnesota Legislature might think that everything is totally copaceptic in this industry). Pay no attention Trempealeau County–and for pete’s sake, don’t worry about Southeast Minnesota’s water or trout:

Preferred Sands of Minnesota is dedicated to maintaining and sustaining, and when it comes to that, we’ll let our employees do the speaking for us:

“…Sand saved my farm. Excavating the sand deposits on my farm has allowed me to keep my land and home. I’ve been able to buy back the dairy cows I once had to sell off, who again graze on the hills that have been restored because of environmentally sound mine reclamation projects. When you choose to support the local sand industry, you are supporting the economic future of Western Wisconsin.” — Sam LaGesse

With locations in Woodbury, MN, and Bloomer, WI, Preferred Sands of Minnesota provides the much sought-after Jordan and Northern white frac sand. Our Woodbury and Bloomer facilities have in excess of 40 million tons of high quality Northern White silica sand, and have the capacity to produce approximately 500,000 tons annually of our natural sand.

Our white sand deposits are strategically located near major forms of rail transportation: Union Pacific, Burlington Northern Santa Fe Railroad, Canadian National, and Canadian Pacific. Preferred Sands of Minnesota is unit train accessible and has convenient barge access along the Mississippi River, providing service to the Southern Mississippi and into Ohio and Pennsylvania.

Preferred Sands of Minnesota is teamed up with the town of Cooks Valley and the town of Auburn to fund local recycling programs and we are actively involved in a 5-year Chippewa County, WI DNR ground water modeling program implemented to track any potential environmental impacts and gather data to advance best practices for mining and production.

Meanwhile, WPR reports in Trout Fishing Enthusiasts Begin Weighing Impact Of Frac Sand Mining that people in Wisconsin are indeed worried about their trout streams. Unfortunately, the Wisconsin legislature is sticking its head (and who knows what else) in the sand:

The Wisconsin Chapter of Trout Unlimited has not made any official statements on frac sand mining but has worked behind the scenes. Duke Welter, who represents Trout Unlimited in Wisconsin and the Midwest, says they are participating in a Chippewa County study on sand mining’s effects on groundwater and trout stream levels.

He says they have also suggested a state run study of the industry’s environmental impacts.

“So far I haven’t heard [a] positive response from most of the legislators that I’ve talked to because they think that existing tools are just fine, or they think it’s not important enough to try and put that effort together.”

No wonder Preferred Sands of Minnesota’s webpage is talking about Chippewa County and not that other place. (In Wisconsin, Senator Vinehout is an exception with regard to the sand mining industry).

Photo: Sandslide in Trempealeau County. Credit: Wisconsin DNR (top); Preferred Sands of Minnesota’s webpage. There’s a lot more text there than for the new operation in Blair, where run-off continues to be an issue.