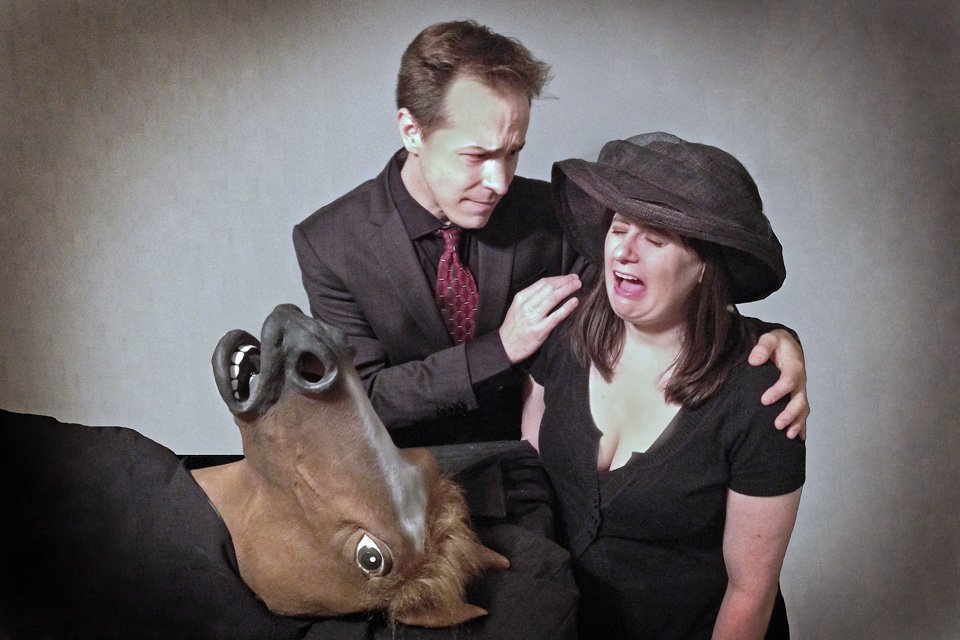 CAVEAT: I have worked with both Adam (writer) and Bethany (director) on a handful of smaller projects in previous years, and Cody (actor) is directing one of my sketches for a show in this Fringe, as well.

Box Wine Theatre was founded in 2008 by then-dating couple, now-engaged Adam Sharp and Bethany Simmons. The company was started with a mission to bring high quality theatrical productions to the stage on a low budget. Our goal is to bring a meaningful experience to our audience while sparking new ideas and encouraging the questioning of mainstream social norms and opinions. Box Wine Theatre holds the belief that human nature is beautiful in its’ flaws and we celebrate those flaws by producing stylistically or thematically unique shows which represent the comedy and tragedy that exists in all of us.

“‘Miniature Horses Don’t Go to Heaven’ and Other Plays Inspired by Real News Headlines” is written by Adam Sharp and directed by Bethany Simmons. It is made up of six dark comedies inspired by the actual news headlines:

Seriously we didn’t make any of these up!

Adam Sharp devised this play after stumbling across the headline which inspired the title scene with the reaction “This is hilarious! This must be fake!” Upon further investigation, Sharp realized that the seemingly twisted and comedic headline was real. And he felt bad… for about three seconds. Once the guilt was over he said to himself, “I can make an entire show out of this!”

If the tragedy and misfortune of others brings a devious smile to your face, you won’t be able to help but get a kick out of this show. If your humor lies with the dark and/or twisted things in life, you should come breathe the same air as others who feel the same way!

The tears of a child
Taste sweet on these lips of mine
Oh, schadenfreude