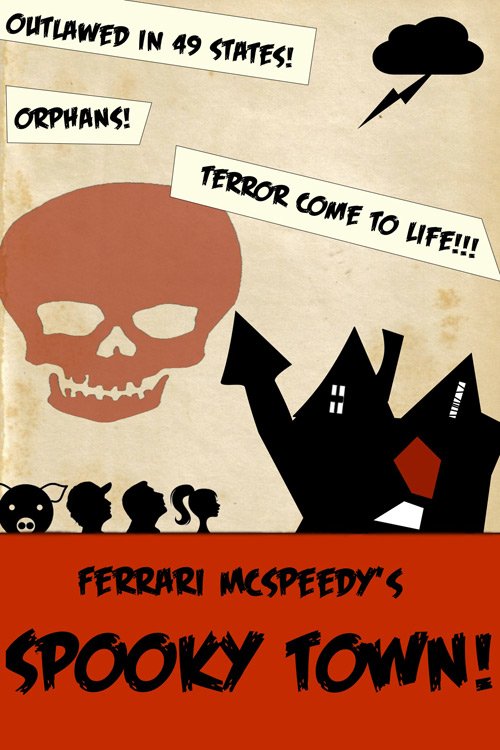 CAVEAT: Mike Fotis (one of the writer/performers) is a founding member of the Rockstar Storytellers, and we have worked together on a handful of spoken-word events through the years.

SHOW TITLE: Spooky Town
PRODUCER: Ferrari McSpeedy
HAILING FROM: Minnesota
SHOW DESCRIPTION: Four adults return to the orphanage that scarred them for a chance at 1 million dollars. Little do they know, the money will be splattered in their blood!!!!!!!!!!

We don’t have enough time to dive as deeply as we should into the world of the amygdala, so I’ll just let you know that the amygdala is important. REALLY IMPORTANT. As for the show, it was written and produced by Ferrari McSpeedy. We’ve been around as long as the sand. We specialize in the genre of comedy and our shows reflect this specialization. Spooky Town is our first attempt at Horror, which breaks down into beats that are very similar to comedy. So that’s good, I guess.

Our show deals with 4 former orphans who return to their orphanage on the promise that if they survive the evening, they’ll each get 1 million dollars. It’s basically the plot structure of House on Haunted Hill. Our homage, if you will. From there, things break down in hilarious ways. It’s a straight up comedy horror play.

Adults returning to childhood trauma? Wait a minute…this is Stephen King’s “It”, isn’t it? Are there clowns and/or spiders involved?

I am not giving anything away, except to say that the show features many traumatic triggers.

Bats? Heights? It’s a toss up between those two. I suppose my greatest fear would be encountering a bat on the edge of the Grand Canyon.

There once was a group that faced their fears
Even though they hadn’t seen each other in years.
They were all afraid of death
yet not addicted to meth.
At their gravesites were nothing but tears.