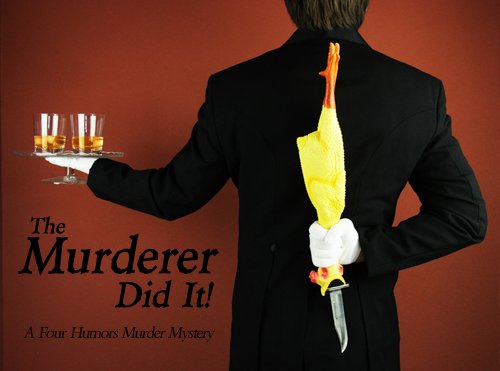 SHOW TITLE: The Murderer Did It!
PRODUCER: Four Humors
HAILING FROM: Minnesota
SHOW DESCRIPTION: Seven strangers. A remote location. A web of lies. Unexplained deaths. Everyone is a suspect, but in the end you’ll be shocked to find… it was the murderer all along! An original murder mystery from the creators of last year’s Harold.

What makes you such an expert on the amygdala, anyway? (Tell us about yourself!)

Four Humors prides itself on being to tell stories in a way that connects with our audience. Part of that is deciding what you want the audience to feel based on what the story is and how it is told. That usually requires us to delve into how to get people to feel what we want, since just telling an audience “This is really, really serious/funny/scary” doesn’t work.

Last year, when the Twin Cities Horror Festival started, we did an original hour long horror show called Harold. When we were working on the piece, we saw a lot of the similarities between comedy and horror. Deciding what the audience doest/doesn’t know in the story is how you surprise them. Depending on what the surprise is, you can make people laugh or scream.

In The Murderer Did It, there will be laughs and screams aplenty.

The Murderer Did It is inspired by the British Parlor Mystery genre made famous by Agatha Christie. So we have seven archetype strangers in a remote location, and characters start being murdered one by one. Where it gets scary is when you start to realize just how little two people meeting for the first time actually know about each other. People are rarely just what they claim to be and everyone has secrets, but when one of those secrets could be the desire and ability to kill everyone in the room, you have to really ask yourself how well you know someone. Accusations fly, and even people who are innocent can be dangerous if they feel backed into a corner.

Seven strangers? A remote location? Everyone is a suspect? Sounds like you’re exploiting the Agathie Christie formula. I hate Agatha Christie mysteries, because they presuppose that everyone is equally capable of every act. Now justify the moral position I’ve imposed upon you.

Well, it’s obvious you’ve been hurt by Agatha Christie in the past. Haven’t we all? Originally our plan was to just do an Agatha Christie play (The Mouse Trap, And Then There Were None, etc.) but as I read through some of the old plays, I started to have questions beyond “Whodunnit?” I started to wonder, “Why aren’t these people trying harder to get out of this death trap?”, “Why are they all so calm when there are three dead bodies in the parlor?”, and “Why do they think it is their job to solve the mystery?”

These questions became the seeds for making a new show where we’d tryt o find out what kind of people would behave like this in an emergency.

Is every character equally capable of every act? That’s up to the audience to decide based on the evidence they observe. Besides being entertained, we hope that you’ll enjoy the challenge of untangling the mysteyr along with our poor, trapped detectives.

That my friends and family will die and I will be left alone. And drowning.

There once were 7 Brits
who tried to escape the pits
But stabbed, shot, or fried
one by one they died
for there was a Murderer in their midst