How good are things getting? It depends a lot on where you are in the economy. At the top end life is definitely improving – but at the bottom end it’s just endless misery. That’s the only conclusion that can be reached after two reports released this week.

The first was an analysis by the Associated Press that showed that underemployment is much worse for those at the low end of the economic scale, which in technical terms is hardly surprising. But what they found is that 20% of those at jobs worth $20k per year don’t have enough hours, versus 7.2% of those who would normally qualify for jobs over $150k. The second piece release was by the Census Bureau showing that 15% of Americans, 46.5M people, are stuck in poverty as they have been for 4 years.

While Barataria has cheered on the progress made recently, it always has to be seen by comparison to how bad things have been for a solid 5 years since the official recession started. Given our prediction that there is 4 years left to go in this restructuring phase of a longer wave, it’s hardly much to be happy about. But it gets worse when you look at how stubborn poverty has become.

The analysis by AP was especially interesting in this light. The jobs that are being created so far have been those for more skilled workers, leaving much of the population behind. The report takes off from the much more reasonable U6 definition of unemployment, currently at 13.6% overall. This is the measure that includes those who have given up looking for work and those who are stuck with fewer than 40 hours a week (not by choice). The AP found that this effects far more people at the low end than the upper end of the pay scale.

This is hardly surprising given that we lost 1/3 of our manufacturing jobs, or about 8M, between 2001-2010 – and these have not been coming back.

That’s where the annual poverty report comes in, and in more or less confirms how bad it is for those who are struggling. It hasn’t budged in 4 solid years, as show in this graph: 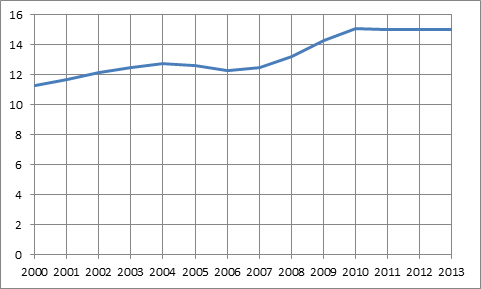 Note that the US does hit a peak of around 15% poverty with every recession, but this one is notable for how stubbornly high the poverty rate has been. Note also that it was creeping up through 2004, again showing how things have been bad for a decade for many Americans. The net increase in the number of poor has been about 1/3 over the last 13 years, a chilling number given how stable it has been recently. The problem seems intractable in the economy we have now.

There are a lot of reasons for this, notably the constant downward pressure on wages that comes from more people chasing fewer jobs – especially the less skilled jobs. As noted before, income inequality has been growing in the US since 1968, except for a very brief pause in the 1990s. This is a long term phenomenon that won’t reverse until there are fewer people in the labor market – and more in the retirement home to support at the same time. The oldest Baby Boomer is now 67 and serious about retiring, and the median age ones hit 65 in 2018, so there is hope if we can find a way to manage our elderly properly.

But today, the problems of underemployment and poverty have become what looks like a permanent feature of better than 1 person in 7 living in America today. It’s a very nasty problem that is not going to go away any time soon.

As things get better for the very wealthy and even quite a few people in the middle class, it’s important to remember that this economy is still leaving many people behind. Whether you are looking for increased opportunity for all or concerned for the quality of our safety net for the most vulnerable this news is nothing but bad. And given how structural the problem is we can expect it will be with us for a number of years yet to come.

Hopefully our predictions are correct for the very long run and this can’t last forever. But for those stuck with very low wages it’s understandable if you are less than encouraged by the news these days.