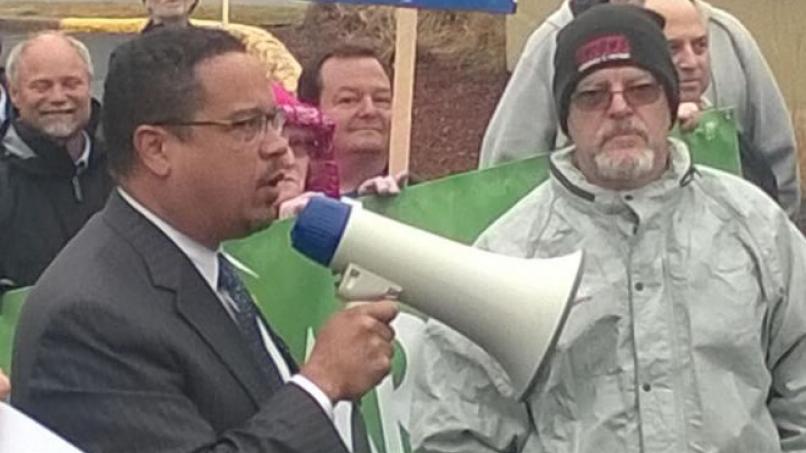 Congressman Keith Ellison was among the many people who voiced support for a strong Postal Service at Thursday's rally in Roseville. (Photo by Joey Getty)

A Postal Service decision to open postal counters in Staples stores will compromise service to customers and jeopardize the security of the mail, employees and community members said at rallies held nationwide Thursday.

The demonstrations, organized by the American Postal Workers Union, included picketing outside the Staples store at Har Mar Mall in Roseville.

Nationally more than 80 Staples stores have opened postal counters and the Postal Service plans to expand the program to all 1,500 stores.

“Staples employees receive minimal training, and the company’s low pay results in high employee turnover,” said Todd Elkerton, president of the APWU St. Paul Area Local. “With all the concern about privacy and identity theft, that’s just not the right way to handle the U.S. mail.”

“Before they are hired, USPS employees undergo a background check, take an oath to protect they safety and security of the mail and are bound by a code of ethical conduct. It’s also taking away good, stable jobs and replacing them with low-wage, high-turnover jobs,” said Peggy Whitney, business agent of the APWU Minneapolis Area Local.

An internal USPS document makes clear that the goal of the program is to replace the jobs held by USPS employees with low-paying jobs in the private sector. “That’s bad for postal workers and it’s bad for our communities and our country,” Whitney said.

“But this isn’t just about postal jobs,”said national APWU President Mark Dimondstein. “Many people are outraged that a tremendous public asset is being turned over to a struggling private company.” Staples recently announced that it would close 225 stores by 2015.

“Staples makes business decisions based on the bottom line, not service to the people of the country,” Dimondstein said. “As a nation, we need to decide what kind of Postal Service we want. Are we going to have a vibrant, modern, public mail system that serves all of the people, or are we going to let privatizers kill this great institution?”

Thursday’s National Day of Action follows dozens of protests by postal workers and community allies in Atlanta, Chicago, San Francisco and other cities.