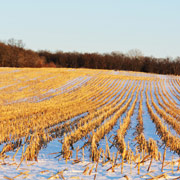 Harvest data suggests Minnesota was America’s Eden during the past growing season. Weather data suggests that status may be short lived. Minnesota might be joining other Central Plains states in a prolonged drought cycle remindful of the 1930s’ Dust Bowl days.

Norm Gronwold, a farmer from Norcross, pondered the encroaching drought while driving home to west central Minnesota from Duluth after Thanksgiving. The snow cover started to disappear as he headed from forests to farm country.

“All we’ve got here is a little dusting of snow in the grass,” the corn, soybeans and small grains farmer said in a weekend phone interview. “The ground is mostly bare. We’ll really need good spring rains to get ready for next year.”

The U.S. Drought Monitor, a collaborative effort among climate scientists and government agencies, provides data that suggests how important weather will be for Minnesota’s and the nation’s economy going into the new year. In its late November report, 40 percent of Minnesota’s land surface was declared to be in either Extreme Drought or Severe Drought classifications. All the rest of Minnesota was classified as in Moderate Drought.

Signaling the threat to the start of another growing season come spring, the report also noted 88 percent of Minnesota’s land resources were classified as either short or very short of subsoil moisture. Subsoil moisture is monitored based on moisture needed to sustain plant life – conditions that now appear threatened if there isn’t a substantial change in weather.

All this makes for uneasy times for Gronwold and neighbors in the Grant, Traverse and Wilkin counties area of western Minnesota that just harvested their best crops ever. Most soybean farmers in his area found from 43 to 48 bushels per acre in their fields, and some farmers harvested 56 bushels per acre – depending on October rainfall.

The Minnesota office of NASS said Minnesota farmers were harvesting a record 1.39 billion bushels of corn with an average yield of 168 bushels per acre – 12 bushels more than in 2011. An acre of land is about the size of a football field. The sugarbeet harvest was also forecast at record production.

The drought, so devastating elsewhere, is taking root in Minnesota. Some scientists and farmers with long memories are worried the trends suggest a multiple year drought and a return to the Dust Bowl era of their parents.

“My dad was born in 1899 and was a good storyteller,” said Gronwold, who took over the family farm in 1974. “Dad knew a lot of the problems in the Dust Bowl days were man-made, or at least influenced.”

Farmland buyers are again expanding operations and ripping out groves, tearing down fence lines and shelterbelts that keep wind erosion in check, Gronwold said. This has a lot to do with the size of farm machinery and with a farmland “bubble” that is building because there aren’t a lot of other good places to park cash.

Corn has been the big economic generator for farm income. Some analysts are now forecasting that American farmers may plant 100 million acres of corn next year, up from 87.7 million acres this year. Such a huge crop will need drought conditions to keep commodity prices anywhere near where they are today, or it will need strong export markets to support prices.

That’s not a given. The U.S. Corps of Engineers is limiting Missouri River water flow into the Mississippi River because of low water levels. The Mississippi, which carries about 20 percent of U.S. grains, may be within days of being shut down to barge traffic. Corps spokeswoman Monique Farmer told the Associated Press that the corps has been told to expect low, stable conditions … “that it’s probably going to stay dry.”

Transportation problems can crimp exports, Gronwold said. So can global financial problems or external geopolitical problems. Meanwhile, we don’t know if Congress will extend the federal farm bill that provides for necessary soil conservation programs that combat Dust Bowl conditions, or if those programs might be lost to government cutbacks if we go over the so-called “fiscal cliff.”

Seeing reminders of what his father said about the Dust Bowl, Norm Gronwold recalls another great storyteller. “I particularly like the old Mark Twain saying that ‘history doesn’t repeat itself, but it does rhyme’.

“A lot of what’s going on looks and sounds familiar. It rhymes.”