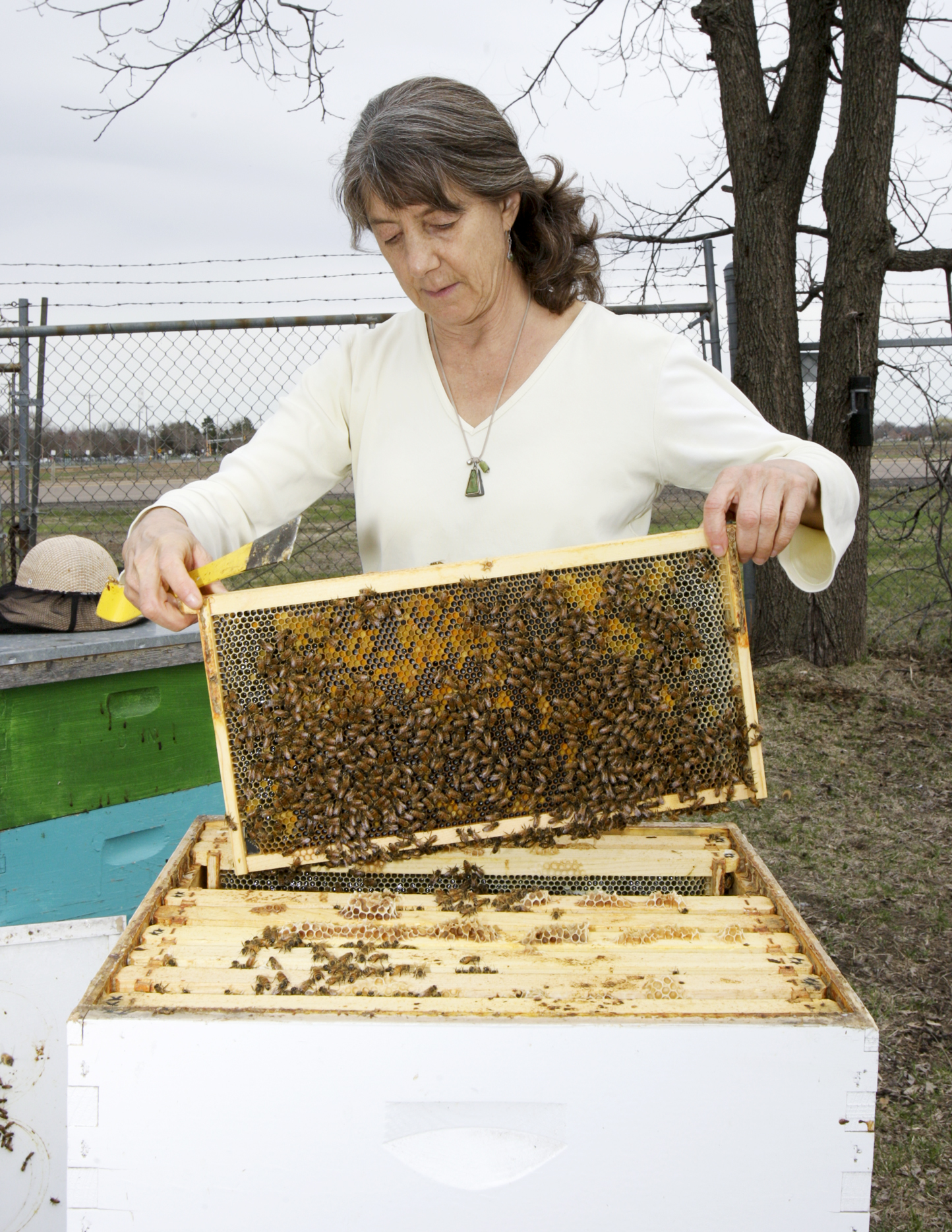 Dr. Marla Spivak of the University of Minnesota’s Department of Entomology inspects a bee hive at the St. Paul campus bee lab. (Photo by Paul Battaglia)

With those words, House Minority Leader Kurt Daudt (R-Crown) summed up his objection to a provision of the omnibus environment, natural resources and agriculture bill April 18, which would appropriate $300,000 for pollinator habitat restoration along state trails.

The House passed HF976 that day by a vote of 69-61, but several Republican lawmakers objected to what they said was wasteful spending, and cited that appropriation as a prime example.

The fact that the Department of Natural Resources directed the habitat be visible to the public along state trails, and may use up to $50,000 of that money for signage and public awareness, didn’t make Republicans any happier.

“One of the areas of wasteful spending in the bill is something I’ve never heard about before, government engaged and endeavored to create bee habitat,” said Rep. Steve Drazkowski (R-Mazeppa). “Three-hundred thousand dollars for habitat for bees, including $50,000 to tell people about the bees that are about to sting them.”

Not surprisingly, Rep. Jean Wagenius (DFL-Mpls), the bill’s sponsor, disagreed with Drazkowski’s characterization of the appropriation, calling it “misleading,” and said money would be given to the DNR for restoration work in state parks and trails, and that pollinator habitat would benefit as a result.

There is little debate regarding the importance of pollinators, and honey bees in particular, to the nation’s food supply. The U.S. Department of Agriculture says bee pollination is responsible for more than $15 billion in increased crop value each year, and that “About one mouthful in three in our diet directly or indirectly benefits from honey bee pollination.” 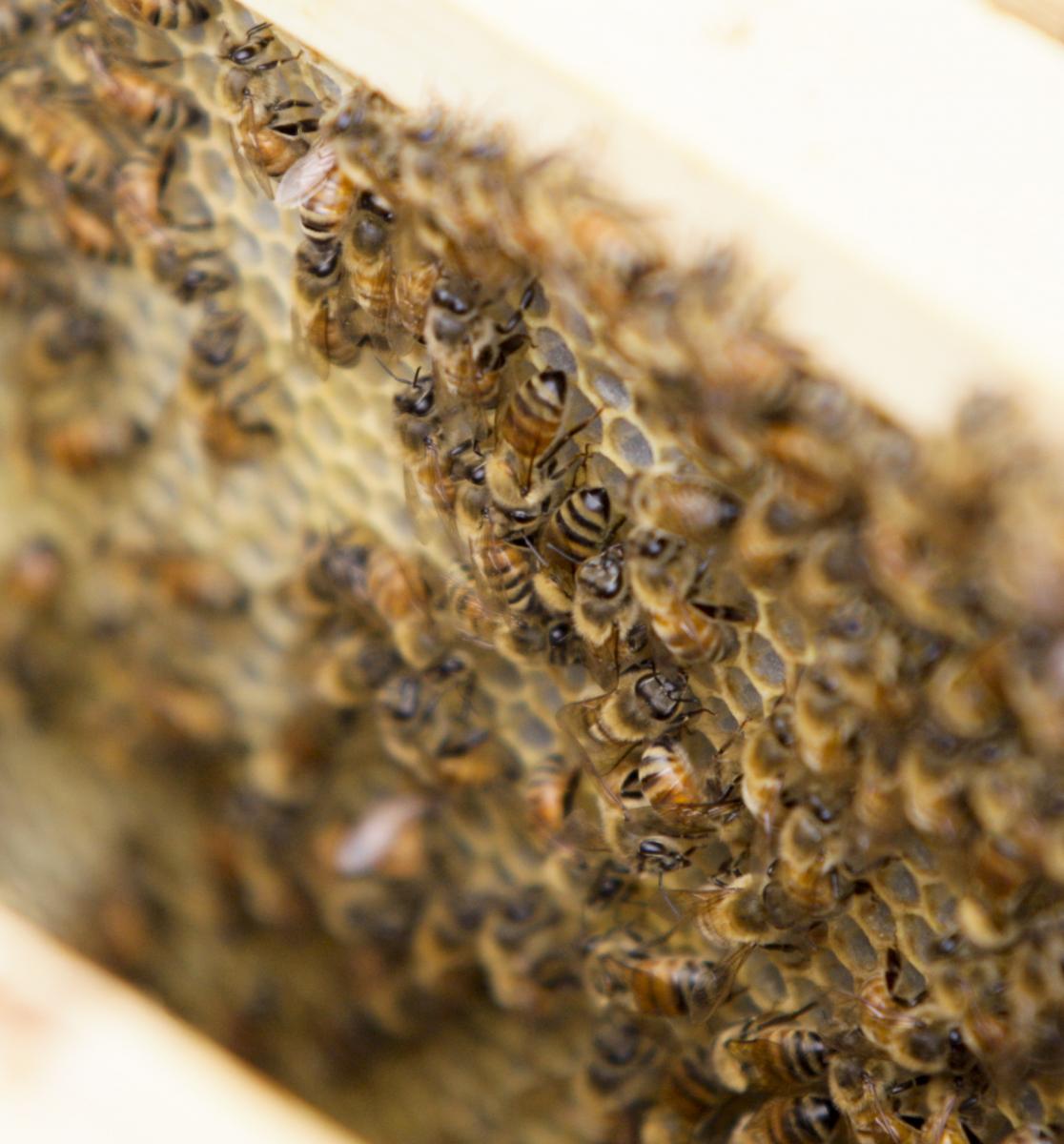 It is also widely accepted that the honey bee population is in serious decline, and the commercial beekeeping industry is threatened by a problem called Colony Collapse Disorder in which most adult bees in a hive simply disappear. They leave and never return.

Although an exact cause, or causes, for the disorder has not yet been determined, the economic harm it has done is adding up. During a presentation at a pollinator summit facilitated by the Environmental Protection Agency and U.S. Department of Agriculture in March, the co-owner of the largest beekeeping company in the nation — Adee Honey Farms, near Brookings, S.D. — said his industry has lost 5.65 million hives since 2007, costing it $1.1 billion.

Minnesota’s beekeepers have had losses of their own. Dr. Maria Spivak, a professor with the University of Minnesota’s Department of Entomology, testified at a House committee meeting earlier this session that the state has historically been one of the highest honey producers in the nation, but production is declining due to a number of factors. One is the lack of habitat.

“There’s simply not enough flowers out there to support good nutrition of our honey bees and the honey production in this state,” Spivak said.

Charles Hendrycks also spoke at the hearing. He and his wife have been full-time commercial beekeepers for 26 years, and during that time he’s seen changes in agriculture that have greatly impacted pollinator habitat.

“I’d say 98 percent of dairy operations don’t even pasture cattle anymore, they’re confinement buildings, they buy hay from the Dakotas,” Hendrycks said. “So those numbers of acres of pasture and hay have decreased dramatically … Anything that we can do to reestablish some of that habitat to offset some of those changes, because of the changes in agriculture, would be of great benefit to our industry and the health of beekeeping and the environment in general.”

Disagreement over how to respond

There is Republican support for legislation to help pollinator habitat. Rep. Paul Torkelson (R-Hanska) co-sponsored HF595, which would direct DNR to establish criteria for a program to provide enhanced habitat for honey bees, and other pollinators, on state lands. But that language was not included in Wagenius’ bill.

“The folks that take care of beehives are very important for pollinating crops all around the country,” Torkelson said. “These beekeepers are having trouble keeping their bees alive. These bees are dying suddenly, and part of the reason is that they are not well fed.

“[ HF595] really talked about establishing good food for these bees to be healthy during the summertime, and the language in the bill really doesn’t reflect that at all. It’s completely different from what we introduced. You’re talking about habitat along trails; you’re talking about putting up signs.”

Wagenius said educating people about the importance of pollination and pollinators was a good idea and that, while she shared Torkelson’s concerns, her bill does more than the original legislation asked for, directing DNR to include growing plants that are good for pollinators throughout the growing season when doing restorations.

“You did not include any money,” Wagenius said. “We spent some money and we changed policy.”

Beyond the Bill is an occasional Session Daily feature that takes a closer look at the issues driving legislation.