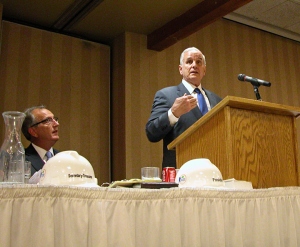 One by one, DFL state lawmakers took the podium on the opening day of the Minnesota Building and Construction Trades Council’s annual convention July 19-20 in St. Cloud. Invariably, each offered a variation on three common themes:

Delegates to the Building Trades Council, which represents 50,000 union members in construction trades statewide, greeted Dayton with their warmest reception of the convention. Council President Harry Melander praised the governor’s leading role in efforts to pass a bonding bill and finance construction of a new Vikings stadium – initiatives that will create thousands of jobs for union members.

Dayton deflected the praise back to his audience. “You really were stupendous on turning out, standing up, letting (lawmakers) know where you were at,” Dayton told delegates, pointing to rallies staged at the Capitol by unions in favor of bonding and stadium bills.

Dayton also praised delegates for stepping up in one battle the governor was powerless to fight: Republican efforts to put a constitutional amendment regarding Right to Work on the November ballot.

“That was absolutely your victory, achieved by strong leadership, by standing strong together and by putting the pressure on (Republicans) – and they backed off,” Dayton said.

Melander warned that Right to Work “will continue to rear its ugly head” until voters install pro-labor majorities in the Minnesota House or Senate. For now, he added, the council must continue to count on relationships with members of both political parties.

But Rep. Tim Mahoney, a DFLer and a member of St. Paul Pipefitters Local 455, said it is becoming increasingly difficult to work across party lines at the Capitol. “This crew that came in last election, they had all the answers,” he said. “They didn’t really bother to talk to anybody. I’ve been there 14 years, and I’ve never seen that kind of behavior before.”

Senate Minority Leader Tom Bakk, a former member of the Carpenters Union, cautioned delegates about the risks of backing Republican candidates on the ballot this fall. Operating Engineers Local 49, one of the state’s largest Building Trades unions, announced July 12 it will support Republican U.S. Rep. Chip Cravaack in the 8th Congressional District, a seat targeted by Democrats this election cycle.

“I’m concerned about some of the endorsements I see coming down… It confuses our membership,” Bakk said. “(Republicans) don’t share the same values about improving the standard of living of working class people.”

House Minority Leader Paul Thissen, a Minneapolis DFLer, said keeping their majorities in the Legislature will embolden Republicans to wage more attacks on unions and their members next session.

“After the Wisconsin recall election, the very next day, House Speaker (Kurt) Zellers was on the radio saying (the results) are a signal to us of what we can accomplish if we’re in the majority next year,” Thissen said. “If they hold on to their majority, we are going to see a Right to Work constitutional amendment coming – undoubtedly.”

Jobs on the horizon

Although election-year rhetoric dominated much of the convention’s first day, some speakers looked forward to the jobs soon to be created on major construction projects throughout the state.

Lester Bagley, the Minnesota Vikings’ vice president for public affairs, said the process of building a new stadium in Minneapolis is entering the design phase, with groundbreaking following as early as April 2013. The team plans to begin play in the new stadium during the 2016 season.

Noting that the stadium bill passed both the House and Senate with a majority of DFL votes, Bagley also made a point of thanking Building Trades delegates. “A lot of that was due to (DFLers’) vision of doing the right thing and creating thousands of jobs, but it was also because of their relationships with you,” he said.

But the governor couldn’t resist pointing out that the bonding bill could have created more jobs, had Republicans in the Legislature accepted his proposal for a $786 million package.

“They cut a third of it out,” Dayton said. “They left 7,000 jobs sitting on the table at the Capitol (because) it doesn’t fit their ideology.

“They don’t get that the public sector, we the people, have a role to play in creating jobs. The role of government is to make things happen… It’s we the people, pooling our resources together to accomplish things we can’t accomplish by ourselves.”