This past Saturday night, I met up with my friend Jake* while he took a break from driving people around the Twin Cities for both Uber and Lyft. For those unfamiliar with these car-sharing services, both companies serve as brokers of sorts between drivers and riders, who connect via free smartphone apps. The companies get 20 percent of every fare; the drivers keep the rest. Jake says he can make up to $20 an hour, which “isn’t bad for a weekend gig.”

But Jake’s not really in it for the money. He’s attracted to what he calls “peer-to-peer resource sharing”:

“I thought it was silly at first, but then I became interested in it because it’s part of the sharing economy. It’s like when anyone offers their time, their home, or their skills to others to use. It’s sharing with your neighbor. It’s anti-consumerism.”

Although Jake currently drives for both Uber and Lyft, he’s far more enthusiastic about Lyft’s community-oriented culture. While the Uber experience is more akin to taking a traditional taxi, Lyft’s tagline, “your friend with a car,” reflects the company’s emphasis on offering fun, friendly, and safe rides. Drivers use their own cars, but they are given fuzzy pink moustaches to hang over their grills, and are encouraged to make their cars unique. Riders generally sit in the front seat so they can chat with drivers. Jake offers his Lyft riders Lindt truffles, and has an R2D2-shaped charger at the ready for their mobile devices. Sometimes he hands out flyers advertising local events.

Jake’s depiction of ride-sharing points to the potential benefits associated with innovation in transportation services. Yet it also overlooks some of the realities that make such systems problematic. For instance, licensed and regulated car services, such as taxies, must pass inspections, be properly insured, and pay fees that car-sharing services can avoid. And car-sharing seemingly disregards city ordinances and permits – airport police at LAX are currently issuing citations to UberX drivers because they don’t have the permits required to pick up passengers.

Confusion over insurance coverage also persists. Although ride-sharing companies offer insurance for damage that exceeds a driver’s own coverage, some drivers are being dropped from their policies since most don’t cover commercial use. Jake says many drivers keep quiet about their activities for fear of encountering this problem.

Despite these issues, car-sharing services are usually able to take advantage of various municipal loopholes to initiate operations in a new city – but they seldom go unchallenged for long. Proponents of collaborative or peer-to-peer consumption often argue that attempts to ban car-sharing services are rooted in the desire to halt competition rather than ensure passenger and road safety. 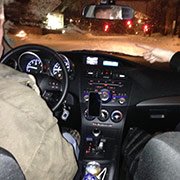 Uber has long insisted it should be exempt from most regulations governing hired transportation because it is a technology rather than transportation company. Despite ongoing legal disputes, the company recently initiated cost-cutting on fares to boost its competitiveness with taxis. Lyft makes a similar argument, and has an operational structure that allows it avoid some regulatory obstacles: riders can decide if they’d like to pay the “donation” rate that appears on their smartphone at the end of a ride. Of course, their decision impacts the rating their driver gives them on the Lyft app, which affects their ability to get future rides.

Emerging forms of collaborative consumption – like car-sharing services – have the potential to introduce healthy competition and innovation into markets, give people the benefit of ownership with reduced costs, and, as Jake says, build community by “connecting strangers through short, random interactions.” However, their incorporation into everyday life shouldn’t occur in a way that disregards regulations and ordinances designed to ensure drivers make fair wages and travel is safe. Everyone needs to play by the same rules – it remains to be seen how the proliferation of car-sharing services will shake up those rules in the months and years to come.