International relations have always been dominated by the theory of ‘political realism’. Those who believe otherwise are often disappointed because frankly it is everyone for themselves in a world that seems to grow apples on orange trees. If you try to wear a different lens from realism, you would either practically be a lost or confused soul in this world. Rumsfeld simplifies the maze with his quote that ‘There are known knowns; there are things we know we know. We also know there are known unknowns; that is to say we know there are some things we do not know. But there are also unknown unknowns – the ones we don’t know we don’t know.’ The relationship between the United States and Egypt or in general some of the western states with autocratic regimes is complex. The general consensus is that great powers like the United States focus on interests rather than ideology. This reality has led critics to accuse the U.S of violating the commandment, ‘Thou shalt not have it both ways.’ Realism is the concept in international relations that prioritizes national interest and security, rather than ideals, social reconstructions, or ethics.

The last decade redefined or affirmed America’s foreign mission to spread democracy in the world. This freedom crusade was a major element of the Bush doctrine that further reinforced the notion of promoting democratic regime change with the available option through force, if necessary. America’s commitment to democracy and free institutions is a message that continuously flows from the leadership establishment to every corner of the world and in any speech pertaining to international relations. This doctrine has provided false hope to many waiting for the winds of freedom. The realist perspective would clarify that this is another case of national interests disguised as a moral prerogative. The demonstration in Egypt called the western world’s bluff particularly America towards their commitment to spreading democracy. There was some hesitation from the United States government to respond to the events in Egypt. The two day flip in foreign policy from supporting a strong ally President Hosni Mubarak ( a known-known) to delicately support the masses protesting on the streets ( the known-unknowns) is an indication of ideology clashing with interest. 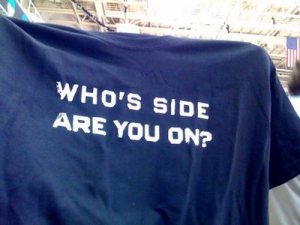 Understanding the way nation states act on the international stage is critical in dissecting this dilemma. Egyptian protestors on the streets of Cairo have been asking why the American government is supporting an authoritarian ruler such as Mubarak. Some in other corners of the world have started questioning the commitment of the west towards promoting democracy and human-rights around the globe? Are there exceptions to the rule? Is regional stability and friendship immunity for autocrats to retain power? There is certainly growing anger and mistrust of the freedom crusade from international actors. As political realism suggests, the international stage has no presiding government to legislate a code of conduct or justice. The United Nations is a sleeping giant and as we have seen during numerous international conflicts, the interventions occur after the fact. Without a key and overriding global government-the international scene is characterized by anarchy. Treaties and regional organizations create some sense of order and stability. Fear and hostility are often inevitable. However, common interests can offer a critical bond between nation states. America’s strong partnership with Israel meant Egypt was always a critical piece of the puzzle towards the ever elusive peace in the middle-east.

Realism reminds us that nations will do whatever it takes to satisfy their self-interest. Morality is often non-existent beyond the state actor’s boundaries. On several occasions we have seen foreign aid and even political lifeline guaranteed to repressive regimes by western powers. These favors are always in exchange for identified interests, material or ideal. In the philosophy of realism, states are the key actors and other actors are often characterized to be of less significance. The power of the people is often overlooked. Revolutions expose the vulnerability of state actors. Public disaffection with the leadership hierarchy can reach a tipping point as evident in Tunisia and Egypt-this has the potential to create havoc in the dynamics of realism. Once the masses become fearless there is nothing else-but the fall of the regime. The public rebuke of the State of Egypt forced the government of the United States to rethink their foreign relations with an authoritarian regime. A collision course is therefore possible between angry masses of a repressive nation state with a global hegemony. The reality that the protesting masses (known-unknowns) without an established model of a state can influence a global power to change course- is a critical lesson learnt from the quagmire in North Africa.

There has always been a conflict between politics and morals. Millions of people live under repressive regimes that deny them basic human-rights and plunder national resources. As the world becomes more connected, coalitions between democratic and repressive regimes are inevitable. However, a line has to be drawn between morality and expediency. Global state leaders have the bargaining chips to demand transparency and better governance from non-democratic and autocratic state actors. Thus true politics can never take a step without rendering homage to morality. Though politics by itself is a difficult art, its union with morality is no art at all, for this union cuts the knot which politics could not untie when they were in conflict. The rights of men must be held sacred, however great a sacrifice….. All politics must bend its knee before the right. -Immanuel Kant.