Minneapolis Department of Civil Rights director Velma J. Korbel proposes changes to the Civilian Review Authority. Korbel seeks to boost efficiency in the process of the investigation of complaints about police officers. (Photo by Eric Tanaka)

Two separate proposals are looking to reduce the already-limited power of the civilian board that investigates complaints about Minneapolis police actions.

A proposal from several city officials would replace the 11-member Minneapolis Police Civilian Review Authority with a panel of two police officers and two civilians, which would have the final say before passing the complaint to Minneapolis police Chief Tim Dolan.

Meanwhile, the Police Officers Federation of Minneapolis helped introduce bills in the state Legislature that would limit the role of the CRA so that it could only make recommendations about the “merits of a complaint” and prohibit the board from issuing a “finding of fact” that misconduct took place, which carries much more significance.

Donald Bellfield, chairman of the CRA said both the city proposal and the bill in the Legislature would dismantle the board and greatly reduce the authority’s ability to oversee police misconduct.

He added he is more concerned of the bill going through the Legislature.

“But they both chip away at our authority,” Bellfield said.

City officials have been working behind the scenes to make changes to the CRA.

The revamped CRA would address the lack of disciplinary action taken by Dolan and also speed up the investigation process.

The new CRA would be known as the “Police Conduct Oversight Commission” and would include the “Determination Panel,” consisting of two police officers and two civilians.

This panel would review complaints before forwarding them to Dolan.

Dolan said the current structure processes complaints too slowly, and he doesn’t act on as many recommendations because they are too old and not relevant by the time he sees them. Dolan rejects most of the CRA’s recommendations for discipline. Between 2006 — the year he took over — and 2010, Dolan has acted on only 34 of 105 recommendations.

“I think having civilian oversight of officers is very important, and we don’t want to lose that. We just want it to be fair,” Dolan said. “And fair means it needs to be timely and the discipline needs to be appropriate.”

At the CRA meeting Wednesday night, Velma Korbel, Director of the Civil Rights Commission, which oversees the CRA, explained the proposed change to members of the board and disgruntled members of the public.

Many board members expressed frustration that the CRA was not involved with the proposal.

Korbel left the meeting abruptly after refusing to hear public testimony. People in the packed city hall room yelled, “We want justice!” and called for resignations as Korbel exited.

Korbel said the plan is subject to change, and the city hopes to have an official plan “by the end of the next budget cycle.”

City Councilman Cam Gordon said he supports improving the CRA but added that he doesn’t think the CRA’s role should be reduced any further.

“I think it’s good to have independent outside community members who are not so engrained in that police culture,” Gordon said. 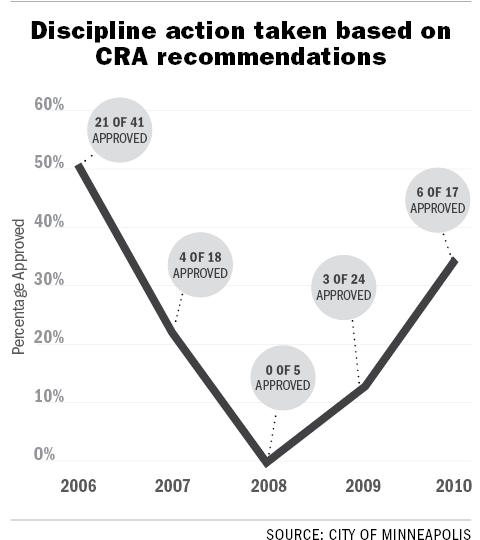 According to Minneapolis ordinance, the board can’t discipline any officers, but they can issue findings of fact, which essentially serve as an official complaint against an officer.

These complaints are then forwarded to Dolan, who chooses whether to discipline officers based on the CRA’s findings.

The House bill, authored by Rep. Ron Shimanski, R-Silver Lake, was introduced Feb. 20 and had a second reading in committee last week.

The bills are moving through the House and the Senate with bipartisan support, but the bill hasn’t received support from any Minneapolis representatives.

Delmonico said the union chose to lobby for the bills in the Legislature because these findings of fact unfairly hurt police officers’ reputations.

“Without experience, training or education in the police force, I question if they’re making accurate decisions.”

Bellfield said the board serves as an important and independent watchdog over the MPD.