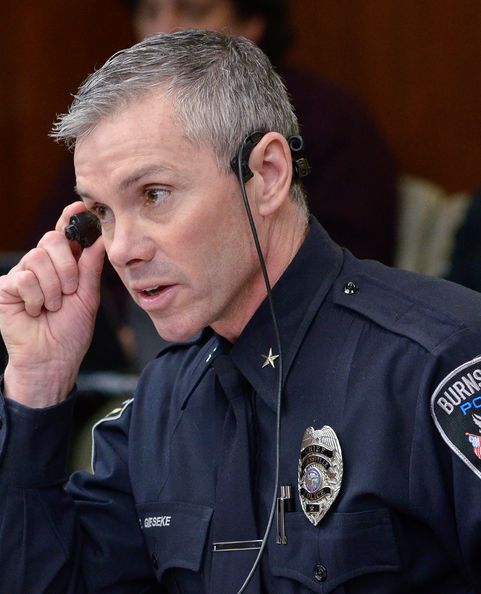 Burnsville Police Chief Eric Gieseke, who said his department was a pioneer in the use of body cams, brought several models from the past to show the devices’ evolution. From the time of the city’s first homicide scene caught on responding officers’ body cams, “we were believers,” he said. The video “preserved evidence in such a way that it helped us build our case.”

Don Gemberling, Minnesota Coalition on Government Information board member, said the body camera data falls under the state’s data practices law, with the presumption that all government data is public unless the Legislature makes exceptions.

Videos showing multiple people raise special problems, he said, when some of those shown are protected under state privacy laws and others are not. Gieseke said responding to a public data request meant two days of work for his department to blur and redact 13 minutes of body cam video.

Rep. Debra Hilstrom (DFL-Brooklyn Center) expressed concern about videos classified as public data that show children or people who are naked or partly undressed. She said a website outside of Minnesota streams body cam video obtained through an ongoing public-data request.

The concern about video from first responders at private homes becoming public data was personal for Rep. Nick Zerwas (R-Elk River). “I’ve been on the floor unable to move, suffering from a stroke,” he said. “I looked terrible and it’s embarrassing.”

Rep. Peggy Scott (R-Andover), who chairs the committee, warned of a “law enforcement-industrial complex,” with commercial vendors pushing new technology that “just keeps upping the ante. Our privacy and our personal space around us is shrinking. … We don’t want a policy just for body cams. We need an overall policy.”

Gemberling, likewise, urged the committee to take a broad view of privacy issues rather than focus on devices of the day. “We do live in a surveillance society,” he said. “What kind of surveillance society do you want to live in? How far should we go?”

Earlier in the meeting, the committee heard testimony from Bloomington Police Chief Jeff Potts and privacy advocate Rich Neumeister on law enforcement agencies’ use of license plate readers. Committee members said they expect to see legislation proposed this session on both topics.