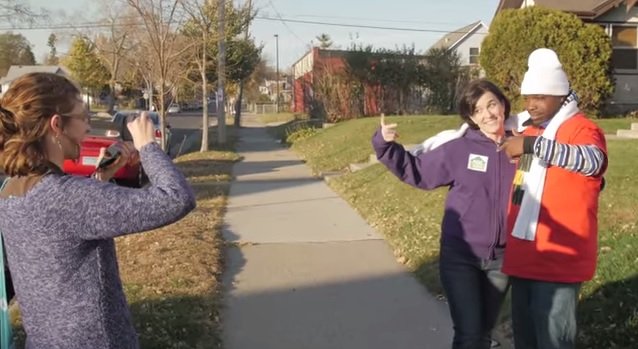 (Still from video by Neighborhoods Organizing for Change)

Everybody’s talking about #Pointergate, the absurd KSTP story of Minneapolis Mayor Betsy Hodges, where she is supposedly flashing a gang sign with a 22-year-old man from north Minneapolis who is working to get out the vote.

Yes, on one level, this is a story that reeks of disgruntled police officers/ex police officers airing a vendetta against the current chief of police and mayor for their efforts to “clean house” by chipping away at the old guard and instituting new policies such as body cameras that will make the force more accountable. As others have pointed out, there seems to be no coincidence that the KSTP story came out just prior to the roll out of the new body cams.

But there’s another level to this story as well. Here we have Navell Gordon, a young man who has served time for a felony and is currently unable to vote because his probation period hasn’t ended. Working with the Neighborhoods Organizing for Change, Gordon was helping others in his community to vote where he could not. That’s something that should be applauded and his situation is one that offers an opportunity for reflection about the ways that people of color still are systemically disenfranchised.

Earlier this fall, the ACLU released a report that took a look at the racial disparities of arrests in Minneapolis, and the numbers are quite shocking. In an article about the report, the Star Tribune writes that Blacks are “11.5 times more likely to be arrested for marijuana possession, even though advocates say that white and black people use the drug at similar rates.” Further, Blacks are almost nine times more likely to be arrested for disorderly conduct than whites, with similar disparities for vagrancy, minors violating curfew and loitering arrests, according to the Star Tribune.

With such stark disparities in arrest records, we have a situation where African American citizens disenfranchised through the systemic racism of the judicial system, because with higher arrest and sentencing rates, they are also more likely to be disenfranchised.

5.85 million Americans can’t vote because of laws that restrict voting rights for people with felony convictions, according to the felony project. What’s more- 1 in 13 African Americans are unable to vote. Those startling statistics are what we face in terms of the new Jim Crow.

In Minnesota, we don’t have the strictest voting restrictions for ex-felons voting, but we don’t have the most lenient either. While some states allow any person, even if they are currently incarcerated, to vote, Minnesota does not. Other states allow ex-felons to vote once they have completed their parole, but Minnesota goes one step further and says they must also complete their probationary period. At least we’re not as bad as the 11 states that may restrict voting rights for ex-felons permanently.

So here we have a 22-year-old man who made mistakes at an early age and not only is trying to turn his life around, not only is he helping others by getting out the vote, but he is also advocating for changes in these draconian laws that disenfranchise African Americans. And what does he get for it? He gets slapped with a ridiculous accusation that he is making a gang sign. The absurdity of it certainly points to mistakes made by KSTP and by whatever vindictive forces were at work that don’t like the chief of police and the mayor, but the incident offers a learning opportunity for all of us to really take a look at how the cards are stacked against people of color in our own progressive Minneapolis and what we can do to change it.