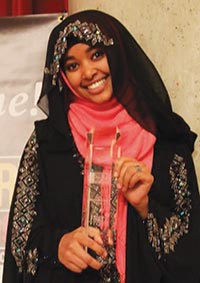 Faiza Abubakar loves language. A native Oromo speaker from Ethiopia, Abubakar is the reigning state champion for Poetry Out Loud, a nationwide contest in which students test their skills of oration and interpretation with poetry. She is starting her junior year at Ubah Medical Academy, a Hopkins charter school.

When Abubakar was a freshman, her English teacher, Staci Carroll, required her students to memorize a poem for Poetry Out Loud. Abubakar didn’t have time to finish the assignment and recalls surreptitiously holding the words of her poem as she read it.

“The way she tells it, she says she was trying to keep me from noticing that she hadn’t actually memorized her poem,” Carroll recalls. “I thought she was joking. I saw confidence and savvy in her that she was even trying to fake it.”

Carroll told Abubakar that she – along with several other students – would get another chance. The second time, “I thought she was brilliant,” Carroll says, describing her student’s gift for articulating emotion through her voice. At the schoolwide competition, “she had the entire student body with her,” Carroll says. “It’s remarkable the way she was able to engage with the poem and to command the attention of the students.”

Abubakar placed second statewide that first year, and was motivated to do even better the following year. Determined to go to the national Poetry Out Loud competition, hosted by the National Endowment for the Arts and the Poetry Foundation, she put in extra time to perfect her presentation.

In choosing the required three poems, Abubakar looked for works that spoke to her. “If it doesn’t move you, how are you going to move your audience?” she says.

Abubakar was particularly drawn to Latino poets, due to her love of Spanish, which she attributes to an especially supportive teacher in Anwatin Middle School’s Spanish Immersion program, which she had previously attended. The Latino poets she chose were Benjamin Sáenz and Jimmy Santiago.

When she performs, Abubakar tries to get into the poet’s head, what they were thinking about when they wrote the poem. “I feel it’s my responsibility to make sure that the audience also feels that way just based on my recitation,” she says.

Her work paid off, and Abubakar became state champion last spring. She traveled to Washington, D.C., for the national contest, where she met Ellison, who invited her to become an intern in his Minneapolis office.

Dealing with ups and downs

The youngest of seven children, Abubakar moved from Ethiopia with her siblings and her mother when she was about 6 years old. When Abubakar was in middle school, her mother returned to Africa, and Abubakar moved in with her aunt, where she now lives with her brother and her aunt’s children in north Minneapolis.

The separation from her mother has been difficult. Although they speak regularly, Abubakar has had to become more independent. “You have to get used to getting up on your own with an alarm clock, because there’s no one to nag you out of bed,” she says.

From that experience, she has learned that the ups and downs of life aren’t permanent. “If something goes bad, you have to look forward, because it’s not forever,” she says.

Abubakar tries to keep that in mind when she practices for poetry competitions. “You can express so much in the language,” she says. “It gives you so much room to do things that you wouldn’t be able to otherwise. … It’s magical almost.”

What: “Poetry Out Loud: East African Voices,” a reading that includes 2014 Poetry Out Loud Minnesota winner Faiza Abubakar and other local writers. University of Minnesota Prof. Abdi Samatar will moderate a question-and-answer session after the reading.