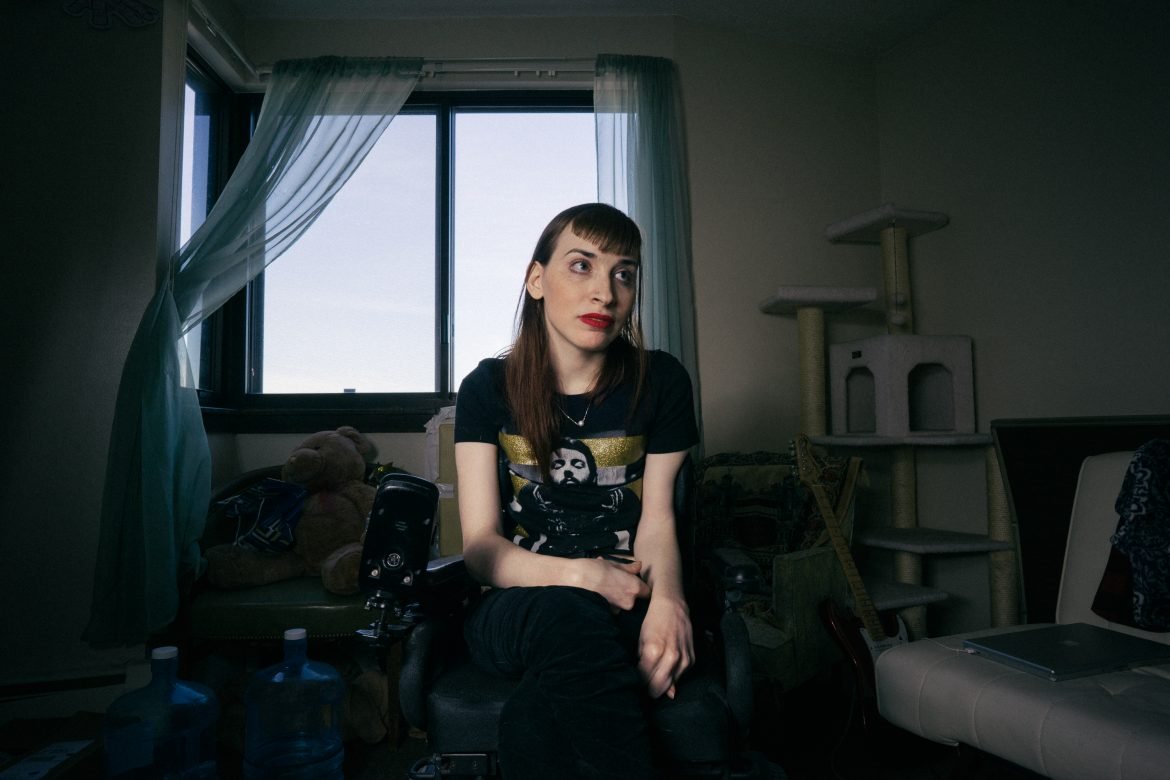 Minneapolis poet Adina Burke, who identifies as a bisexual woman with Cerebral Palsy, has heard it all when it comes to how folks react to her identities. Some of the worst responses have come from folks she’s dated and even outsiders who comment about her relationships.

“My partner who is a cis male, gets high fives and thumbs up for doing things a normal loving boyfriend would do like help me with my coat and ex-girlfriends have gotten praise from their peers because of how inclusive they are being by dating me,” Burke says. “But I’m not a Mitzvah project.” While Burke’s partners are lauded for performing basic relationship duties, she has found that she frequently asks herself, “What do I have to offer?” and worries that she is burdening her partner with her disability.

“I’m a person with a lot of great qualities, and I’d like to live in a society one day that views my partner as lucky as I am to have them,” she says.

Outside of intimate spaces, being disabled sometimes excludes her from attending social events geared towards the queer community. Disability access in public spaces commonly caters to folks with impaired mobility, excluding folks with other types of needs the same level of access and agency in community space. Burke has found that the stigma of having Cerebral Palsy makes people treat her with pity as if she is fragile or to be avoided at all costs.

As an artist, Burke says one of her biggest challenges is facing the way folks with disabilities, especially in the queer community, are represented.

“There’s this aura of rebellion. That’s why I’m drawn to [storytelling], and I now live in a world where those who have constantly held the mic are now passing it. Storytelling is wonderful for that,” she says.

Burke believes that storytelling is important for folks with disabilities in the queer community because it can provide a space to connect to voices that have not been heard in the past. “It allows the lifting of voices to echo, ‘you are not alone.’ And in a society that views and values what I like to call ‘Lone Wolf syndrome,’ this is vital. Storytelling is survival,” she says.

The Lone Wolf syndrome is explained by Burke as society’s pressure for people to live separately rather than jointly, which often allows transcendent stories and shared experiences to go unheard.

According to Burke, the queer community and the disabled community have more in common than not. Storytelling has allowed Burke to escape isolation and find people who do understand her lifestyle and have stories of their own to relate.

Angela Carter, a self-identified queer crip scholar and educator at the University of Minnesota says many of the public places for the queer community – such as bookstores, bars and coffee shops – are often not accessible to folks with disabilities.

Carter also says that sex has been limited for folks with disabilities in a historical context because many of these people have been represented as asexual or hypersexual due to a common misunderstanding of individuals with disabilities, especially in the queer community.

She has also seen a lot of positive overlap between the two communities. From the community outreach and solidarity to the artwork, writing and activism, the queer community and folks with disabilities both also use reclamation as a strategy to overcome oppressive language, like the terms “crip” and “queer.”

The importance of acknowledging the connections between disability and the queer community spans far outside of the classroom. According to Jay Wilson, Senior Access Consultant at the University of Minnesota Disability Resource Center (DRC), queer and trans folks with disabilities have been central to many queer and trans communities in the Twin Cities.

“A lot of times, the disability parts of our identities or experiences aren’t recognized. The ways in which we contribute may be different,” Wilson says. “For example, when we have a flare up of health disabilities, we may do activism from bed for 10 minutes a day, or we may participate by showing up to events and actions when we can.”

“Guardians and segregated living settings have the power to prevent people from going to a GLBT support group or event, date someone of any gender or physically or socially transition gender,” he says.

Whether people are being denied access to the queer community, are unable to attend events due to disability or are excluded from their own community due to lack of understanding of the intersections between disability and queerness, the use of storytelling can help everyone understand each other’s lived experiences a little better.

“I am not a trophy,” Burke said. And hopefully through her stories society will know too.

Wilson recommends a number of resources, locally and nationally, for people who are members of the queer community and disabled community or for people who simply want to learn more about the intersection of the two.

hclouart, Heather C. Lou’s art on themes of resistance by people of color who are queer and disabled.

Eli Clare, movement leader who first articulated much of the complexity in queer/trans disabled life.

Icarus Project, “grassroots support network and education project by and for people who experience the world in ways that are often diagnosed as mental illness.”

Madness and Disability, workbook for thinking about the ways that ableism, gender/sexuality oppression, racism and other oppressions impact mental and physical health.