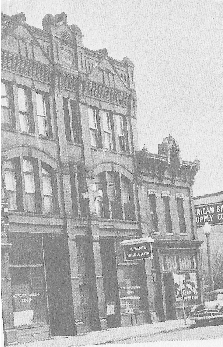 The old hotel at 322 Plymouth Ave.

Do you know Plymouth Christian Youth Center for its Arts & Tech High School, or for its children’s gift sale where kids buy presents for their families for just nickels and dimes? Or its crucial role, as owner of the Capri Theater, in revitalizing its corner of West Broadway Avenue with more to come?

It’s all of the above, and more. Marking PCYC’s 60th year of operating, Executive Director Anne Long gave remarks at a celebration held Oct. 31 with the agency’s annual meeting at the Capri. She said, “we like to own property and to build special places in support of effective programs that improve lives and make our community stronger. We keep our leaders a long time and value staff and board as the heart of our work.”

Indeed, Long is only the fourth executive director since the first was called in 1956, and the history is dotted with properties acquired, many through donation.

On April 20, 1953, informal meetings started to talk about the Lutheran churches’ responsibility to reach out to “un-nice boys” in the inner city. Luther Seminary professors, headed by Dr. Andrew Burgess with seminarians Bob Evans, Bob Nervig and Oz Anderson, were joined by representatives from the ELC Board of Charities, Lutheran Welfare Gospel Mission, Saint Paul Juvenile Court and Red Wing State Training School.

Liberty Lutheran Church owned an old hotel at 322 Plymouth Ave. N., and Nervig arranged to use it for Plymouth Christian Youth Center with Rev. Ham Muus as Coordinator. Evans and Anderson did the first outreach service when they and eight youths shared a canoe trip on Moose Lake in July 1953. Oz Anderson interned in Red Wing, laying the groundwork for the Kinsmen program to help juvenile offenders returning home. The organization’s formal clock started in 1954.

By 1959 when PCYC became “a corporation of individuals,” Muus had been called (in 1956) as Director and Rev. Bob Evans as Associate Director at PCYC while Anderson became Chaplain at the Red Wing State Training School.

The corporate structure changed in the 1980s to its present corporate congregation status with 21 Lutheran church congregations coming on board. 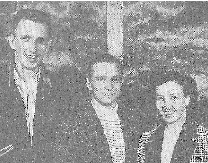 Assembling the 25-year history, Ann Sieving, newsletter editor, and then-Executive Director Owen Turnlund commented that it was challenging to show four distinctive program areas on a single timeline, or to show growth from “a handful of children to 2,800 youths being served. From no budget to next year’s $550,000 budget.”

(Compare further, the agency now has a $4 million annual budget and serves 4,000-plus through community meetings, events and services alone, thousands more as audiences at the Capri and hundreds more through the school and school related programs.)

Above: Ham Muus, Ray Runkel and Vi Handal, the first staff at the Plymouth Center.

In 1956, Miss Birgitt Anderson donated her family farm near Effie, Minnesota, to become Frontier Farm, noted in 1960 in use as a summer camp by community Kinsmen youth. In 1972 it became a group home for county-referred youth.

The Wilderness Canoe Base was built on Seagull Lake lands acquired in 1957 (in what is now the Boundary Waters Canoe Area). In 1979 an extra 50 people were hired for the Wilderness summer staff to facilitate family camping; a Women’s Auxiliary Wilderness Adventure was offered and Wilderness expanded to include year-round programming.

In 1999, after much discussion, Wilderness Canoe Base was leased to the Lake Wapogasset Lutheran Bible Camps who still host about a dozen PCYC youth each summer.

In the early years, experiencing how others live was an important theme. There was benefit in getting inner-city youth out to experience farm life or to challenge themselves by canoeing. Then in 1965 “journey to the city” began, bringing rural and suburban youths to be “exposed to urban situations, its problems and services.”

The idea of kids buying presents for their families for nickels and dimes came about 50 years ago, when the Women’s Auxiliary first organized the gift sale that continues today. Children shop, with volunteer help to choose and wrap, while their adults hang out for holiday cheer at the Capri next door.

Also in 1964, Shirley Dahlen started the Kinswomen, similar to the Kinsmen.

In the 1950s, “the Center on Plymouth was the place for many clubs, crafts, retreats, and religious services. There were wonderful annual carnivals in the big gym, a workshop in the basement, sewing classes, weaving on the big loom. Chapel Sunday School, church and choir. And delicious dinners the volunteer women would come in and prepare,” according to a 25-year history by Marion Harris.

But in 1960, Pastor Bob Evans accepted a call to Prince of Glory Lutheran Church, a new mission church of the American Lutheran Church serving the same neighborhood as PCYC, moving the congregational and religious functions to the church while PCYC retained the community and youth/family activities. 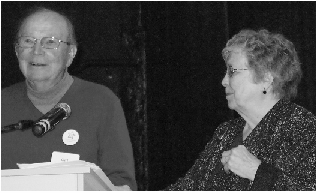 The same year, Chaplain Curt Johnson became Kinsmen Director; in 1967 he was named Executive Director and the Kinsmen and Kinswomen merged into Kinship.

The move to Broadway

The move from Plymouth Avenue to 2301 Oliver Ave. N., just off Broadway, happened in 1969. Harris’ history noted that at one time Liberty Lutheran had rented space at 2301 Oliver for services.

In 1971 the PCYC Alternative School, known as Northside Street Academy, started with about 10 youth.

In 1973, several clubs and efforts began: PCYC staff and volunteers helped ease tensions in area elementary schools caused by bussing and school closings, through “Friendship Groups.” The summer park program at Cottage Park and in the Willard Homewood area got established. Jim Long was hired first for the park program “and I tagged along” said Anne Long; she quickly moved into working with outreach to younger kids, they both went into the Friendship Group program.

There was also the Northside Swingers, a social group for young adults described then as “mentally retarded” began in 1973, and a support group for neighborhood women, the “Mothers Club.” Neighborhood youth ages 4-12 were welcomed daily to PCYC for games and companionship.

In 1978 Owen Turnlund, MSW, became executive director, on leave from the Minneapolis Public Schools. Anne Long had become PCYC’s director of social services, worked in communications and was development director when Turnlund retired in 1999 and she was appointed executive.

Jim Long, meanwhile, had taught in the Minneapolis Public Schools for 18 years; he retired from the district and now serves part time managing facilities at the agency.

A Metro Lutheran newspaper article about Turnlund, written in 2003, said 1978 found PCYC “in a time of financial difficulty. There had been a break-in and fire several months earlier at the Oliver Avenue North facility. Lutheran Social Service came to PCYC’s immediate rescue.”

After that, “I created a five-legged stool of financial support,” Turnlund told Metro Lutheran. “That way, if one was foreshortened, we wouldn’t fall over.”The five legs: The Minneapolis Public Schools, The United Way, private foundations, individual Lutheran donors and, eventually, an endowment fund.

In 2004, PCYC invested and moved with the school into new quarters at 2210 Oliver Ave. N. which incorporated renovation of a former car dealership; the old 2301 building was razed for parking and gardens. The Capri was renovated and is in an exploratory phase of fundraising to build an addition. PCYC or the City of Minneapolis own almost the entire block.

“Our academic programming is strong, there are always kids that need extra, and we are here to help them. The community is at the center of it all,” Long said. “The Capri block is key, to the kids and what they can do in the theater, and also to make the area a more desireable place to be and to come to. We’ve been working on this for 15 years now, and still believe the Capri can bring back the liveliness. We call it bringing up the lights on Broadway.“

The expansion is necessary for their programming, but also the rest of the block is critical, Long said. “To have that empty sends a dismal message to the community,” so they are talking with people to try to get a restaurant to locate in a new development there. The city issued a request for proposals last year but got no takers, and it’s unclear when and how they will try again. Long concluded, “We want to get people on board with working with the city. We want to do our part and help others do theirs. Part of our deliberateness is we want to be unified, not just do our thing and hope something else happens.”