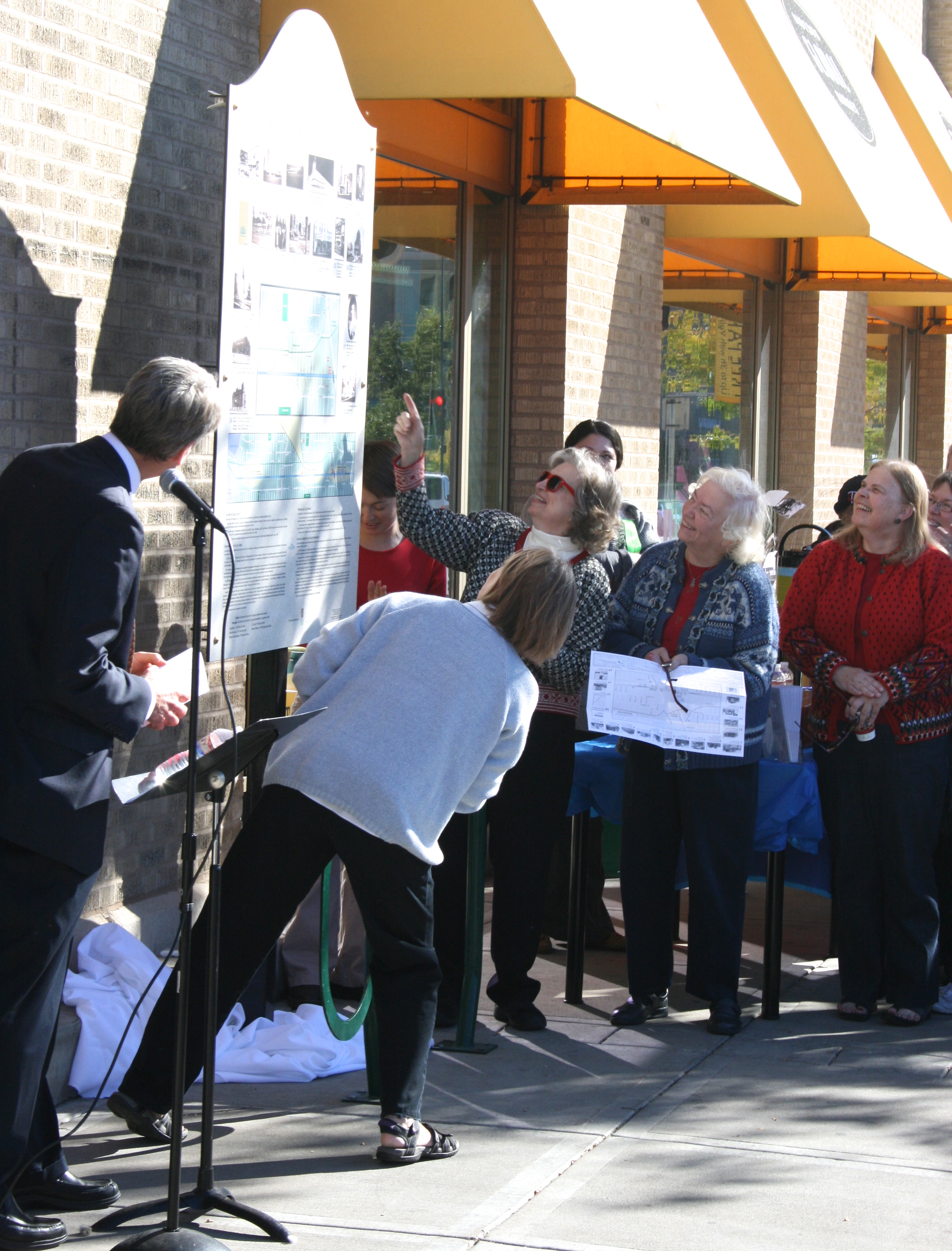 Mayor Rybak and Julie Ingebretsen, among those viewing the unveiled plaque

The September 25 unveiling of Lake Street’s Museum in the Streets at Midtown Exchange celebrated all of the hard work that went into the project. The ceremony also acknowledged the historical and cultural significance of the six-mile corridor that links Minneapolis to St. Paul. Minneapolis Mayor R.T. Rybak noted that Lake Street connects 14 diverse neighborhoods, and has long been a place where immigrants have followed their dreams. Hennepin County Commissioner Gail Dorfman praised the project for giving tribute to everyone who’s been a part of Lake Street over the generations. 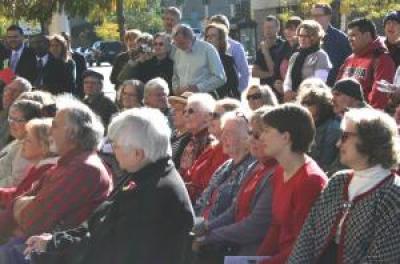 Some of many onlookers

Other dignitaries were on hand to mark the occasion, including Hennepin County Commissioner Peter McLaughlin. Sharing the limelight were sponsors of the $140,000 project, including Wells Fargo, the Longfellow Community Council, and Ingebretsens. Two sponosrs, Lunds and Peace Coffee, provided refreshments. A representative of the Minnesota Historical Society, which provided two grants through the Minnesota Historical and Cultural Grants Program, also spoke.

Joyce Wisdom and the unveiled plaque

The star of the hour was Lake Street Council executive director Joyce Wisdom. It was Wisdom who hatched the idea for a Museum in the Streets project while on a trip to Connecticut in 2009. Always looking for something to bring back from her travels, this idea really drew her in. She connected with Patrick Cardon, founder and director of Museums in the Streets, and began pulling together funding.

Now, 60 bilinugal plaques with text in English and Spanish have been installed along the commercial stretch, forming three walking tours. To the west there’s an Uptown tour. Heading east there’s a Midtown tour, with Midtown Exchange, a focal point. Then, east of Hiawatha is a tour that reflects Lake Street’s more industrial past. Each tour features one large panel and approximately 20 smaller ones.

The Lake Street project stands out, not only as the first midwestern Museum in the Streets endeavor, but also as the most urban of the two dozen completed projects. To date, all of the other Museums in the Streets have been located in cities and towns along the East Coast or in Europe. Of 13 in the U.S., nine are in Maine, two in Connecticut, and one in New York. Except for one in Italy, the 11 in Europe are in France.

Wisdom, Cara Letofsky, and others who worked on the project, noted its value. Photos long stowed away in boxes and drawers, and stories that have remained primarily in family’s memories, have now been made public, given a place along Lake Street. Public installations are also a more accessible way of sharing history with the wider community than through a book or by archival repository.

Wisdom expressed delight in seeing people reading the plaques. More than once, while driving down Lake, she’s pulled over, gotten out of her car, and struck up a conversation. It’s something she can expect to do a lot more of in days and years to come.