In the morning we walked in groups of five for about 30-45 minutes through our area of Kabul en route to our morning activity. I awoke at 4 AM to use the bathroom and when the call to prayer was broadcast from the nearby mosque about 40 minutes later, I knew it was time to get up because the dogs on the street also joined the chorus. The city is fairly dirty (what does one expect in one of the poorest countries in the world which is at war with the world’s largest military machines?) and the traffic has no street lights or road striping so the cars switch invisible lanes as the pedestrians dodge and move between them.

Vendors crowd the sidewalk selling fruit, live chickens, freshly butchered meat, nuts, beans, and a multitude of other items. We travel in groups of 4 or 5 – always escorted by one of the Afghan Youth Peace Volunteers. I know I shouldn’t have favorites – they are all so wonderful and helpful – but I can’t help but respond most to 13 year-old Gholami, the youngest and smallest of the 8 who have joined us for several days. We walk in small groups so we blend in a little more than if we all walk together. About half of the International Peace Delegation is staying at a hotel, others of us are sleeping on the floor in the office building of a non-profit organization that has joined with AYPV in inviting us. After walking down two main streets, we branch off into what seems to be a side street which more resembles an alley with an open sewer/gutter on one side. As cars or trucks pass us they blow their horns so we can step aside.

Vans come by with other delegates from the hotel and we are offered rides but Simon and I prefer to walk with several of the boys, enjoying the sunshine and “fresh air”. Actually, the air is often quite polluted with fumes from older, untuned vehicles. We walk purposefully and deliberately so as to not draw undue attention, despite our pale complexions. (Simon, from Australia, is fairer-skinned than me.) Since most of the others arrived before us, we missed part of the presentation at the private school which was our destination.

Lena, the teacher who addressed our group at the school, was a young woman who described the school and answered our questions. We had “one cup of tea” (we could have had more if we wished – even 3 Cups of Tea) but were told what Afghanistan needs is not more money to build schools but rather to have teachers properly trained. Having school buildings does no good without trained teachers. And teachers have to be paid a wage they can live with. The public school teachers are not paid enough and often have class sizes of 50-70 students – an impossible situation to help students learn at the grade school level. This private school had 20-25 students per class and it appeared to me at the recess time that the predominance was girls at this school.

When asked about whether the US military is needed for security, both the school’s principal and the teacher quickly said they wanted the US troops to leave. Lena added that “we need to make peace by ourselves” – it is not something that can be imposed from the outside. She continued, “Instead of waging war [here], the US could concentrate on education instead”, using the incredible amounts of money to train teachers.

The AYPV had picked this school for the tree-planting opportunity as a way to symbolically celebrate the New Year which would begin two days hence on the first day of Spring. Afghans are about to begin Year 1390 – their calendar, like that it many other Muslim-dominated nations, is dated from the time of their Prophet Mohammad. Students at the school drew or painted pictures of trees as an art project to celebrate the tree-planting event in their schoolyard. 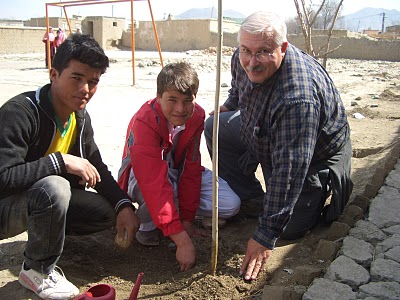 Before we moved to the schoolyard to plant the trees, Hakim and the AYPV boys recited a poem they wrote the night before, “We Need a Different Tree” – a moving statement of choosing peace over war. It lamented how “power and privilege oppress the people – it is perfected in war. … Why would an Afghan mother want a tree that kills? … War is not a tree we want to plant – so, if we wish to live without war, we need to plant a different tree.” 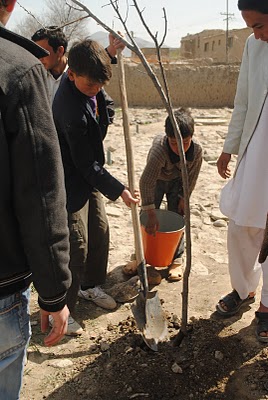 Then 55 trees, almond, poplar, plum, apricot, and apple, were placed in the already-dug holes provided. A local man pruned them after they were planted and watered. As we finished, the children were let out of the classrooms for recess/exercise and they were enamored at the visitors to their school; some loved posing for photos, other avoided our cameras.

The school principal announced that the garden/schoolyard would be re-named “The Friendship Garden.”

The van ride back to our office space -like all rides in the Kabul traffic – was another adventure. Just when you think the driver will hit a bike rider or pedestrian, scrape an on-coming car or one that you are passing, the brakes are applied or the steering wheel turned to prevent the accident. Any insurance agency would have to be crazy to cover someone for collision -although I don’t seem much beyond very close calls. It makes rush hour in the Twin Cities look positively relaxing.

Next on the day’s list (after a light lunch) was to drive to the Emergency Medical Hospital for civilian war casualties operated by an Italian NGO to donate our blood. (Ironically, I was told in Minneapolis before I left that I will not be able to donate platelets for a full year if I travel to Afghanistan due to threat of malaria – even though the threat doesn’t arrive until May, long after I’ve left.) My group had some difficulty getting a taxi to the hospital so we missed most of the tour and discovered that they only needed O negative blood that day. Two of us met that requirement but Kathy, who was one of the two, was asked to wait a couple of weeks since she gave at that hospital only several weeks before. She will donate again before she returns to Chicago in a couple of weeks.

Returning to the office, we had a convoy of 5 huge armored tan vehicles of the International Security Assistance Forces (ISAF) pass us. Even though there were no US markings, it is clear to everyone who is in sight that these behemoths are the dinosaurs of the crumbling American empire – unfortunately still very deadly in its decline.

Later in the afternoon, we walked to the 3rd Eye Photojournalism Center, the host organization for the candlelight vigil in remembrance of the victims of war. A stunning gallery of wonderful photos taken from all over Afghanistan graced the walls of the four rooms and a table with candles encircling a banner reading “For the War’s Victims” in both English and Dari. After a few moving talks and the reading of the names of the 7 boys who were killed earlier this month in one of the northern provinces, the AYPV boys lit candles and passed them to all of us and we observed 2 minutes of silence in memory of all of war’s victims. Many of us felt tears welling up knowing that two of the boys present had lost their father to the Taliban several years ago. I am amazed at their courage and commitment. 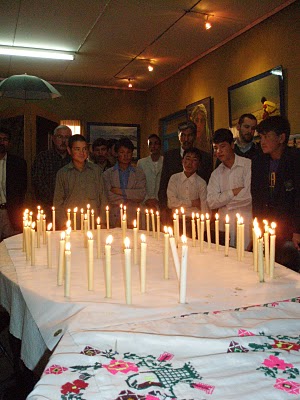 At dinner afterward, I had a great conversation with Zahra, yesterday’s moving speaker from the Open Society, deeply moved by this 23 year old women who refuses to wear the veil except when she is outdoors. She has many questions for me – why I came here, what do I think about Afghanistan, what other Americans think about the war, … . I’m sure we will have several more conversations before our week’s end.

Having gotten up before dawn, I was very grateful for the air mattress and sleeping bag at 9 PM. I am so grateful for so many friends who have supported me/us on this pilgrimage/journey for peace.