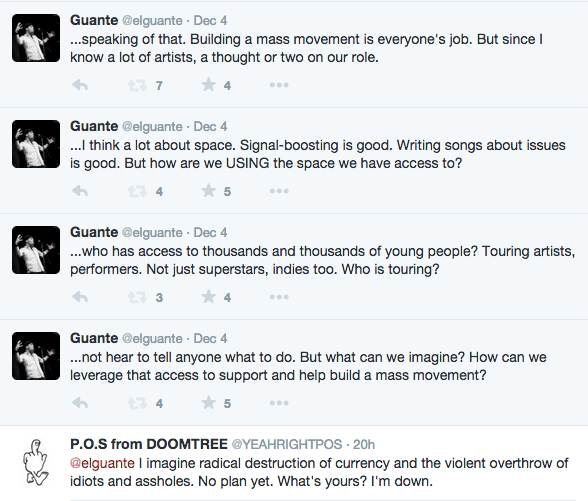 That’s a good question. Let’s plan. Whether the end-goal is overthrowing capitalism and abolishing the police, or just getting more progressive people elected to office, the medium-term goal is the same: building a mass movement.

Like I say in one of those tweets, building a mass movement is everyone’s job, and everyone has to figure out how best to leverage their strengths, passions, resources, access, etc. to contribute to the larger struggle. I think of teachers calling audibles in their lesson plans in order to talk about current events. I think of religious leaders doing the same thing during their sermons. I think of workers organizing anti-oppression committees or even just book clubs in their workplaces. I think of athletes wearing #blacklivesmatter shirts. I think of online communities. I think of students. I think of young people. Everyone has some kind of power or access to space that can help this movement grow.

And for artists, I see a lot of potential. I’m not really interested in the “you have a platform so you HAVE to speak out” argument. For me, it’s more a matter of “you have a platform, so why not speak out?” Whether or not it is our responsibility, it is definitely an opportunity. Especially for touring artists– poets, MCs, bands, etc.– that have the privilege of regularly being up in front of thousands of people all over the country; that’s a platform with enormous potential.

Even beyond the geography, artists have the power to reach individuals who may have zero interest in activism or social justice. When I see five hundred (mostly young, mostly white) kids at a rap show, chanting along to anti-authoritarian lyrics, I see potential. The simple act of standing on a stage and challenging an audience to think critically is a good thing. It is the planting of a seed.

But I’ve been thinking a lot lately about the difference between planting wildflowers and planting crops.

As artists, it’s easy to plant seeds. If I play a hundred shows, and I know that my material is social justice-oriented, or even just critical thinking-oriented, I know that I’m doing something good. I know that listeners will take these ideas and engage with them in whatever way makes sense to them.

But I think the question isn’t “is what I’m doing good?” The question is “is what I’m doing as good/powerful/transformative as it could be?” I obviously don’t have all the answers, but I am challenging myself to do better. Here are a few practical ideas for transforming artistic space into activist space; this is just where my head has been at lately– please add other ideas or thoughts in the comments:

1. Connecting the Audience to Concrete Actions and Organizations

One of the first steps, for me, is demystifying the idea of activism. You don’t have to a brilliant anarchist mastermind with a black bandana over your face to get involved. You do have to show up, though, and I think one obstacle to building a mass movement is that a lot of people just don’t know where or how to show up. Rage is valuable. Critique is valuable. Raising awareness is valuable. But we can do more. A few ideas:

2. Breaking Out of the “Shut Up and Play” Mentality

You can do a lot with an hour of stage time. Most of us (including myself, for 90% of my career) just perform for an hour, maybe with some awkward banter between songs/poems. But what else can we do?

This may be easier for spoken-word poets, who more often perform in spaces that lend themselves to facilitated discussions or interactive stuff, but I think this is a good thing for all artists to at least think about. Some of the most rewarding experiences I’ve had on stage have been when I’ve decided to not just do my ten best songs or whatever and really try to connect to the audience, to have a conversation, to do something together beyond “look at me for an hour because I’m great.”

At one show, we took a big chalkboard and I asked audience members to write down actions they could take regarding police brutality and the prison-industrial complex. This was during those twenty minutes at every show between the listed start-time and the actual start-time. By the time we did start the show, the board was full of ideas: 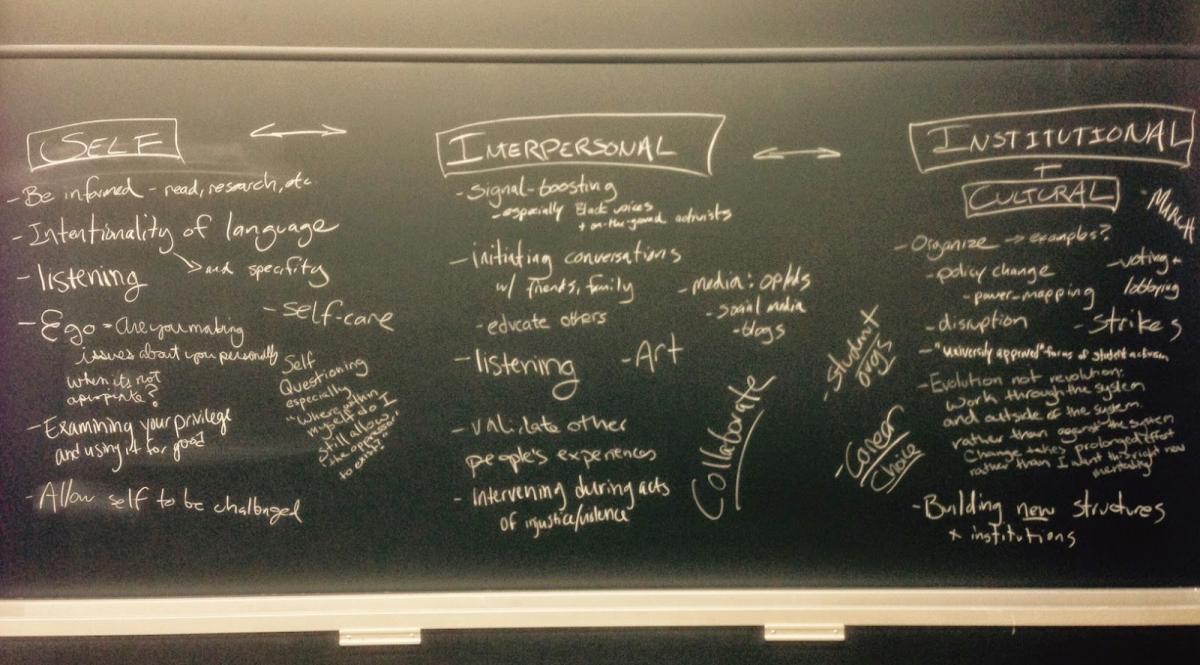 I’m not saying that that’s the most transformative thing you can do on stage, but I think it is an example of how breaking the fourth wall and being more interactive can really add to the power of an event. Have a discussion. Play a short video. Stage theatrical disruptions. Be creative. We frown upon teachers who just lecture for an hour straight; I think we can hold performing artists to a similar standard.

3. Taking Signal-Boosting to the Next Level

Retweeting people who know what they’re talking about is good. Posting links to articles we think people should read is good. But I think a lot of this is done haphazardly– we happen to see something, and then happen to RT it.

I think there’s room for more intentionality here. And it doesn’t have to be any revolutionary reframing of how we do social media, just a little extra thought. A few tactics:

There are weeks when I don’t post anything self-promotional. Just links and resources. And yeah, I lose some followers who aren’t trying to hear that stuff, but I gain more. This isn’t just altruism. Especially with how Facebook’s algorithm works today (explicitly self-promotional posts are more likely to stay invisible to fans); posting about current events and struggles just makes sense.

A Million Other Ideas

Admittedly, these are pretty surface-level actions. There is even more room for arts spaces to be fully integrated into activist movements, and for artists to plug in in ways that are even more intentional and focused. But I think it starts here, thinking about space. Reclaiming space. Transforming space. Leveraging access to space.

I also think it’s hard to have a general conversation, since there are so many different approaches to practicing art. What works for some people won’t work for others. What is effective for an artist who holds one identity may not make sense for an artist who doesn’t hold that same identity, or live in that same community, or have access to that same fanbase. But there is always something that works. Beginning to think more strategically is a first step.

We all plant seeds, and that’s good work. But while wildflowers are beautiful, crops are revolutionary. Art, by itself, cannot change the world. But art, as one element of a mass movement, absolutely can. Feel free to add more thoughts or ideas in the comments.