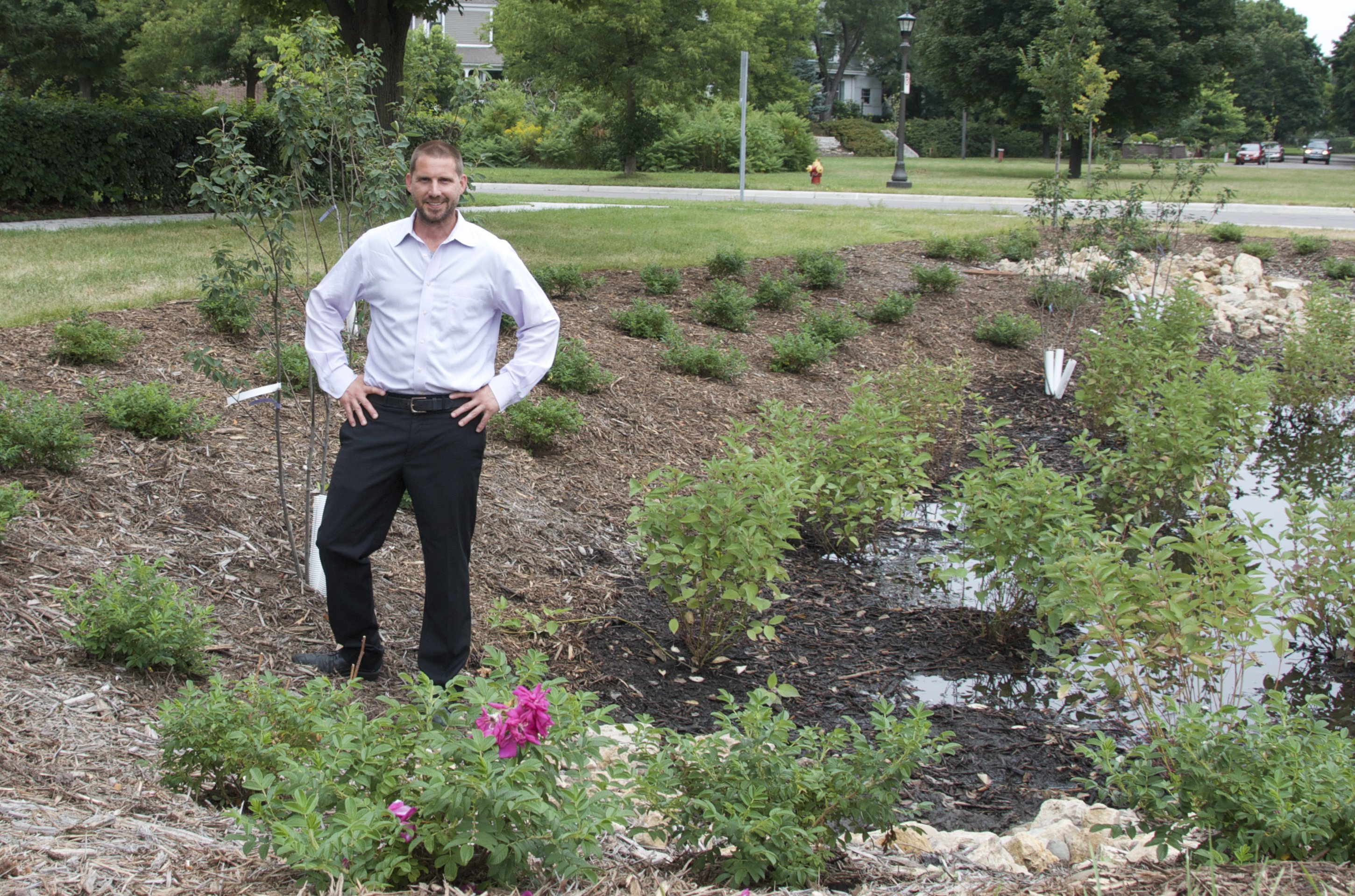 When it comes to improving the beauty and environmental friendliness of any neighborhood, there’s no better way to get things done and done in the right way than through the power and initiative of those who live there.

He, along with a group of 8 other St. Anthony Park residents worked sun up to sun down over three days in August to caringly weed, cultivate and plant 16 rain gardens with more than 1,600 pollinator-friendly plants along Raymond Avenue between Hampden and Ellis Aves.

“We’ve eliminated one acre of hardcover or impervious (pavement) and converted it to green space….and then on top of that we’ve added 16 rain gardens. It’s just a huge water quality improvement initiative,” Mastey says.

The story of the transformation along Raymond Ave. neighbors witnessed in the last year actually began almost a decade ago when a group of concerned neighbors began advocating for improvements to Raymond Ave. that would make it safer and easier for pedestrians to traverse.

After years of negotiations and dealings at the city, county, state and even national level, the neighborhood saw the first fruits of these volunteers’ labors last fall when Raymond Ave between University and Hampden reopened with bike lanes, bump-outs, grassy medians and other pedestrian-friendly amenities.

Quick to recognize an opportunity, Mastey advocated for the inclusion of improved green space and the addition of rain gardens to the city’s early plans for Raymond Avenue. Like many things in city planning, this was no simple task, but through the sustained work of Mastey and the rest of the SAPCC Environment Committee, plans were eventually amended to replace one acre of impervious ground cover with new green space that included an expansion of Hampden Park (along with a new underground storm water system) and new lawn space at several of the intersections along Raymond Ave.

Why have lawn where you could have rain gardens, though? In addition to the added beautification qualities of a planted rain garden, they also clean rainwater runoff more efficiently than lawn, which keeps more pollution out of the Mississippi River and other vital waterways.

“If we wouldn’t have stepped up to the plate and said ‘hey, let’s do some plantings in here, they would have just done lawn,” Mastey says.

The Capitol Region Watershed District, which supplied the plants for the rain gardens, deserves praise, as well, Mastey says.

A landscape architect by trade, Mastey took the plans a step further for the environment and ensured every plant that was to be included in the rain gardens would also provide pollinator insects like bees and butterflies with a steady source of pollen throughout the season.

“One of the things we really looked at in addition to beautification and civic value, was wildlife and specifically, pollinators,” Mastey says. “Every plant that we planted is a huge pollinator plant.”

Knowing volunteers would be responsible for the maintenance and upkeep of the rain gardens, Mastey chose only three types of plants for the largest two gardens. The Autumn Brilliance Service Berry Trees provide sustenance for pollinators early in the season along with the Isanti Dogwood Shrubs, and the Purple Pavement roses bloom and re-bloom throughout the middle of summer and into the fall.

By complimenting these plantings with six other varieties of pollinator plants in the smaller rain gardens along the avenue, various insects that play vital roles in the health of our environment and support our biosystems will enjoy a bountiful new Raymond Avenue for years to come.

It’s not just insects that will enjoy the new plantings, either. Mastey says pheasants and wild turkeys are known to eat the rosehips and 38 different species of neo-tropical migrant songbirds enjoy the Service Berries.

The next time you’re out and about on Raymond Avenue, take a moment to stop and smell the roses. When you see a pollinator insect or interesting bird, take note. Appreciate that far less pollution now makes its way to the Mississippi River from Raymond Avenue. None of this would have been possible without the dedication and investment of some extraordinary neighborhood volunteers.