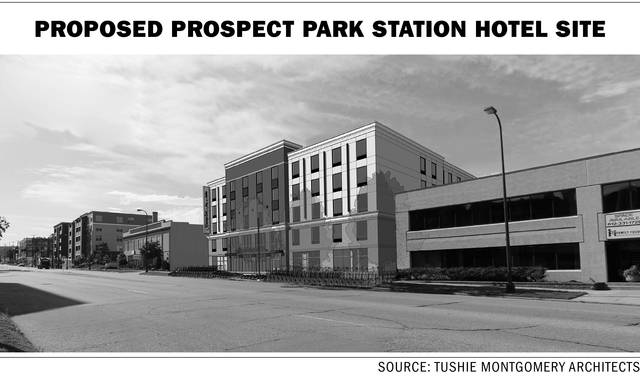 Just down the road from TCF Bank Stadium, a new five-story hotel may find its home seated alongside the Green Line light rail in a neighborhood near the University of Minnesota.

Plans for a new 117-room hotel in the Prospect Park neighborhood went before a Minneapolis committee Thursday. Some city officials and nearby businesses say they support the project, as it could bring businesses and people to the growing area.

Jeff Barnhart, who owns the property with his father and uncle, presented the preliminary plans for the new hotel — which may become a Hampton Inn and Suites — before the city’s Planning Commission Committee of the Whole last week, seeking guidance on the plans.

The Barnhart family owns a second property adjacent to the hotel site, which they also requested to rezone. They plan to expand the hotel to the second lot if the initial hotel is successful, Barnhart said.

The committee welcomed the request to rezone both properties and make the hotel five stories.

Carl Kaeding, owner of the Kaeding Management Group, the property’s developer, said he was content with the committee members’ receptive response.

“The major [plans] we need for the project to work, they were very open to,” Kaeding said. “I think there’s a significant demand for some new hotel product in this area; I think it’s a good location for it.”

The property formerly housed a deli, a day care center and an auto body shop before a fire destroyed the building last summer.

Dick Brownlee, the chair of Prospect Park East River Road Improvement Association’s Zoning and Project Review Committee said the group is working with Barnhart to ensure the hotel reflects the neighborhood’s plan for the area.

But despite the support, the developer still needs to submit an official application to rezone the property and the City Council will need to approve the plans.

Ward 2 City Councilman Cam Gordon, who represents Prospect Park and neighborhoods around the University, said he supports the plan, adding that it fits nicely with the recent addition of the light rail.

“I also think it’s going to help us take better advantage of this big investment that we just made as a community into the Green Line and the light rail station there,” he said.

Local business owners are also on board with adding another hotel in the area.

Debi Grant-Smith, the general manager of the Days Hotel located at 2407 University Ave. SE, said she supports the new project.

He said the steady traffic in the area from the University and its nearby hospitals and clinics made it an easy decision to construct a hotel.

“There’s still a lot of people that come to the U of M that go stay downtown … because of the rooms, but the room rates are really high, so that will just bring the people closer,” he said.