This area near the intersection of Penn and Broadway in North Minneapolis is one spot the city is considering for a Bike Walk Center. Photo by Karen Hollish.

Amid widespread business cutbacks, layoffs and closures, the city is offering entrepreneurs a rare opportunity: Come up with a winning plan to start a bike shop in North Minneapolis, and we’ll give you up to $350,000 to get it started.

A small number of people attended a September 21 meeting about the project, and some expressed concerns about lack of consultation with the black community in North Minneapolis. But the so-called “Bike Walk Center” has to materialize quickly, as the money comes from the federal American Recovery and Reinvestment Act of 2009, said Patty Bowler, director of Policy and Community Programs for the Department of Health and Family Support.

“Like all stimulus efforts, it’s shovel-ready — or bike-ready — so we have to make things happen very fast,” Bowler said Tuesday at North Regional Library.

The department’s Request for Proposals, which opened on September 15,  will close October 27. The department wants to enter into a contract with an operator by January 1, 2011 and see the center open no later than October 1 of next year.

The project is part of the city’s Communities Putting Prevention to Work grant, which has a number-one goal of decreasing obesity (and which already helped fund the city’s Nice Ride program). For this project the city wants to focus on helping its most overweight, under-active and poorly nourished citizens — and there’s a disproportionate number of them in North Minneapolis, Bowler said.

North Minneapolis also represents a “Bike Shop Dead Zone,” according to the RFP. With the exception of a grassroots, small-scale experiment supported by the Redeemer Center for Life, or other do-it-yourself bike mechanics based in home garages, there’s no full-service shop where Northside residents can purchase bikes or have them repaired.

Besides bicycles and related products, the center will sell “pedestrian goods” like transit passes, compact carts and reusable shopping bags. The center is expected to offer programming and resources that will encourage residents to bike and walk more, and its operator could also sell healthy foods.

Applicants are expected to have control of their proposed site, which should be nearly 5,000 square feet in size. It must also be located in one of the commercial corridors or nodes identified on the city map, below. 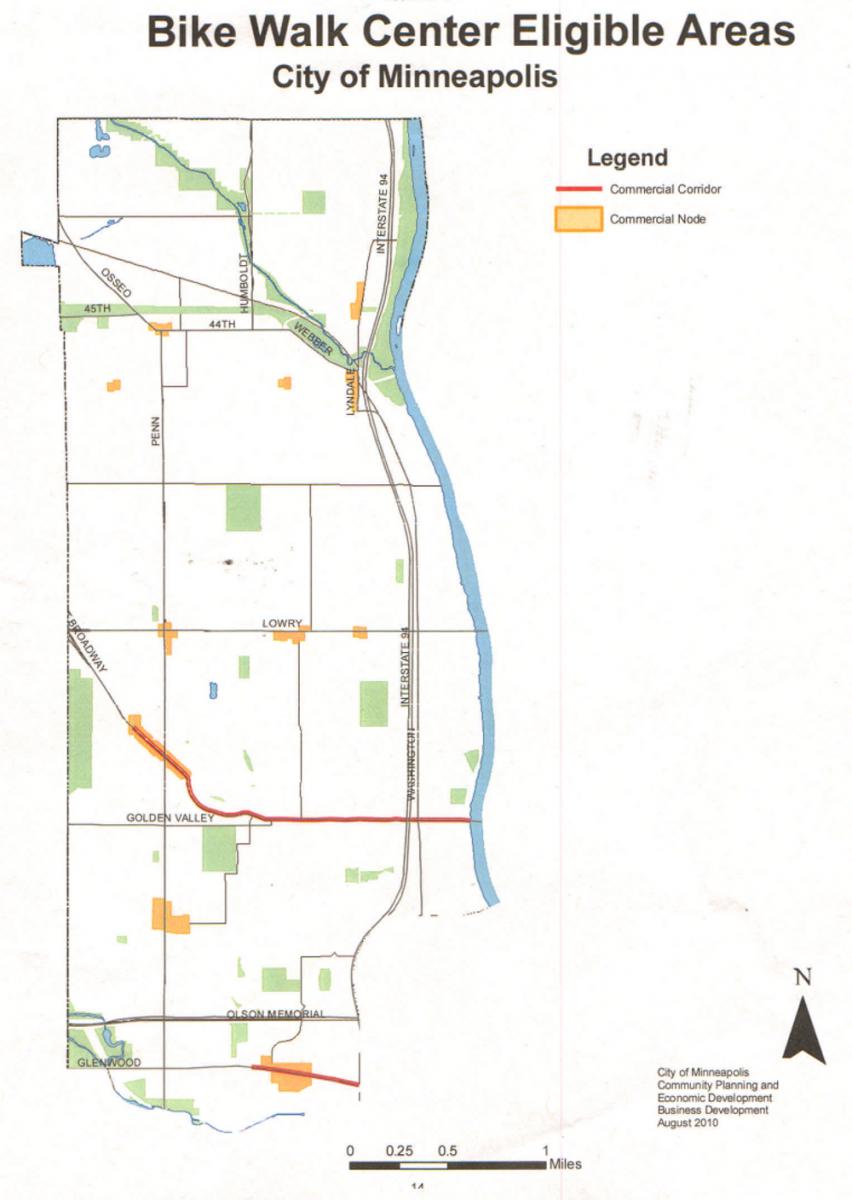 The city’s funding share is set to run out in March 2012, after which the Bike Walk Center will have to be successful enough to keep going on its own. Principal Project Planner Erik Hansen, of the city’s Economic Development Division, estimated it will have to garner between $400,000 and $600,000 in gross annual sales to cover its operating expenses.

A nationwide statistic in the RFP sets forth what some see as this project’s major challenge: “According to the National Sporting Goods Association, a majority of the bicycle buyers in 2009 were well-educated, affluent, white males.”

“OK, now for the important question,” boomed Louis Moore, president of the Major Taylor Bicycling Club, a local organization of African American cyclists. “What kind of contact has the city made with the black community of North Minneapolis?”

The city’s answer? Not very much.

Prevention Specialist Kristin Klinger said grant applicants are expected to court the Northside community’s support. The successful applicant, she said, will convince the city it can connect with the neighborhood’s diverse population.

Other meeting attendants, like Jamie McDonald of Sunrise Cyclery, raised concerns about the site’s proposed size.

Marilu Thomas, executive director of the Redeemer Center for Life, raised questions about both matters in an email.

“We are concerned that the RFP will not really address the youth and health concerns on the Northside because it is written in such a way that only one main proposal will make it through the gauntlet of 5000 sq feet, in a commercial corridor, making at least $500,000 the first year in sales — and that is the Pohlad Foundation,” she said, referring to the philanthropic Pohlad Family Foundation, which also sent representatives to Tuesday’s pre-proposal meeting.

“(I’m) not sure how that will really get the community involved in changing the environment,” Thomas continued, “since we heard that the community has not really been surveyed or consulted on whether this center will do that.”

Despite these concerns, the city will be moving ahead with its RFP process. It is expected to make a decision about who could best run the center by mid-December.

“It really comes down to an entrepreneur,” Project Coordinator Erik Hansen said. “It’s a lot of money, and it’s a once-in-a-lifetime opportunity.”