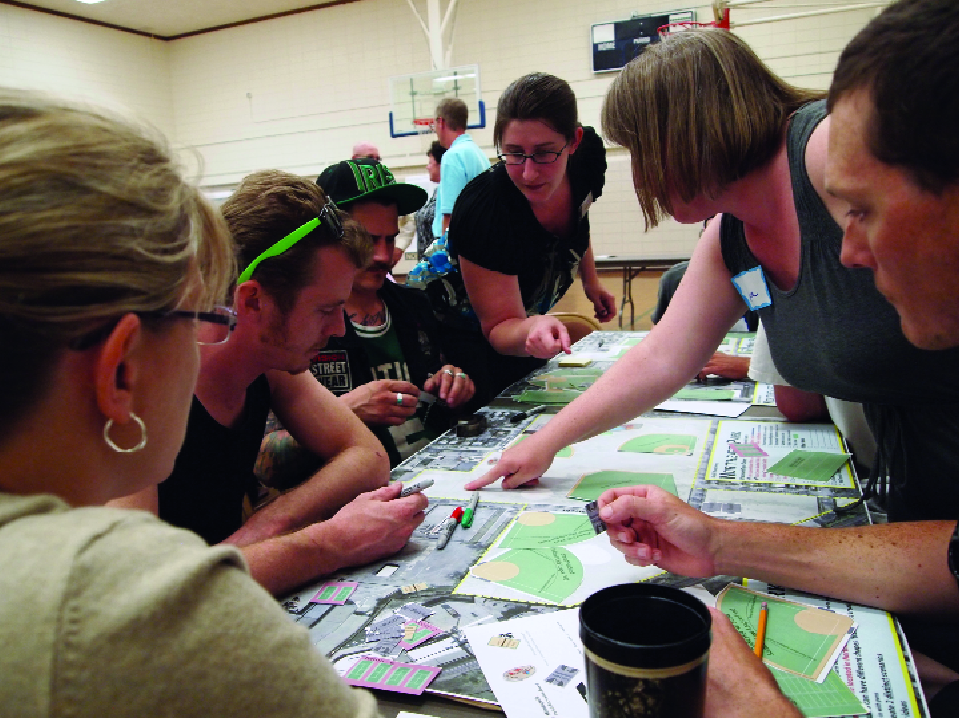 Kristin Petersen (in glasses), a nearby resident on the Community Advisory Committee, helped orient others to the Northeast Park map. Several tables of people, with the help of advisory committee members and architects from Hoisington Kegler Group Inc., each drew two different plans trying to address all the space needs. They presented the plans and their reasoning, then the professionals took the next two days to refine them into five possibilities for further comment. (Photos by Margo Ashmore)

What do you get when you let community people and architects loose with a kit of paper parts, maps, and an hour or so to put them together? Twelve ideas for a new Northeast Park, and a lot of discussion about how these ideas and parts might work with what’s already there between Polk and Johnson from 16th to 13th avenues NE.

Add two more days intense work by the architects, and five different approaches emerge, incorporating the best ideas, brought back for more critique. While three of those seemed to rise to the top, at the Saturday, Aug. 3 meeting on the subject only about half of the Community Advisory Committee (CAC) members were present, so they didn’t vote.

They hope to have at it again next in September or early October, with a final meeting in November at the latest, with Minneapolis Park and Recreation Board (MPRB) consideration also in November. CAC chair Doron Clark emphasized that at every meeting, there would be opportunity for public input. The meeting format has the CAC getting their questions answered and comments made first, and then a queue of “peanut gallery” questions and comments. For the last two meetings, July 31 and Aug. 3, it worked well. About 40 of the general public attended on the 31st, and many came and went, fewer stayed on the 3rd.

Recently, the park board vacated the building at the park that they had shared with the Minneapolis Public Schools when it was Putnam School. The new owner, a corporation renting to Yinghua Academy, is expanding that building. There had been frictions over use of gyms and playgrounds, with community members feeling they didn’t have access to what should be public facilities. That area is near the top of the current map, ball fields and open areas are to the south, and west of Fillmore at about what would be 15th Avenue. The water park is along Johnson Street between 16th and 13th.

MPRB has $4.1 million to work with for a new rec center building, and about $1.5 million for grounds. Manager of Public Engagement and Citywide Planning Jennifer Ringold reminded the group to consider this a master plan that could be done in stages as additional monies come available. Some residents emphasized in casual conversation that the park still has to work as built with the current funds, as it may be a long time if funds get diverted to other projects; they’ve seen it happen with other projects in the past.

The instructions allowed removing the “underused” splash pad area at Jim Lupient Water Park and placing the rec center there to serve dual purposes. The relatively new mini-golf area and horseshoe areas are also considered underused and expendable, though at least one CAC member questioned taking out any recent investment.

A strong city-wide skate-boarding contingent advocated for a skate park that would function better than anything currently in the area (they don’t like the setup at Bottineau). They said they would be willing to put on fundraisers to help.

Tournament-holders said they like the “pinwheel” layout of four adult softball/youth baseball fields with their home plates clumped in the middle. Janet Arones has played league softball “all my life” and said having the backstops close together makes it easy if they have to change fields. Park staff said it’s also a better vantage point for spectators. Other than Cyson Field, there are no bleachers at the existing park.

Some of the designs were set up as pinwheels. Others had overlapping outfields with home plates at the outer corners. Some were overlaid with multi-use fields where, for example, by striping and goal placement, a football field becomes a soccer field. 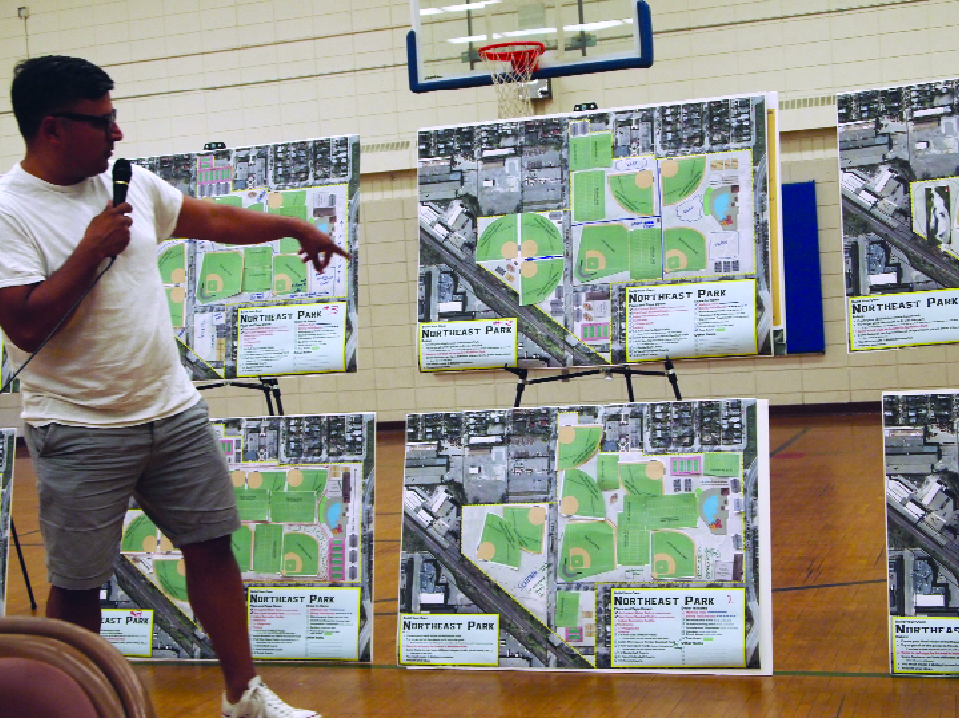 “The number one complaint people have with the park board is about field maintenance,” said Bernie Kunza, approving of an option, Number 2, that minimized overlapping uses. Oft-used turf wears down and has to either rest and be renovated, or the play is on dirt. The possibility of artificial turf has been raised wherever there’s the opportunity to also fence the particular field.

Ringold complimented the CAC members for being “real good at asking tough questions and balancing capital, operating and program concerns.”

New playground equipment funding probably won’t be available until 2018 for building in 2019, and what’s there still has some useful life in it. But Ringold cautioned the group to not necessarily let the $300,000 play equipment dictate where the $4.1 million building should go. A resident who uses the park every day said it would not be good to take out the existing playground (near the school) until the new one is available.

In casual discussion, residents were heard saying that there should be no reason to site the playground convenient to Yinghua. Others talked about traffic circulation and thinking about street modifications to minimize the morning and afternoon traffic of buses and parents’ cars’ impact on the neighborhood. A couple of people mentioned that the city should be asked to do a traffic study before any more parking would be added for Northeast Park.

Most people asked for strong north-south paths and other circulation for pedestrians and bikes, trees for shade especially where parents watch children play, more picnic grills and an actual pavilion for picnicking in the event of rain. They also wanted at least one additional building with rest rooms separate from the recreation center, serving the ball fields, for example. Concession refreshments might be situated in the same building.

Park staff request a maintenance building and yard to hold the dirt and other products needed to renew these fields (and others throughout Northeast and North Minneapolis), the “Cushmans” (maintenance vehicles/carts) and minimal office functions.

One plan showed a dog park. Some had sand volleyball courts.

On involvement, at the July 31 meeting, Clark asked the group to list “which user groups do we need to hear more from?” Answers included youth and teens, Somali, anyone affected by these meetings being during Ramadan, Latino who have a lot of informal soccer games, seniors, religious organizations. One person asked if Edison High School is represented—they do have two coaches and the athletic director on the CAC.

“How about the neighbors in the Northeast Park neighborhood?” said one who felt that the CAC did not include enough voices from the immediate neighbors with just one representative, and “had not been asked for my opinion except for the survey.”

The website for the project, where all meeting documents will be posted, is www.minneapolisparks.org/currentprojects (click on Northeast Park master plan).