On June 14th, the Central Corridor “Green Line” Light Rail project will open, ushering in a new era in transit for the Twin Cities metropolitan area.

The Met Council has tallied at least $2.5 billion in development, including 121 new construction and redevelopment projects planned, under construction or completed within a half-mile of the $957 million line.

But the long term effect of light rail on low income communities along the route is still open to debate.

St. Paul and Ramsey County officials gathered recently at a meeting of the St. Paul Chamber of Commerce to talk with business leaders about development changes that are underway, and those yet to come.

Rico Morales has a report.  Listen to the audio here. 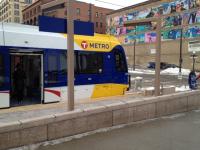