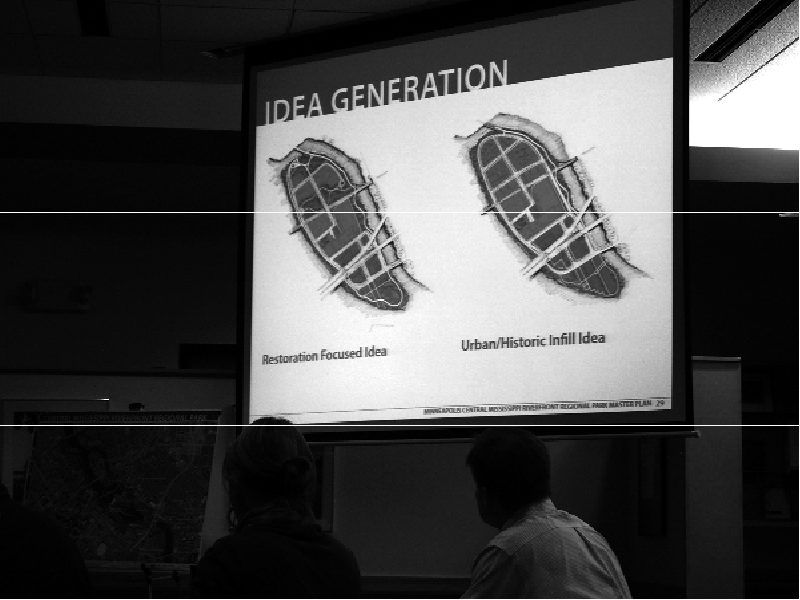 SRF consultants have pointed out the expanse of parking on Nicollet Island visible from the Hennepin Bridge. De La Salle’s parking lot is on the other side. They’ve offered various ways to look at re-organizing the island. (Graphics from a recent SRF presentation)

And this month, they’re turning attention to Boom Island as they work their way up from the I-35W bridge to the Plymouth Avenue bridge. Meeting with a Community Advisory Committee (CAC), they added a Jan. 14 meeting to the schedule with a Jan. 29 CAC meeting. They’re five months into the process and have held design charrettes for Nicollet Island, Main Street SE, and Father Hennepin Bluffs already.

The next charrette sessions will be at the Pavilion, Jan. 22 and 23 in the MPRB Board Room at 2117 West River Road. Typical formats have public input at the start in the morning of the first day, and availability for public feedback on the professionals’ drawings at the end of the second day.

A plan for the “Water Works site” (the former Fuji Ya restaurant) is part of this area, an effort the Minneapolis Parks Foundation backs and received a donation to help plan. The amount of time spent on the Water Works proposal necessitated the extra January meeting, lead consultant Ken Grieshaber of SRF Consulting said.

Let’s listen in on some of the consultants findings and possible scenarios for Nicollet Island presented in mid-December:

Challenges: The Hennepin Avenue Bridge divides Nicollet Island and creates a flyover space. Trail and vehicular connections are unclear. Vegetation, habitat and shoreline edges have degraded. A parking lot used only occasionally is unkempt, road widths are excessive while sidewalks are narrow.

One possible focus, “restoration” restores habitat, especially along the East Channel, and would concentrate and enlarge green space on the ends of the island. Activity would be concentrated around Hennepin Avenue and Merriam Street. Parking and vehicle roads would be reduced.

Another exploration is called “Urban/ Historic Infill” creating destination places along Hennepin Avenue with infill, concentrating activity on the southern portion of the island, re-imagining Power Street with active uses such as art/craft studios, breweries, food and retail, and some residential infill.

The current Pavilion configuration includes an amphitheater area defined by now-rotting timbers installed decades ago. SRF prepared drawings of various ways to make more deliberate connection between the pavilion and the East Channel.

The park board owns the pavilion and leases it to Minntahoe catering, which has it in use more often than before the arrangement. It’s supposed to be open to the public when not specifically booked, but effectively the public gets the message it’s off limits, from some of the signage posted around the facility and a large catering tent blocks the river view. “When events spill out into the tent and onto the terrace, the general public isn’t sure if they should be cutting through there,” Tucker said, “when it should always be obvious that there is public access” along the shoreline.

There were suggestions elevating the area around the Hennepin Bridge to match the bridge level, creating a “lid” of green and/or play/interpretive space atop more concentrated parking, then getting rid of the ersatz parking and reworking the vehicle and pedestrian circulation to the island’s north end.

Another big concept is the “woonerf” developed by the Dutch to take care of storm water through porous pavers. Their configuration gives the impression that vehicles are secondary to pedestrians, while still allowing vehicles. 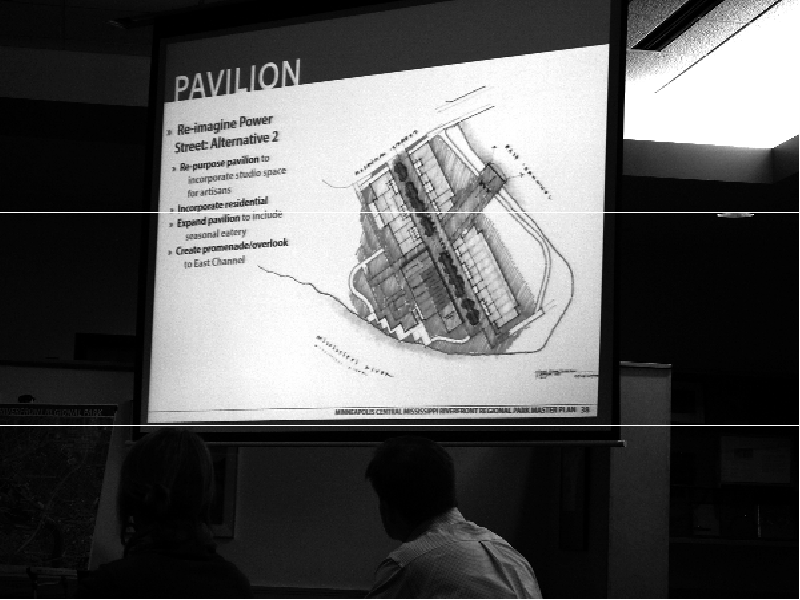 CAC members and others who attended had a smattering of comments about “public vs. private,” regarding the pavilion, and the idea that the island has potential for mixed use while having permanent residents. One of them, Phyllis Kahn, said “we don’t expect privacy, we invite people in.”

Barry Clegg said, “people don’t know how vibrant it used to be” when the island was a center of commerce.

Tucker summed up the themes coming out of the mid-December meeting:

Individuals are encouraged to submit their comments throughout the master plan process. View and fill out a comment card at https://www.surveymonkey.com/s/CentralRiverfront.

Tucker explained that the CAC will eventually approve consultant work, then it goes to the Minneapolis Park and Recreation Board and eventually to the Metropolitan Council. Because the area is considered a regional park, this is an update of their plan; changes rely on their funding or ability to assemble funds. “It’s funded and produced for lots of different kinds of people. We’re to figure out the best areas to have active uses, passive uses, nature, a nod to the industrial history and so on. It’s a lot of different areas to deal with in one project, a lot to bite off. We’re looking for ways to bring it all together.”

The plan should be complete sometime in spring. For more information, the park board planner assigned is Tyler Pederson, tpederson@minneapolisparks.org, 612-499-9084.