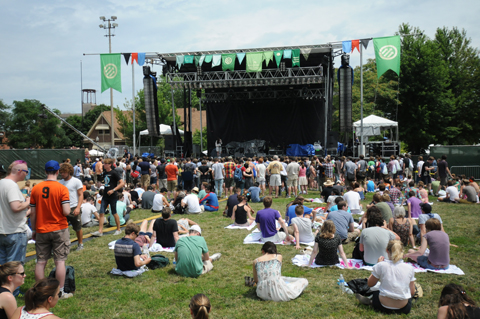 Summertime is for spending time with friends, taking long weekends, and going on trips. It’s a time for basking in the sun, drinking all day, and making impulsive decisions with the intent of keeping the party going longer. It’s also a time for music festivals. If you love music and feel the need to get out of town make this impulsive decision, come to Chicago this weekend and check out the Pitchfork Music Festival.

SoundTown, a major music festival in Somerset, Wisconsin, was just cancelled due to a lack of ticket sales, making attending this year’s Pitchfork an even more attractive option for those wanting to take in several days of live music in the warm summer sun.

When I recount my Pitchfork experiences, I always mention how amazingly manageable the concert is. Chicago’s Union Park is transformed into hipster and yupster central for three days. Bands play across three stages all close enough that you can start watching Cults on the Red Stage and then literally turn 90 degrees and bop across one hundred yards of grass to catch Flying Lotus on the Green Stage.

While I’m not as bullish on the lineup this year as I have been in years past, this year’s Pitchfork has a little bit of everything. Only listen to music that inspired you to buy your first iPod? Feist is the Friday headliner. Are you into “Transcendental Black Metal?” Liturgy, the band that literally wrote the book, or rather this incredible essay, is playing Saturday. Do you spend your time wishing you could hear more Deerhunter? Then you’re in luck you can see the two solo acts birthed out of Deerhunter in Atlas Sound and Lotus Plaza. Are you one of the people that continue reading Pitchfork for their reviews on producers making experimental post-dance music that I, for the life of me, will never understand? Well then you’re in luck because Oneohtrix Point Never will be there making music that I can’t explain.

But seriously, there are lots of great performances to see throughout the weekend. Friday boasts two great emerging bands: the Lower Dens and Purity Ring. Anybody who saw the Lower Dens at the Triple Rock back in March can attest to the fact that their pulsing kraut-rock mixed with roaring guitar swells creates a truly hypnotic live set performance that should be the perfect introduction to the festival on Friday.

Purity Ring have garnered buzz throughout the last year-and-a-half steadily releasing electro singles in the vein of the Knife. As they ready their first full-length album Shrines, released July 24, they’ve become one of the most anticipated and exciting bands of the year. I can’t wait to see how their songs translate to a live show.

In my opinion Saturday’s main attraction is Hot Chip. The English band’s DFA-influenced dance jams are appropriate for any gathering of people just looking to dance. In Our Heads, Hot Chips’ most recent album is also their best collection of music since The Warning came out in 2006. Their performance is the one must-see-performance of the weekend.

This year’s festival may actually be the most attractive to rap fans.  Some of the best and most talked about names in hip hop, A$AP Rocky, Kendrick Lamar, Schoolboy Q, Danny Brown, and Big K.R.I.T., all have performances scattered throughout the weekend. It has been nearly impossible to read about music without coming across a mention of one of these guys. Kendrick Lamar is swagging all over the country Drake, A$AP Rocky is signing huge record deals on the heals of a couple of singles and making JFK inspired videos with Lana Del Rey, and Big K.R.I.T’s Mississippi dirty southern rap style is perfect soundtrack to get the crowd sweaty and dancing on Friday afternoon.

Beyond the music at Pitchfork there are great food trucks from local Chicago vendors, vinyl is for sale, an arcade featuring games inspired by music, large-scale art installations, and there is even a “Book fort” for the literary types that want to escape the hordes of bros sporting vintage NBA jerseys. Another great bonus is that the performances are done by 10pm giving you the entire night to attend one of the after parties or go out on the town until 4 am.

If you’re feeling the itch to get out of town this summer jump in the car or take advantage of a last minute flight to Chicago this weekend. Pitchfork Music Festival is the perfect mix of relaxation, working on your base tan, and treating yourself to great new music. Summer is a time for new experiences, making memories, and finding ways to keep the party going longer. One trip to Pitchfork and you’ll leave thinking that next summer can’t come soon enough.