CHICAGO—As dark storm clouds rolled over the festival grounds on the second day of the Pitchfork Music Festival I made my way over to the Blue Stage to check out Liturgy. Self dubbed as “transcendental black metal,” they were the heaviest band included in this year’s lineup. The band, originally the brainchild of singer-guitarist Hunter Hunt-Hendrix, has spent time as a four-piece, then a three-piece. Walking up to the stage I was disappointed the iteration of Liturgy that I was going to be seeing was just a duo Hendrix: and guitarist Bernard Gann.

The winds whipped up and the skies started spitting, Liturgy’s famous “beat bursts” exploded from a backing track coming from a computer sitting on the ground where I expected to see a drum set. The sample track was aggressive and abrasive—so much that it ended up tripping the breaker, forcing the sound guys to scramble reseting the stage’s power source.

After a few minutes they had moved past the technical problems and the duo took the stage and immediately started their set without saying anything to the crowd. Neither had the look of your stereotypical black metal band member. Rather than being clad in leather and white face make-up, they just seemed like two skinny guys from Brooklyn like you’d see in a comic book store. Hendrix’s growling metal scream, a voice that sounds like a demon being dragged into Hell, doesn’t look natural—or rather, it seems too natural. I asked Hendrix how he produced his voice. “There is just reverb on the vocals,” he said. Shocked by how effortless it seemed, I pressed further. “I don’t know,” he shrugged. “I just open my mouth and that’s how it comes out. You don’t have to strain when it comes naturally.” 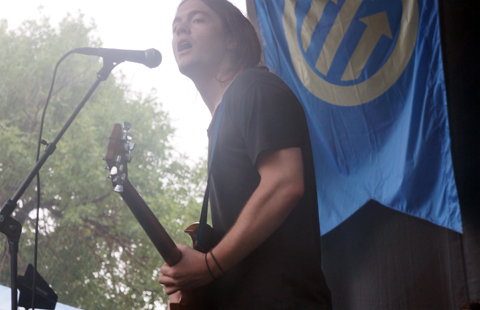 The highlight of Liturgy’s performance was “Generation,” a nearly eight-minute explosion of shredding guitars vacillating between odd time signatures, the two guitar players performing a tightrope act as they improvised together. It was a demonstration of technical skill that anyone at least semi-open to the music would be in awe of. The teenage metal fan in me loved the performance but couldn’t help but feel slighted by the absence of a live drummer. Metal is at its best when you can feel it, when it makes you want to thrash, when the emotion is so visceral you can feel it inside of you squeezing your soul; while still brutal, the use of a backing track just couldn’t deliver that same feeling. 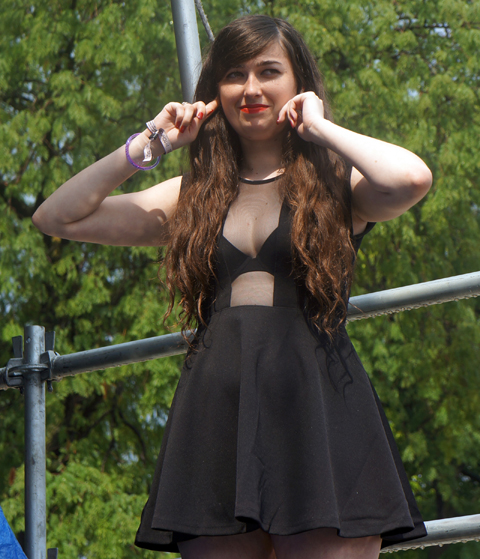 Creating one of the stranger dichotomies of the weekend, I moved from Liturgy to see Cults (above, and below). On paper the bands’ names seem to work perfectly together; however, they are anything but similar. Cults play shimmering Phil-Spector-like pop; indie darling Madeline Follin has a voice that sounds like a bit like children singing, a huge departure from the demonic sounds of Liturgy. The rains had moved out, leaving the field muddy, steam starting to bake off the stage as the band bounced into their first song of the day, “Abducted.” Perhaps it was the wet stage but the duo, backed by supporting musicians, experienced technical difficulties throughout their set, with mics cutting out and the sound quality poor. While they seemed like a great band playing music with a light beat that could make one want to dance in puddles, their performance just never became impressive—it seemed like they could do more but never got there. 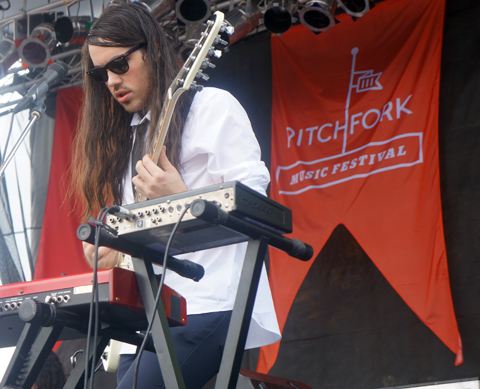 As the day moved into the late afternoon, the sun started to beat down on the crowd and it seemed like everyone was itching for something to start the party. Steven Ellison, the genre-crossing producer known as Flying Lotus, delivered one of the most memorable performances of the weekend. I’ve listened to his albums and read interviews; he comes across as cocky and confident while producing music that while interesting, failed to capture my attention until now. Performing with hype man MC Rage, Flying Lotus started dropping beats all over the sun-drenched crowd. More and more people started running toward the sounds as he mixed in samples from Drake, Portishead, and Kanye. Ellison thumbed his nose at the festival producers, saying “They’re telling me I only get two more songs. Who gives a fuck?!” then stopping the music a couple times at the end of the set, exclaiming “I’m drunk as fuck right now…so yeah…I’m just going to play this.” He played and played, going about ten minutes over his allotted time, his set creating the release that festivalgoers needed. 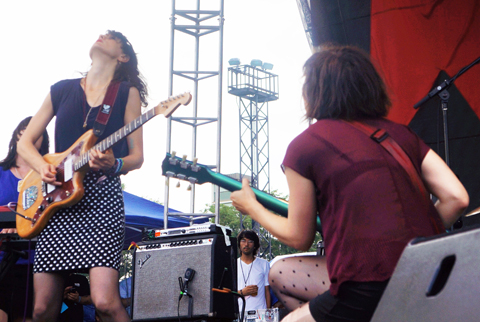 The all-woman four-piece supergroup Wild Flag (above, and below) delivered what should have been expected yet still caught me off guard: one of my favorite performances of the weekend. With years of experience under their belts, they did what you need to do at a festival. They rocked really hard. Jumping across the stage, playing guitar behind their heads, and simply playing with an energy that you could feel if you were at the front of the stage or the watching from the grass on the Jumbotron. Sure, there were hitches in their set, but they rocked through them like the veterans that they are, delivering a set that was the most enjoyable performance of the festival to that point. 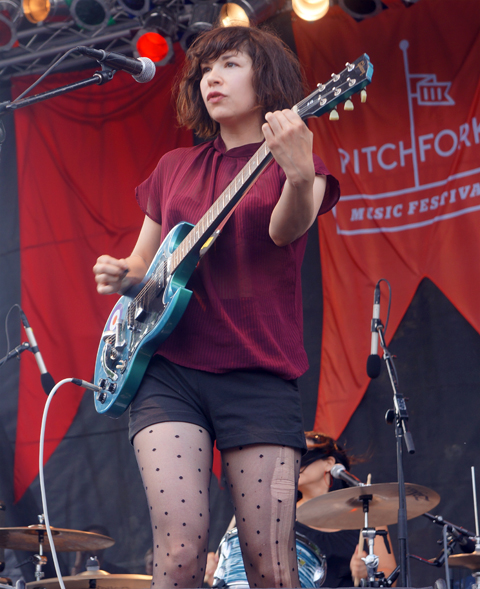 Say what you will about Sleigh Bells (below); their genre-expanding onslaught of booming beats, shredding metal guitars, and party-inducing shrill vocals has both excited me and bored me to death, but the duo know how to put on a show. Heavy dub-inspired beats burst from the speakers as singer Alexis Krauss emerged in torn fishnets and a leather jacket from behind a wall of Marshall stacks. Krauss is the main draw for the band. Confident and sexy, she never stops and never lets the energy fall, her jet black hair flailing while she head-bangs and dances across the stage with the chest-thumping bravado that most musicians can never reach but that she is able to embody after just a short couple of years in the spotlight. Sleigh Bells captivated the audience for their entire set, thanking those that have been with them since the beginning playing, playing “Crown on the Ground” from their first bedroom-produced EP. They delivered what the crowd wanted and proved that they don’t have any plans of changing what they do any time soon. 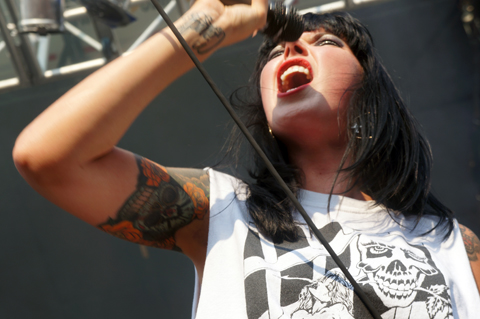 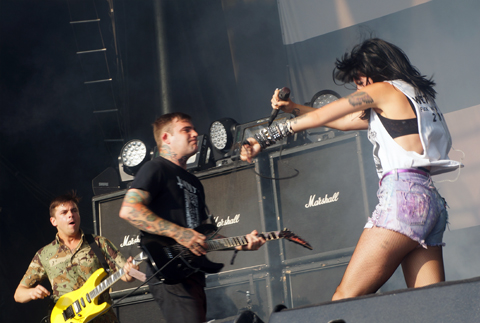 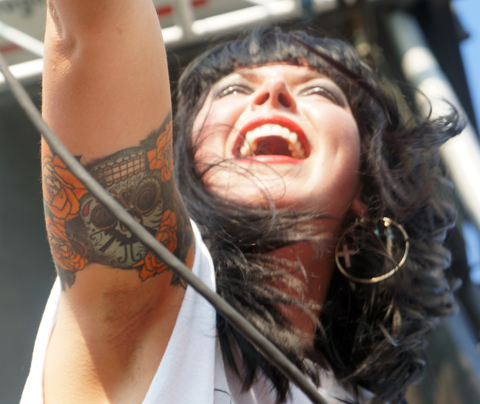 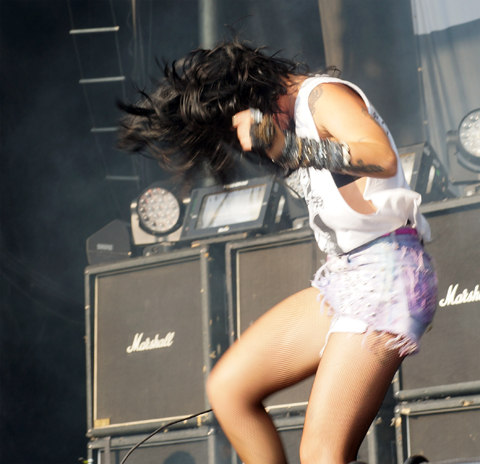 Hot Chip performed; they are always awesome, and always a treat to see live. Understated and confident, they quietly took the stage and eased into their performance as the crowd started to bop along. Songs “Over and Over” and “One Life Stand” got everyone smiling and dancing along and they even performed a beautiful cover of Fleetwood Mac’s “Everywhere.”

A Hot Chip performance is never disappointing; it just seemed like they needed and deserved more time and a bigger stage. My main gripe for the festival was that I didn’t think any of the “headliners” were on par with headliners in years past. For the last few months I didn’t even really know who would be in the headlining slots this year. Godspeed You! Black Emperor (above) and Grimes played parallel to each other closing out the night. Forgive me for saying it, but you’re probably a huge music nerd if you were amped for Godspeed. They play expansive prog-rock, creating songs that are 20 minutes long without vocals. I was in the photo pit for the beginning of their set and I took a bunch of pictures of a guitar player running a ball point pin over his guitar strings, for like 15 straight minutes. I’m not saying they aren’t good because they do make great music that I didn’t mind enjoying from afar, but I don’t understand the choice Pitchfork made to highlight them on the main stage as the last band of the evening. They drew a sparse crowd that didn’t quite reach the sound booth. Give Hot Chip the extra time, give them the bigger stage, and give them the extra lights and let people dance off into the night. 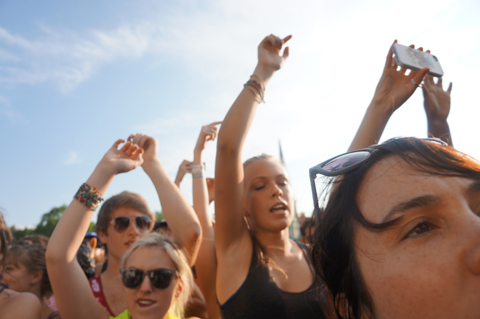