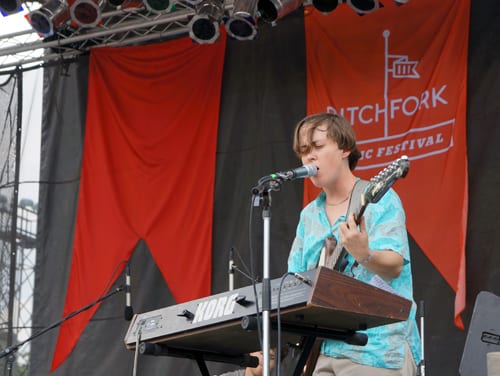 CHICAGO—As the cab flipped a u-turn across a busy intersection a seemingly never-ending line of people snaked around the perimeter of Union Park, dark storm clouds rolling through the sky. Eager Pitchfork attendees filed off the El trying to find the end of the line as street entrepreneurs walked up and down the line selling with bottled water for a dollar, airline bottles of rum for two. Unexpected thunderstorms delayed the start of the Pitchfork Music Festival by about 30 minutes, muddying the field but cutting the temperature by about 15 degrees.

As I walked into the festival I heard some yelling; four teenagers had hopped the fence. Luckily I swiveled my head around in time to see one smack his head on a port-a-potty as he fell to the ground. A little stunned, he got up started running across the field before falling into a muddy puddle. The masochist in me really enjoys watching people injure themselves in stupid ways. I’m not saying you should or shouldn’t sneak into music festivals; I’m just saying make sure you avoid concussing yourself on a portable toilet if you choose to do so.

Music festivals are great for a variety of reasons: getting drunk in the sun, seeing a handful of your favorite bands in one day, and happening upon music you’re unfamiliar with. Waiting in line for a beer, I heard a man start singing a capella, his voice soulful and earnest. For a minute I thought he was sing the national anthem. Intrigued by the man’s beautiful falsetto, I discovered that the voice filled with desire and passion belonged to Willis Earl Beal (below). His tight black shirt hugged his muscular chest as he stood on a metal folding chair, wielding the microphone stand like a sword, and thrusting his hips while singing over a backing track emanating from a reel-to-reel player on stage. The performance had a Gil Scott Heron vibe, alternating between beautiful crooning and preaching through song. I wasn’t familiar with his music before, but it was the type of performance that stops you in your tracks and captivates you for the next 45 minutes. 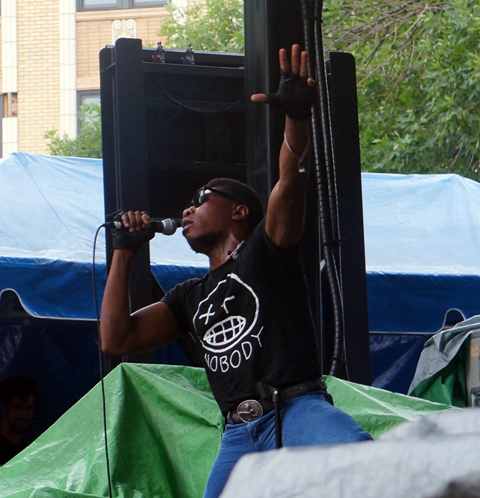 The best performance of the day came courtesy of A$AP Rocky. Buoyed by about 12 hype men, A$AP didn’t even take the stage until the third song, at which point the crowd was so hungry to start partying that the crowd absolutely lost their minds when the phenom rapper came bouncing out onto the stage. Down in the pit I felt like I was going to get a contact high from the overwhelming smell of weed seemingly coming from everywhere. While there is plenty of ethnic diversity at Pitchfork it was more than a little amusing listen to A$AP constantly shout “All you trill niggas and bitches get yo hands up!” while the crowd of mostly white kids eagerly played along. A heard a girl standing to me say, “I’m not sure if I should be doing this, but I guess I feel pretty ‘trill’ right now.” 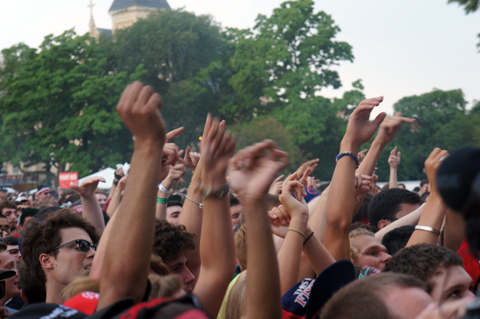 I’ve listened to A$AP Rocky before, not being a huge rap fan, and his recorded music never did much for me. However, he’s incredibly charismatic. He is full of swagger as he requests that weed be thrown on stage. His taste in beats is incredible; at times it comes across as reminiscent of old school hip-hop. He spits lines with a dizzying speed, other times slowing things down over dub-step-like beats produced by Clams Casino. He absolutely deserves every bit of praise and success that he’s received this year.

I arrived at the Blue Stage early, trying to get a good spot to see the Japandroids. The rain having pushed everything back a bit meant that I got to see about twenty minutes of Tim Hecker’s set. I saw it, and that’s about all I can say about it. The experimental producer makes soundscapes that are part baroque and part sci-fi atmospheric hissing. It reminded me of being a kid and playing the computer game Myst. You have to be really into music theory to get much out of it. However, I respect the fact that Pitchfork chooses to spotlight this kind of music production, even at the risk of alienating people. I hear someone behind me—I’m guessing a fellow Minnesotan—exclaim, “I’d rather be listening to Denny Hecker.”

The Blue Stage area was packed from fence to fence as Japandroids annihilated their set. They play with so much raw energy and rock so loud that they are appropriate for any setting. They thundered through their set, playing off each other more than they did at their recent performance in the Entry: extending bridges with drum fills, looking to each other for cues before dropping back into the chorus of each song. I saw them less than ten days before they took the stage at Pitchfork, and I was still blown away by how great they are. They can rock any size stage, which is good because judging by the size of the Pitchfork crowd, the stages they get asked to play are just going to get bigger. 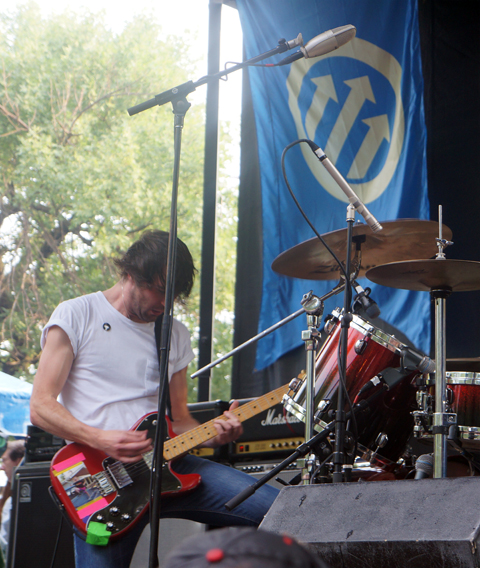 The rain earlier in the afternoon messed with the predetermined set times, which ended up being a blessing for me because I was able to catch more of the Dirty Projectors than I anticipated. The indie favorites are touring in support of their truly fantastic, and relatively mainstream, new album Swing Lo Magellan.  As the day transitioned into a cool Chicago evening the art-house six-piece band’s Afro-pop was the perfect soundtrack to just sit back and take in the entire setting.

Closing out the evening on the smaller Blue Stage was the much-buzzed-about Purity Ring. Translucent orbs suspended in the air across the stage changed color to reflect the tone and intonation of the electro-pop beats being directed by programmer Corin Roddick. Singer Megan James twirled across the stage with the carefree nature of a child running around the yard catching fireflies. The duo’s music, while electronic, based in having dub beats and synths, has the feeling of being pastoral too. Comparisons to The Knife and Björk make perfect sense; it sounds like something birthed out of a forest. This being the first time I’ve been about to see them, despite loving every single they’ve released over the last year, and I found their performance to be mesmerizing. I loved watching how the duo supported each other, Megan alternating between beating an illuminated bass drum on one side of the stage and then making it over to Roddick’s station in time hit the translucent bulbs, triggering different beats. Before exiting the stage James thanked the crowd, saying “I’m think this is the most amount of people we’ve played in front of.” While I still feel like they need to add a palpable energy to their show, Purity Ring definitely belong on your must see list over the next year. (Purity Ring open for the Dirty Projectors at First Avenue on Sunday, July 15). 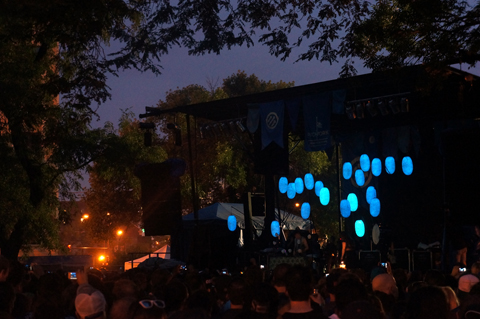 Friday was a nice introduction to the festival: busy enough that you were always moving around, but not as overwhelming as Saturday is going to be. I’m looking forward to seeing how fans of Deerhunter split their time between Atlas Sound and Lotus Plaza. Sleigh Bells and God Speed! You Black Emperor are both rocking the big stage today. Judging by the buzz, a lot of people can’t wait for Danny Brown’s evening performance. I’m most excited to stuff my face with vegan gyros, dance to Hot Chip, and have my face rocked off by the black metal of Liturgy.