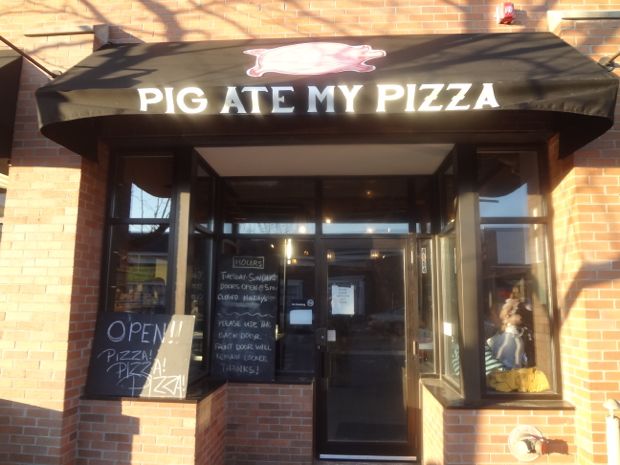 Did you ever wonder what would happen if the wild and crazy guys behind Travail Kitchen & Amusements opened a pizzeria? Would they, like, create a foie gras pizza? Or a Mussels from Brussels pizza, as a tribute to Jean Claude Van Damme, topped with mussels, brussel sprouts, and chorizo? Or maybe an appetizer made from pig feet and cheeks, and call it hoof-n-mouth?

Travail, which put Robbinsdale on the foodie map with its innovative combination of molecular gastronomy and short order cooking, closed last month, and is scheduled to reopen in August in a new location nearby. Meanwhile, the original space has been turned into Pig Ate My Pizza, a pizzeria with a lot of the same what-are-these-guys-smoking panache as its predecessor.

When I visited last Sunday, their third day in business, we were only able to sample a few dishes, but I came away impressed. The idea of topping a pizza with mussels, brussel sprouts, and chorizo sounds weird but worked beautifully, and the idea of serving it with a cup of mussel broth for dipping the crust was inspired. The salt and pepper nugs—$5 for a generous serving—were chewy, intensely flavorful soy-marinated strips of pork flash-fried with a maple glaze.

Pig At My Pizza is a bit more accessible and family-friendly than Travail;  if the idea of pork tartare or foie gras pizza doesn’t appeal, you can get a simple pepperoni ($12) or margarita ($11) pizza. The basic crust is a traditional hand-thrown thin dough, puffy around the edges, with a gluten-free option available on request, but a couple of the pies are baked on a deep dish brioche dough—the piggy pizza, topped with bacon, prosciutto, pepperoni and (unspecified) charcuterie ($14), and the foie gras pizza ($18), topped with foie gras three ways, apricot, and fennel.

As the name implies, it’s a very pork-centric menu. In addition to the dishes already mentioned, offerings include a pork belly pizza topped with asparagus and robiola cheese; a ham and apple-topped pizza, and starters such as chi-chis (pork rinds) and guacamole; hog tots, pork ribs, pork and cheddar sausage, and a pork terrine.

There’s not much on the menu for non-meat-eaters, aside from a micro-greens salad and one vegetarian pizza, topped with artichokes, zucchini, and black truffle ($10), but the kitchen was very willing to accomodate Carol, who is a pescatarian—they omitted the chorizo from her half of the mussels pizza, and the pancetta (or was it prosciutto?) from the pasta of the day ($9): housemade fettucine, perfectly al dente with shrimp boudin sausage and sage.

For dessert, we passed on the snickerdoodle pizza ($9) in favor of the banana split bomb ($9)—which brought to mind the mad-scientist Travail of old, as a big bowl was set before us with a puddle of liquid nitrogen at the bottom—then a smaller bowl of hard-frozen caramel ice cream filled with sliced bananas and banana bread and maraschino cherries and pecans is dropped into it, and shatters upon impact. Delicious.

Pig Ate My Pizza does not take reservations. When we called ahead, we were told to expect a wait of up to an hour, but it was really more like 15 minutes. Open Tuesday to Sunday from 5 to 10 p.m.