Today I went on a very nice cruise down the St. Croix river with a bunch of religious, limited government conservative activists.

The keynote speaker was Minnesota House Representative Doug Wardlow of District 38B. Here we are together, getting along fine: 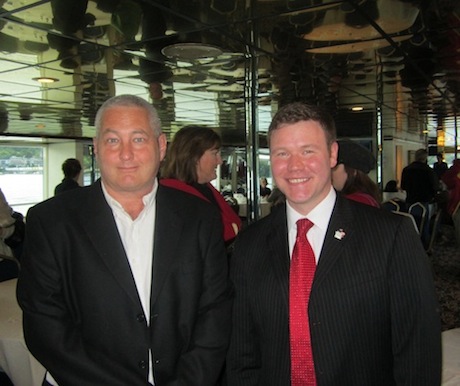 Now here’s another nice picture of me, this time with controversial radio Pastor Brad Brandon, who delivered the blessing before lunch: 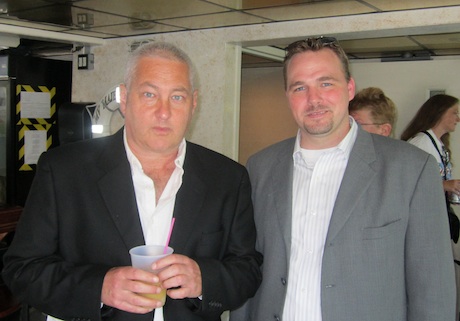 We all got along just fine, largely because no one on the boat knew who the hell I was or what I’ve written about Minnesota conservative and the conservative evangelical right.

Well, strictly speaking, after I introduced myself to Rep. Wardlow he did indicate that he’d heard my name somewhere before. He asked me where I blogged and I answered “the Minnesota Progressive Project,” and that was the end of our exchange.

I did tell him that I enjoyed his address to this crowd of like-minded conservatives–and that is true, I did. Wardlow delivered a talk on what he called “American exceptionalism.” The main message of the talk was that America is currently headed off the edge of cliff, and that we will lose our freedom if we do not stop and turn back to the point where this country got off on the wrong track. The villains of Wardlow’s story are fellow Americans who believe in big government.

Of course I disagree with Rep. Wardlow’s worldview, analysis and his dire conclusions about the consequences of not believing him.

Our scenic cruise down the St. Croix river was hosted by the 56 club of Minnesota, who describe themselves as follows on their website:

We’re a gathering of patriotic and conservative minded folks who indeed, cherish and treasure our Country, its’ Foundings, its’ values and principles, its’ Constitution … and who are dedicated to preserving them all and safeguarding America’s future.

We are not “domestic terrorists” or “right wing extremists” whose mission would be to cause trouble.

We’re not paid representatives of any company or industry hoping to stunt our Country’s growth.

We’re Americans who love their country and all it represents!

Well, so am I–and I’m not a “domestic terrorist” or “right wing extremist” either, so we all had that in common.

It was a very low key event, no one raved or screamed. Everyone was very pleasant to everyone else. The crowd gave a standing ovation to honor a Gold Star mom, and incidentally applauded her for obtaining a conceal-and-carry permit.

Before the main event, I drew aside Pastor Brandon of Salem Communications and local Christian radio station KKMS and asked him about the consequences of his decision to endorse candidates from the pulpit at his church. (Brandon had announced his intentions to do so on the radio, prior to the last elections.) According to Pastor Brandon–there were no adverse consequences resulting from his decision.

As a person who studies the Christian right and its effect on Republican and conservative politics, the most interesting aspect of the afternoon for me was the presence and high profile involvement of Brandon and Salem Communications personnel in this event. (During the presentation of door prizes (I didn’t win anything), Brandon announced that he also taught his congregation about constitutional law from the pulpit, which drew applause from the crowd.)