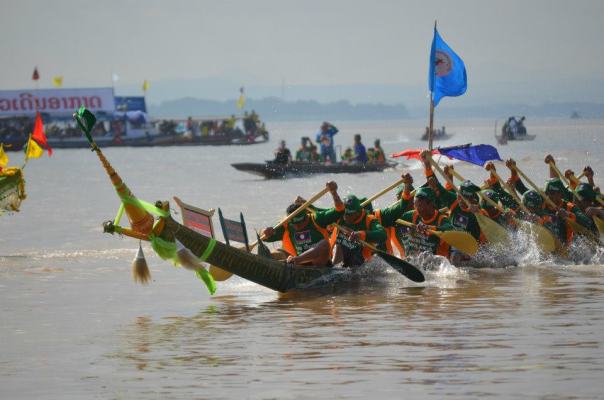 Boun That Luang. I remembered it like yesterday: Glaring bright lights, screeching sounds of live bands, clusters of laughter from the locals flooding in, sweet and spicy aroma tingling curiosity at the tip of my nose. While strolling along the edge of the Mekong River with a bag full of cafe nom yen and stuffing my face with about three freshly steamed sticks of khao lam, a young man tries to sell me a handful of Hello Kitty balloons. My first thought was, oh, consumerist culture sneeking in at its best? After all, it’s Hello Kitty. Who wouldn’t let this furry face of happiness dominate the world? I definitely would.

Boun in its easiest form translates to a celebratory event. If you’re in Laos right now, you’d be at the right place at the right time- enjoying the best boun season to be a part of in the country. It’s the year of the 2-ha-ha-ha big dragon. October was Boun Ork Phansa, November was Boun That Luang and December 2nd was Lao National Day.

This year, LLOTP isn’t in Laos with our friends and family, so we’re celebrating through pictures.

You’ll see a country trying to move beyond the depths of poverty and lingering war. There’s authentic beauty in Laos holding onto the simplicity of its cultural traditions while realizing that somehow, BeerLao and Pepsi go hand in hand. Laos may be embarking in massive development movements to take its place in the competing international economy, but at least its people can share and enjoy in the annual bouns that remind them of the tranquility of their heritage.

Let us bask in these wonderful photos from our photographer friend in Laos. Let us also hope that we can rise to such festive occasion in Minnesota, if not across the US…one day. 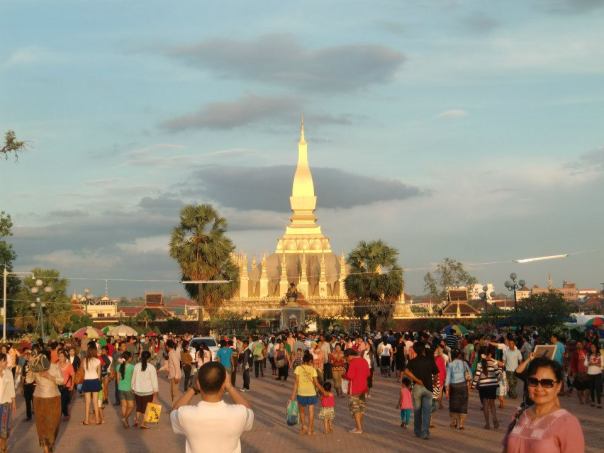 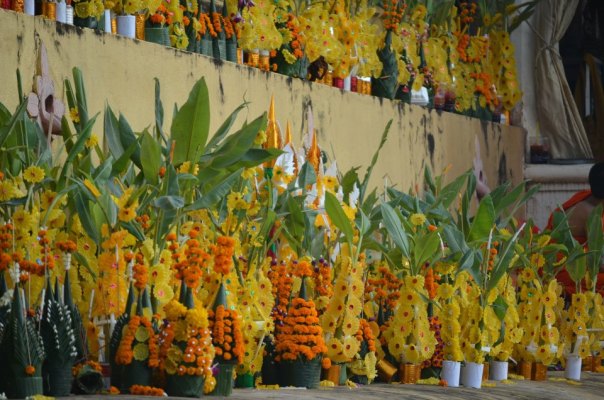 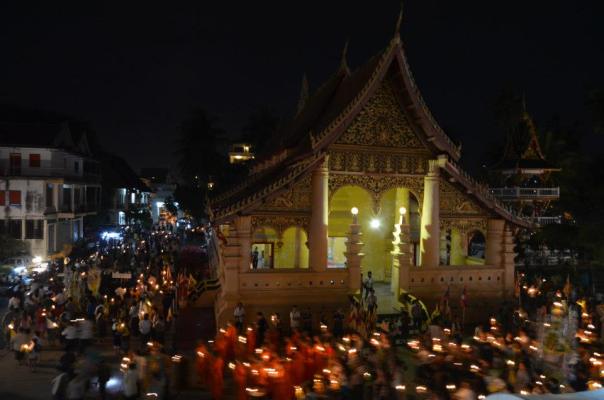 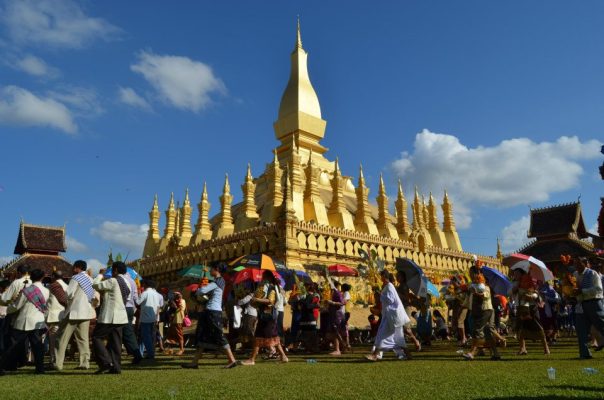 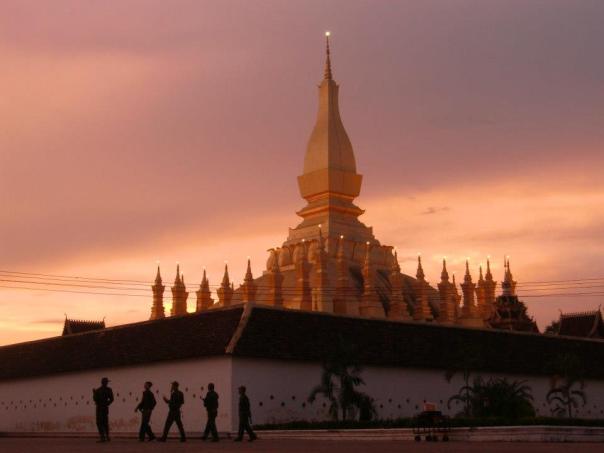 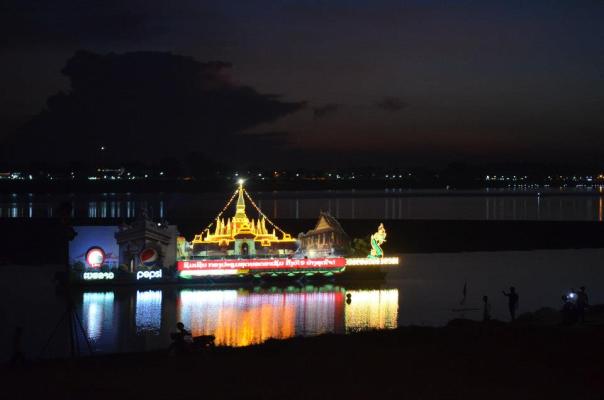 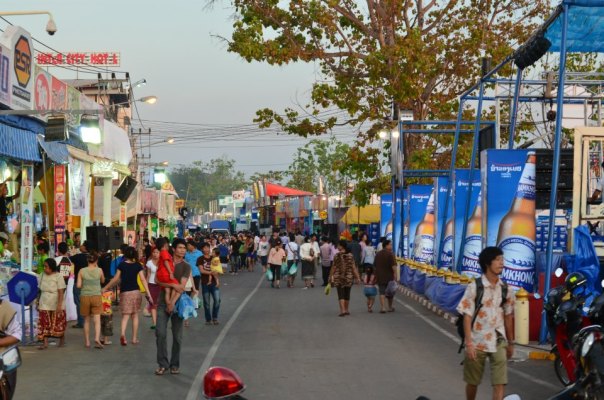 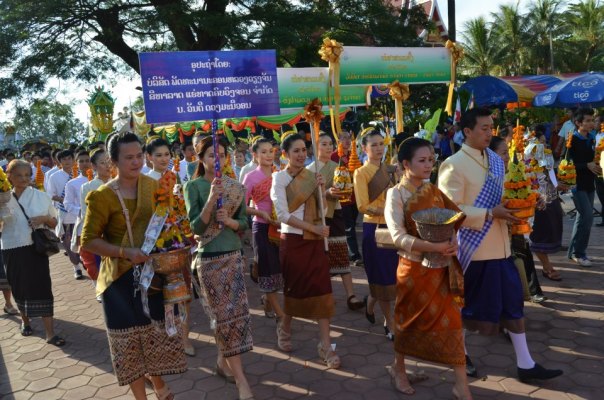 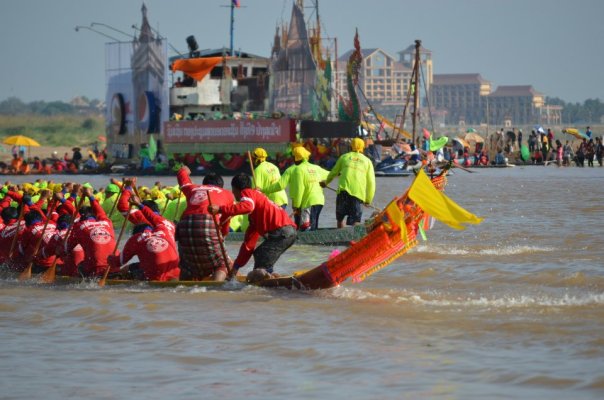 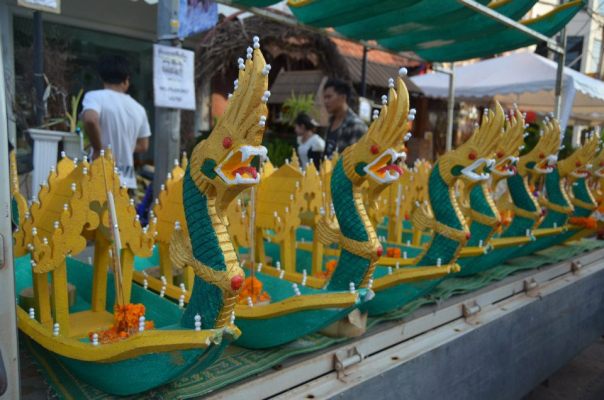 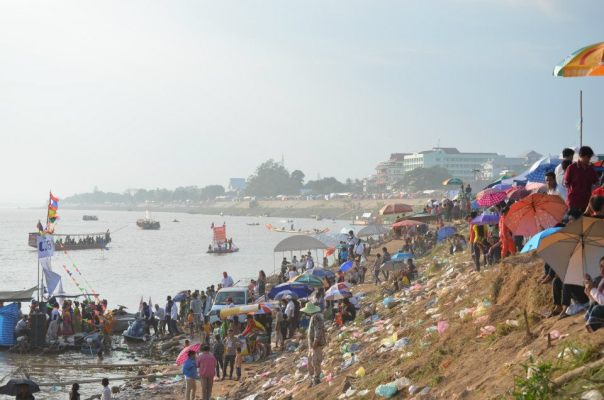 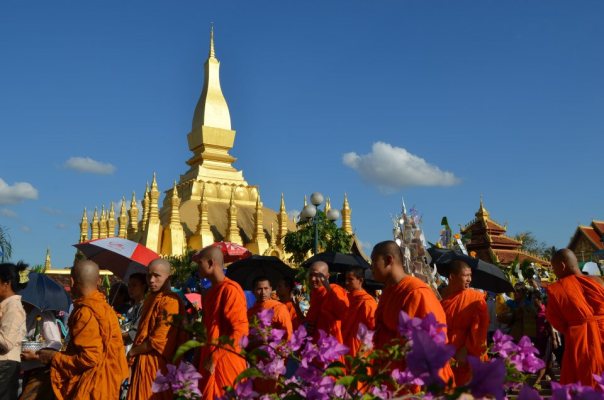 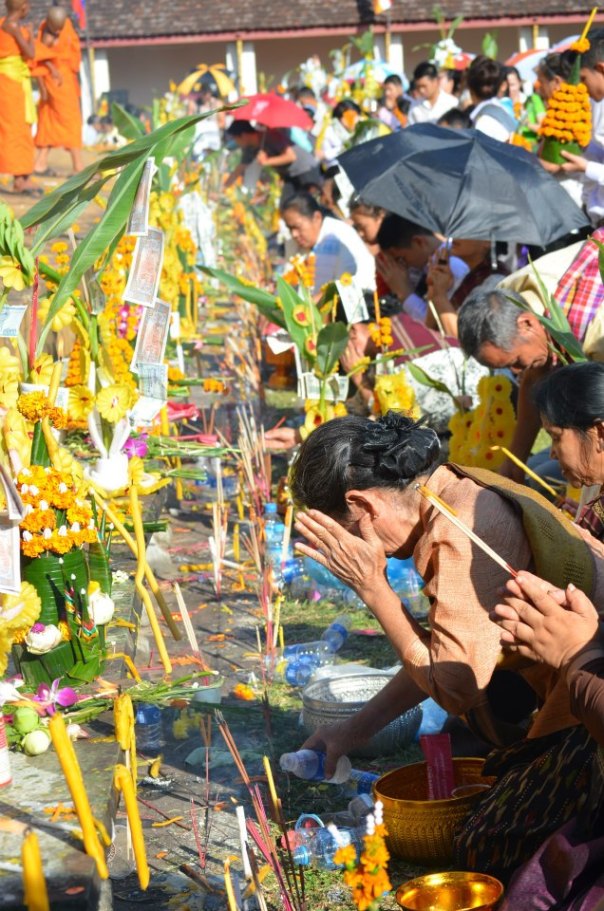 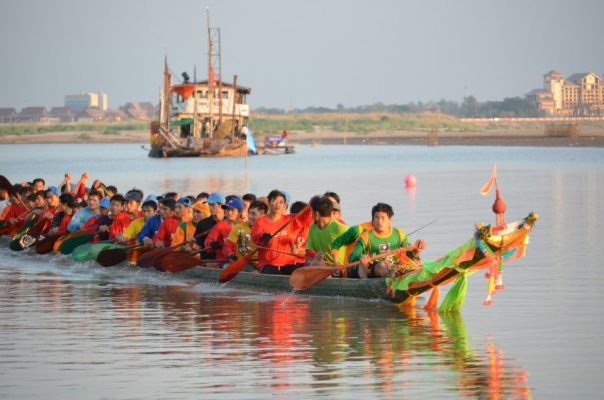 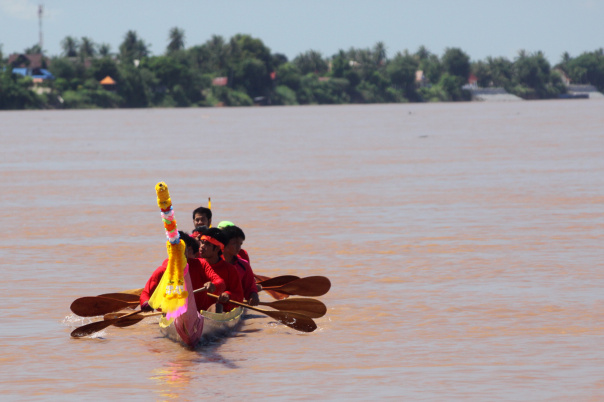 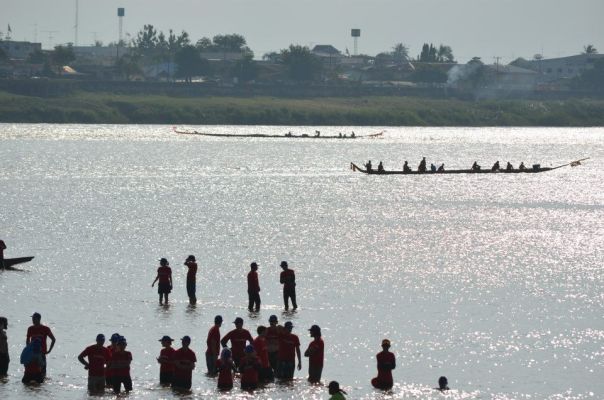 *Photos of Boun Ork Phansa and Boun That Luang 2555 (2012). Photographer: Houmphet Manisouk . [Please do not re-use photos without proper credits to LLOTP and photographer]*

Here’s a relatively accurate outline of bouns in Laos from About.com:

This holiday takes place on the fourth lunar month, celebrating the birth of the Buddha reincarnated as the Prince Vessantara. Monks bring the Vessantara Story Cloth through town in a procession known as Phaa Phawet. Believers make merit by listening to a non-stop sermon on the birth of Vessantara, read from 14 sets of palm leaf manuscript.

Bun Pha Wet is set at different dates in different villages, so Lao townsfolk can celebrate the holiday at home and visit other loved ones at other villages for their respective celebrations. Bun Pha Wet is also a favored time for Lao males to enter the monkhood.

The most scenic celebrations of Bun Pha Wet take place at That Luang in Vientiane and Wat Phu in Champassak.

Vientiane’s considerable Vietnamese and Chinese population celebrates Chinese New Year together; the best places to see the celebrations are in the cities of Vientiane, Pakse and Savannakhet.

Like Chinese New Year all around the region, the holiday’s three days are marked with raucous parties, exploding firecrackers, and visits to temples and family reunions. Vietnamese and Chinese businesses will be closed at this time.

The Wat Phu Festival coincides with the full moon of the third month of the Lao lunar calendar. At this time, the ruins of Wat Phu come alive again, with traditional festivities including buffalo-fighting, elephant racing, and performances of Lao music and dance. Souvenirs are also easy to find here, as a trade fair for traditional products is also held at the same time, with goods coming in from Thailand, Vietnam, and Cambodia.

On the night of the full moon, Magha Puja commemorates a speech given by the Buddha to 1,250 monks who arrived spontaneously to hear him speak. Worshipers circle their temples bearing candles to make merit, and religious chanting fills the air. It’s said the Buddha laid down the first monastic regulations in his speech, and also predicted his death. Magha Puja is best witnessed in Vientiane and at Wat Phu.

The Lao new year commences in mid-April, lasting three days. The whole country shuts down to worship and celebrate – Buddha images are washed, offerings made at the temples, and votive sand stupas are made in yards all over the country. Finally, Laotians spray water gleefully upon one another. As the temperatures are rising at this time of the year, the constant drenching can be a great relief from the heat. For the locals, the water festivities are their way of calling for rain from above.

The most picturesque celebrations of Bun Pi Mai happen in Luang Prabang. Cambodia, Burma, and Thailand celebrate this holiday as well – the Thai celebration is better known as Songkran.

On the sixth full moon of the lunar year, Buddhists worldwide celebrate the Buddha’s birth, enlightenment, and passing away. Celebrations are held in local temples – worshipers hold candlelight processions there, and the day is marked with much chanting and religious instruction.

This noisy holiday traces its roots to pre-Buddhist rain ceremonies, and occurs together with Visakha Puja. Anarchy reigns on this day – the humorous performance art known as mor lam is performed in many places, and in some places, men wear blackface and women carry wooden penises.

The whole festival reaches a climax when townsfolk fire bamboo rockets skyward. The rockets are meant to bring rains from the heavens and irrigate the rice fields.

Khao Pansa marks the beginning of the Buddhist equivalent of Lent – a time of fasting and contemplation for monks, and the best time of the year to enter monkhood. Lao men traditionally enter the monkhood for a brief time before they marry – this time of year is marked with ordinations taking place everywhere.

The monks retreat during this period, settling down in monasteries and forgoing the usual practice of traveling from temple to temple. This begins at the full moon on July, and ends on the full moon in October on the day known as Kathin.

The Lao have immense respect for their dead kin, and they demonstrate it on Khao Padap Din. Lao families exhume their dead and cremate them, then present gifts to attending monks who have prayed on behalf of the dead. Devotees also make offerings at local temples. On the lighter side, this day is also marked by boat races on the Nam Khan River, as well as a trade fair in Luang Prabang.

The three-month Buddhist equivalent of Lent, begun on Khao Pansa, ends on Awk Pansa. On this day, monks roam free from their respective temples, and are presented with gifts from worshipful townsfolk. As evening falls on Laos, people release banana-leaf boats with candles and flowers on top, a ceremony known as Lai Hua Fai (similar to Loy Krathong in Thailand).

Riverside cities like Vientiane, Savannakhet, and Luang Prabang celebrate the day with Bun Nam boat races along the Mekong.

The stupa of That Luang in Vientiane plays host to this festival, as monks gather here to accept gifts and alms from worshipful townsfolk. For a whole week, the temple comes alive with fairs, contests, fireworks, and music, topped off with a “wien thien”, or candlelight procession, around That Luang.

An international trade fair also takes place during Bun That Luang, promoting tourism around the countries in the Mekong sub-region.

While all Laos celebrates this festival at their local temples, the celebrations are obviously more vibrant in Vientiane.

On December 2, 1975, the proletariat finally prevailed over the monarchy. The government marks this day with parades, speeches by Lao politicians, and displays of the hammer and sickle everywhere. Poorer communities sometimes postpone their Awk Phansa celebrations to coincide with Lao National Day, saving themselves the considerable expense of celebrating two major holidays only a month apart.