You might have missed it, but an interesting spat is brewing on the Twin Cities’ transit scene. Last month, the Minneapolis City Council unanimously supported funding a streetcar project that would from Central Avenue in Northeast Minneapolis, down Nicollet Mall, and all the way to 46th Street in South Minneapolis. Soon after, the Met Council, who runs the Metro-wide transit system, sent a fascinating open letterto the city.

The letter itself is a masterpiece of “Minnesota Nice” passive-agressiveness. Council Chair Susan Haigh subtly words threats to make them sound inconsequential, and the letter’s complements are softly backhanded. You can read a nice summary from the Pioneer Press here. (Or if you prefer, I annotated it on my website using an advanced “language filter” that translates Minnesota Nice into snarkasticly blunt English.)

A fight over streetcars is nothing new. Here on this website, we’ve had plenty of discussions of streetcars, both pros and cons, and many transit fans remain skeptical about whether they’re a good investment.

On the one hand, detractors argue that streetcars are little more than gimmicks, cute but expensive projects that have some sort of svengali-like hold over yuppies (which is why developers like them so much). They’re inflexible, slow, and costly, and the money would be far better spent on buses. On the other hand, streetcar supporters (like myself) argue that they provide advantages beyond illusions of permanence. They’re quiet, spacious, and offer smoother rides. I’ve heard them called “pedestrian accelerators” that catalyze walkable cities while calming traffic.

The debate hinges on exactly how much of a “streetcar boost” we assign to them. Will they increase bus ridership by 50%, 100%, or only marginally? The answer to this question is vague and unresolvable, and it’s why streetcars lie at the crux of this “transportation” vs. “economic development” debate.

At the risk of picking sides among friends, I’d suggest that the streetcar proponents either make a compelling case for the travel advantages of adding trolleys to the Twin Cities transit system, or else find different ways to pay for them: the value-capture property tax plan already approved by the Minneapolis City Council and/or state and federal funds earmarked for economic development, not transportation.

In other words, a streetcar project shouldn’t get regional or state funding unless it serves a “transportation purpose.” And because it is nearly impossible to show that streetcars are faster or more efficient than buses, and because their ridership gains are difficult to quantify or attribute to traditional criteria (like cost and time), the vast majority of funding for streetcars should come from strictly local sources.

The Case For Minneapolis Streetcars

The problem with deFiebre’s ultimatum is that you can never separate transportation from economic development. Every transit project is an “economic development” project. Every freeway, every light rail stop, every commuter rail, even each bus route changes the economic linkages of the land surrounding it. 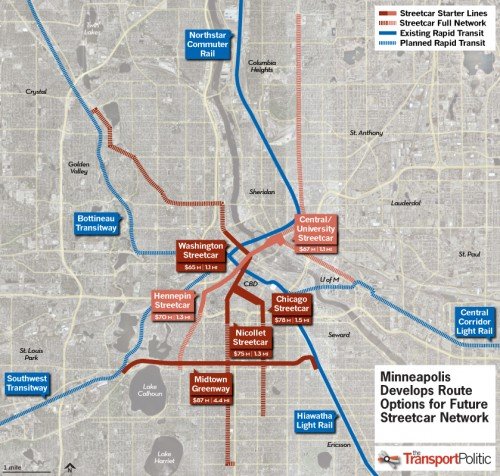 For example, you cannot possible justify the three Bloomington LRT stops along the Hiawatha line, or the “red line” BRT without including future plans to spur economic development. Likewise, both the Bottineau and the Southwest routes bypass Minneapolis’ already-existing density in favor of promoting “transit-oriented development” in the Wal-Mart laden suburbs.

While the Met Council does pay a great deal of attention to “local interest” when sorting out the prioritization queue for transit projects, judging by recent investments, their priority seems to be the Sisyphean task of getting suburban drivers out of their cars. Apart from the Central Corridor, almost none of their recent investments have focused on improving transit within the core cities.

David nicely summed up the two sides of this transit investment coin in a recent piece on transit and density:

In life, there are two basic strategies: Prop up the weak or reward the strong.

David was talking about focusing transit investments using buses, but in many ways, the situation here is the same. Like it or not, promoting transit ridership in the most of the sprawling Twin Cities’ suburbia is a lost cause. Rather, focusing on the places that already promote mixed-use and density provides far more bang for the buck.

This inconvenient truth means that the majority of transit investment should focus on the core cities and a few inner-ring suburbs, something that the Met Council is loathe to do for political reasons. From this perspective, Minneapolis shouldn’t sit on its hands, and wait around for the Met Council to get around to investing along key commercial corridors like Nicollet and Central Avenues. From this perspective, they need to be as aggressive as possible, and step out in front of the Met council’s sluggish pace, demading transit investment in the few places where it’ll do the most good.

That said, the Minneapolis plan is far from perfect. Even aside from the usual questions about whether streetcars are good transit investements, Minneapolis’ use of a pioneering “value capture” plan to tentatively fund the project comes with a few qualms. 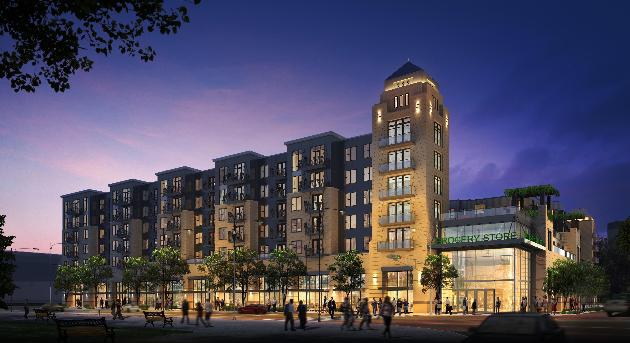 Right: 222 Hennepin, one of the properties that would be in the “value capture district.”

First, there’s the issue of using TIF-like scheme to pay for an investment. Typically, TIF money requires that a project pass a so-called “but for” test. (I.e., “but for” our streetcar project, this development would never have occurred.) This project very explicltly uses projects already underway and “captures” their added taxable land value to pay for its capital costs. No matter how you feel about TIF funding (and many people are against the idea), it seems disingenous.

The second problem is about the regional consequences of using this kind of funding stream. If Minneapolis builds a streetcar using value-caputure TIF money, it’ll set a precedent for any other city that follows in its foosteps. In other words, rather than streetcars being funded through the typical state and local balancing act, 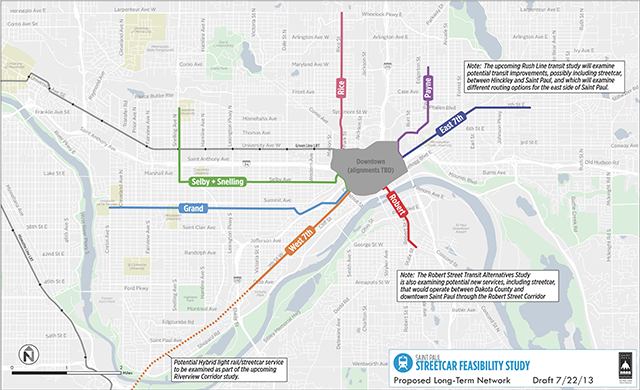 Mostly this would affect Saint Paul, which just released its ideal streetcar plan. But down the road, any other city wanting to build a streetcar line would likely have to use similar TIF-based accounting trickery to fund it. And few cities besides Minneapolis are likely to do so. As one transit planner told me the other day, Minneapolis’ plan will mean that “the rich get richer…”, and lead to increasing inequality in the Metro area.

In the end, despite the dubious funding stream, I think Minneapolis is right to squeeze the Met Council’s shoes on transit priorities. To me, the Met Council argument that streetcars are for development, while light rail is about transportation doesn’t hold much water. The real difference is that streetcars are intended to promote core-city urban development while light rail is intended to promote suburban development. Neither of these is a sure thing, but down the road, I have a lot more confidence in Nicollet Avenue’s ability to promote growth around high-quality transit than I do for some parking lot in Robbinsdale or Eden Prairie.

At the very least, watching this funding stream pissing contest for the next few years should be fun…