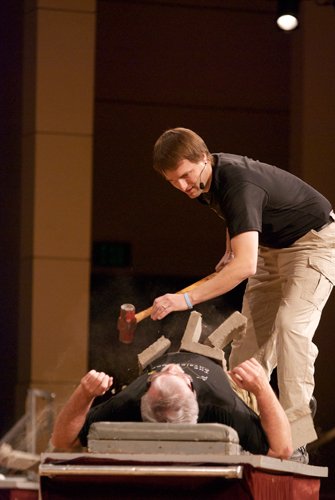 The Physics Force Circus was held at the Northrup Auditorium at the University of Minnesota last Thursday January 15th.  It might not sound like the most exciting event on the surface but when you have cannons firing off ping pong balls at 600 mph and cannisters being shot at a live human being there was plenty of fun to be had for all in attendance.  As University of Minneosta physics Professor Shaul Hanany told the audience several times “physics is fun!”

The demonstrators, mainly current and retired high school physics teachers in addition to Professor Hanany, were definitely having a good time demonstrating the power of the laws of physics to the audience.  The audience, in turn, seemed to be kept engaged throughout the nearly two hour show.  There were many children in the audience and the kids seemed to be having a lot of fun, even the younger kids, which is really an accomplishment all on it’s own.  Is there really any better way to prove that physics truly is “fun”? If kids are having a good time the teachers must be doing something right.

A little time was spent demonstrating the visual and auditory effects of sound waves at the beginning of the show.  A good deal of time was devoted to demonstrating to the audience how powerful air pressure is.  Showing off the power of “simple” air pressure culminated in Aaron Pinski, a science teacher at John F. Kennedy High School in Bloomington, being suspended several feet up in the air whose mass was soley held up by two suction cups that were being held together by nothing more than the change in air pressure when the two suction cups were clasped together.  This was followed up by the biggest kid-assisted demonstration of the night when Claire Hypolite, a science teacher at Edison High School in Minneapolis was recreating an experiment from the 1600s when scientists of the era were trying to determine how powerful air pressure was by tying two teams of horse to a piece of rope held together by nothing more than two suction cups held together by air pressure.  Just like the horses from the original experiment the two teams of kids were unable to pull the suction cups apart.  This clearly showed that no amount of earthly force can break the power of air when two different air pressures collide.  So now I know why tornadoes are so powerful.

There were a few demonstrations showing off the power of collisions, the most memorable being the ping pong ball crushing a pop can when hurtling through the air at 600 mph.  Retired high school physics teacher Hank Ryan set up two wine glasses full of Kool-Aid on either end of a wooden board but the glasses didn’t break because Hank drove his stick through the middle of the board at a faster rate then the wine glasses could react to the collision.  There was a rather cool experiment showing the effects of air when water heats up and then rapidly cools down inside of a 55 gallon barrel.  The air pressure outside the barrel quickly drops and causes the barrel to implode in less than a minute because of how highly pressurized the outside air is above, around, and underneath the barrel.  This is the sort of thing we never think about until we’re exposed to some zany experiment such as a barrel being destroyed by air and then our brains might get stimulated for a few moments taking in the wonder of the laws the natural world lives by.

The last demonstrations of the evening revolved around the center of mass, which highlighted just how important this particular law of phyics is.  Three plates, two wine glasses, and a bird bath could be stacked up one on top of the other but they just slightly moved after retired high school physics teacher Jack Netland quickly pulled a tablecloth out underneath them because the display’s center of mass wasn’t disturbed enough to drag the items and break them into small glass and ceramic fragments on the floor.  The last demonstration of the night showed the two end supports being pulled away from a large and heavy model train that was only being held up by its middle support due to its center of mass being directly over the middle support.  I will have to keep the center of mass in mind the next time I lose my balance in Yoga.  Maybe this knowledge will help me keep my balance?

It might be hard to go away with the fact that we were witness to the natural laws of the world in a show where toilet paper was being shot up into the air by an electric leaf blower but that is exactly what we in the audience were witnessing in front of us on the stage.  When the laws and forces of physics are shown and explained to us in such a dramatic fashion it is simple enough to say to ourselves “well, duh, these laws are obvious.”  Science seems to in fact make these laws obvious but before these laws were revealed and discovered by scientists due to observations, experiments, and theoretical insights they were and are anything but obvious to most of us.  As the Physics Force Circus so masterfully shows the laws of physics are the laws of the natural world and, essentially, the laws of how EVERYTHING works.  I personally have never found the field of physics to be very exciting but it would be impossible for me to deny its central importance to the natural world around us that we are all a part of.  We and everything around us are bound by the laws of physics.  The Universe is captive to the laws of physics.  It is a very remarkable achievement for a discipline that so many of us, including myself, believe to be boring.  Maybe the fact that physics attracts so few human beings into figuring out its mysteries but that it ultimately runs the world and the Universe is the true beauty of its nature.  I’d like to think that’s what the stars of the Physics Force think, anyway.  Then again, they find physics to be the exact opposite of boring.  They find it to be perpetually…fun.